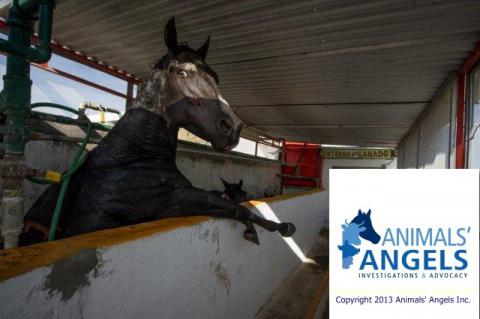 Evidence obtained through investigations conducted throughout 2012 proves that horse meat imported from Canada, Argentina and Mexico and sold in Switzerland was produced in violation of EU as well as Swiss animal welfare standards. Additionally, we were able to prove that labels on packaged meat throughout Switzerland contain false information and that contrary to the claims of importers and distributors, the horses are not transported, cared for and slaughtered according to EU and Swiss standards.

While it is true that all slaughter plants exporting meat to the European Union must maintain an EU certification, the same cannot be said for holding facilities and transport.  EU regulations do not apply in non-EU countries and the animal welfare laws in the production countries do not offer comparable protection for the horses.  Slaughter horses face transport times of 36 hours or more, without access to food or water.  Unlike in the EU, transport trailers do not provide single stalls, ventilation or water systems. The investigation found horses crammed into trailers in large groups, horses suffering in parked trailers for hours in 100 degree heat and horses being trampled to death by others.

The feedlots, thousands of horses are kept inside barren pens at any given time without protection from the elements and with limited space to move around.  Access to food or water is limited at best. Emaciated, sick or injured horses are left to die without assistance.  Our investigators documented the most despicable acts of cruelty and horses forced to die a slow and inhumane death.

Even the required EU certification for slaughter plants is no guarantee for humane treatment. Horrific video footage obtained by the Canadian Horse Defense Coalition from two of the Canadian slaughter plants shows ineffective stunning with horses being shot multiple times. Despite this glaring evidence, both plants continue to export to Europe and Switzerland where the meat is sold by large scale grocery chains such as Migros.

Suppliers worked hard to keep European consumers in the dark regarding the cruelties of horse slaughter and the innate health risks involved with eating horse meat. Veterinarians in the United States have warned about the possible contamination of American horse meat for years.  Use with_race_horse_sectionThe fact is horses in the U.S., especially former race or performance horses, invariably have a multitude of pharmaceuticals in their system including de-wormers, hormones, and Phenylbutazone (“bute”), all of which are not safe for humans.

There have been several incidents recently where random samples of horse meat imported into the EU tested positive for drug residues. The latest FVO report from Mexico actually confirms that “the system in place for identification, the food chain information and in particular the affidavits concerning the non- treatment with certain medical substances…..are presently insufficient”.

End the demand and the supply aspect ends as well.  In 2008, these efforts by Animals’ Angels USA, in a campaign with GAIA, resulted in horse meat being removed from Belgium grocery stores. Belgium consumers were appalled to realize they had been misled by the marketing practices of the meat distributors.

In 2012, Animals’ Angels USA and our European Ally TSB took the awareness campaign to a new level with the most in-depth research and investigations ever conducted.  We completed 12 solid months of investigations in no less than 5 countries, with our investigation results being reviewed by three different Swiss veterinarians.  We spent hundreds of hours of research identifying all of the large horse meat exporters, importers and distributors, analysis of their statements and comparison to investigative results, detailed examination and comparison of animal protection laws in Mexico, the US, Canada, Switzerland and the EU.  Our strong dedication to this issue has a critical purpose; to not only save the horses but to also make the public aware about the contents of the products they are eating.

Our commitment to thorough investigative reporting has led to an explosive exposé that was released via Swiss television.   “Kassensturz,” a highly rated investigative reporting show concentrating on consumer issues, devoted an entire episode to our global campaign and the evidence discovered in our 2012 investigations.  Kassensturz has a broad reach in Europe and undoubtedly the evidence uncovered in the report came as a shock to their audience and has a far reaching effect.  This exposé, which aired on February 19, 2013, was a culmination of our year-long investigations and was an important and powerful step to not only raising consumer awareness but also promoting permanent change.  As a result, retailers like Aldi, Lidl, Denner und Volg have already taken their horse meat products off the shelves. Other major media outlets are expected to pick up the story as well.