At the beginning of the 20th century, the average annual milk production of a Holstein cow was 7,000 lbs. Just one hundred years later, in the push for increasing profits, that number has jumped nearly three times that amount – to 19,000 lbs per year.

Selective breeding to increase a cow’s output of milk has had devastating effects on the cows themselves. Today, a dairy cow can only be kept between 3-5 years. After this time, her body becomes so calcium-depleted, her feet and legs so weakened, her body so emaciated, that it is no longer cost effective to keep her. She becomes what the industry calls a “cull” or “spent” dairy cow.

The "spent" cows our investigators see at livestock markets and slaughter plants across North America are heartbreaking. These cows are often lame, emaciated, and weak. Lameness has many causes including sole ulceration, laminitis, and hoof rot. Some cows have internal disorders such as twisted stomachs, torn udder ligaments, acute or chronic mastitis (a painful bacterial infection), or are simply so weakened that they become what the industry calls “downers."

Downers are non-ambulatory animals that are unable to rise, to stand, or to walk without assistance. They may be non-ambulatory for a number of reasons: broken or dislocated hips, broken leg bones, ulcerated or infected hooves, or severe exhaustion. The majority of these "downers" are in fact spent dairy cows. As soon as their milk production drops, they are sold at auction for slaughter. The transport to the slaughter plant can be very long for these weakened animals - in the United States, cows can legally be transported for up to 28 hours without food or water. 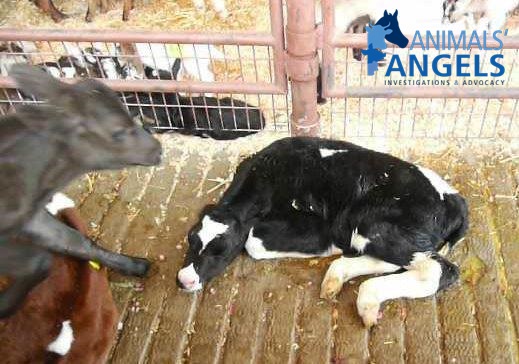 Calves are the by-product of the dairy industry. For maximum milk production the cows have to be kept pregnant. The calf is taken away from the mother immediately after birth. The male calves are processed into veal. Veal calves generally spend their lives alone, in extremely small crates, and deprived of all iron to a state of anemia to ensure their flesh remains pink and tender. They are typically slaughtered as babies between 14 to 16 weeks of age. The female calves become the next generation of dairy cows. Sadly, even non-ambulatory calves have been observed at auctions.

While "spent" dairy cows make up a large portion of the downed animals found at auction, they are by no means alone. Downed animals of all kinds are all too often seen at sales across the country. These animals need and deserve better, which is why we will not rest until long-term changes and improvements have been made across the board.

Read our in-depth compilation report regarding the appalling, ongoing issues of downer cows found at a California auction here.

A 2017 investigation uncovered horrific abuse of a downed Angus bull in Montana. You can read that report here.