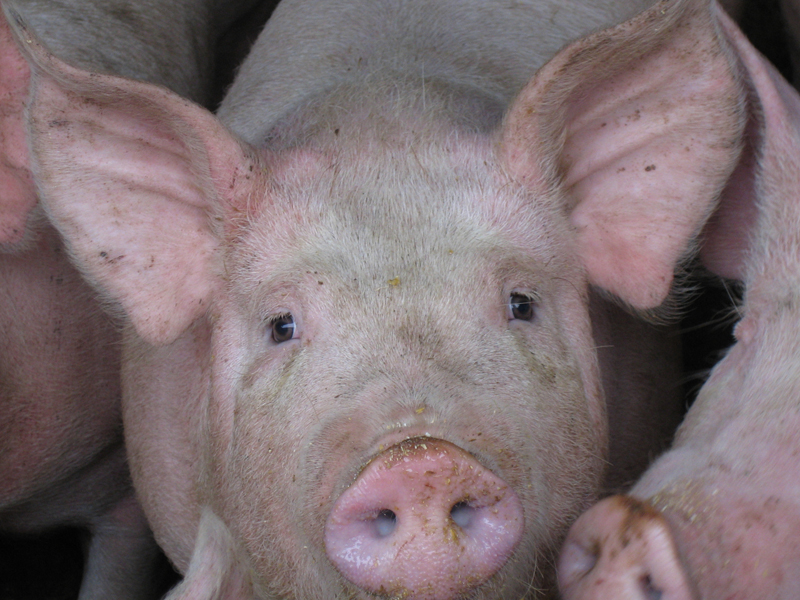 Animals’ Angels is committed to ensuring all animals are treated humanely. Factory farming is an often-found culprit of inhumane treatment of livestock.

One such example is the use of Gestation Crates

Sows are female pigs used for breeding purposes. They become “culled” at the end of their peak reproductive years – at about 24 to 30 months of age. They are then sent to slaughter for their meat which is turned into sausage links and patties.

Living Conditions: The life of a sow is one filled with misery, deprivation, chronic frustration and heartache. The majority of these live all of their adult lives in metal barred cages about 2 feet wide by 7 feet long called "gestation crates." Gestation crates are used to keep as many pregnant sows as possible in an enclosed space – a space so small that the sow cannot turn around, Sows in these stalls are capable of taking just one step forward and one step back. This tight confinement is where the sow must eat, sleep, urinate and defecate on a floor consisting of bare concrete with no straw to lay on.

Body Size: As a result of selective breeding sows are becoming larger at a younger age, meaning many are so large that their sides permanently rub on the bars along the sides of the crate, causing pressure wounds and near immobilization.

Breeding: All breeding sows are kept perpetually pregnant giving birth approximately every 4 months (3 months, 3 weeks, 3 days). All of her natural instincts to make a nest to keep her soon-to-be born piglets safe and warm are thwarted as she is provided with no straw to dig in. Immediately before giving birth, the sow is moved to a “farrowing crate” – a cage that will keep her separated from her piglets but still allows them to nurse off her. Within a few days (10-21) her piglets will be taken from her and the insemination is repeated again.

Health Issues: Because of their intensive, prolonged confinement, sows are in a particularly compromised state of health by the time they are transported to slaughter. These poor animals often suffer from crippling arthritis, which fuses the bones in their legs together causing extreme pain and lameness. They also suffer other bone and joint problems such as weakened bones and fractures. Because of selective breeding, their bodies grow too quickly for their hearts to keep up causing them to be prone to severe respiratory distress and heart attacks.

The Solution: Alternatives to sow stalls do exist and are in use in many countries. Group housing on straw is the simplest model and one that’s been around for hundreds of years. It allows groups of pregnant sows to freely walk around, root, and create nests. Sow stalls are already banned in Great Britain, Denmark, Sweden, and Finland. Since January 1, 2013 the use of gestation stalls is illegal in the entire European Union. In the United States, Florida, California and Arizona have voted to ban the stalls in their states. It is now time for the other states to follow.