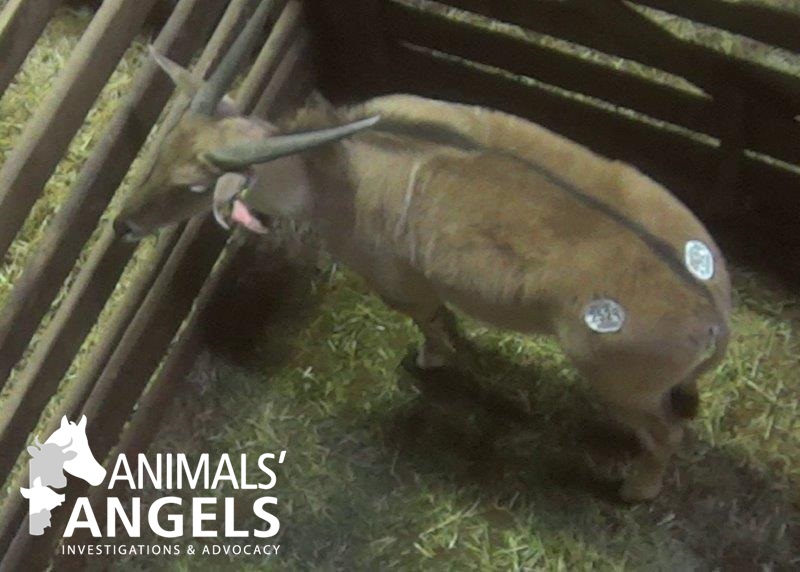 Animals’ Angels investigators returned to the exotic animal auction in the small town of Mt. Hope located deep in the Ohio countryside. This auction, managed by the Mullet family, is one of the largest exotic sales in the country and is held several times per year.

The three day event features large animals such as camels, water buffalo, zebras, llamas, antelopes as well as many reptiles, snakes, tortoises, and exotic birds of all kinds. 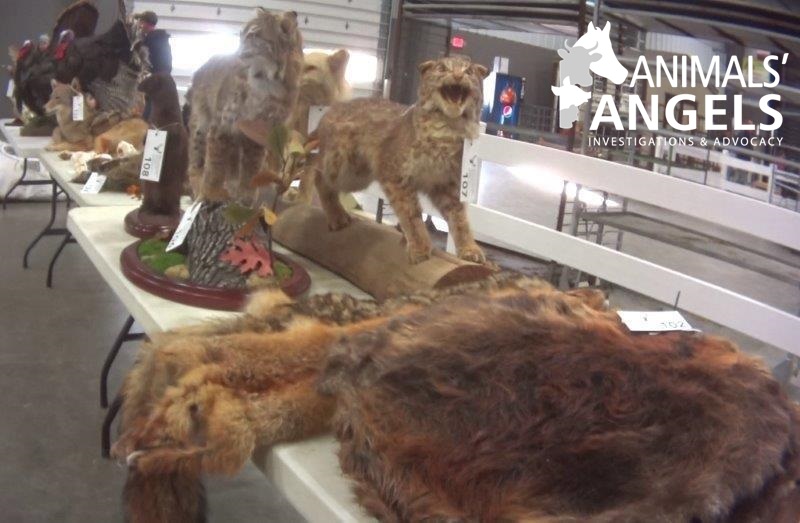 Additionally, the auction has a trophy head and pelt sale with coyote, beaver, and fox pelts available as well as stuffed bobcats, black bears, and bighorn sheep skulls, among other so-called trophies.  Alligator skin purses and the like were also sold.

Investigators arrived at the sale on Saturday morning at 8:00 am. The reptile, small animal, and bird auctions were already concluded at this early stage and the sold animals were waiting to be picked up. 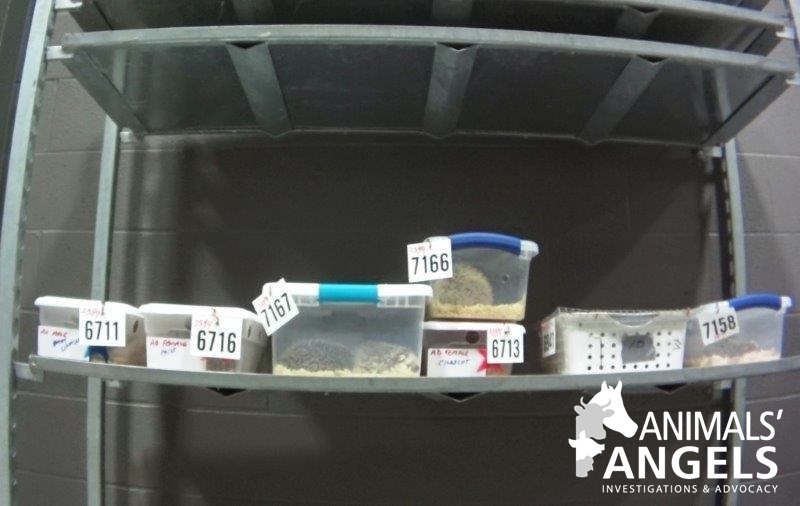 There were Amish/Mennonite workers guarding these animals closely and ensuring that no pictures were taken. A young girl, simply excited about seeing a large tortoise, took a picture of it with her cell phone and was immediately reprimanded by one of the workers in an excessively rude manner.

There were several very large tortoises left as well as many hedgehogs, lizards, mice, guinea pigs, some snakes, and even a skunk. 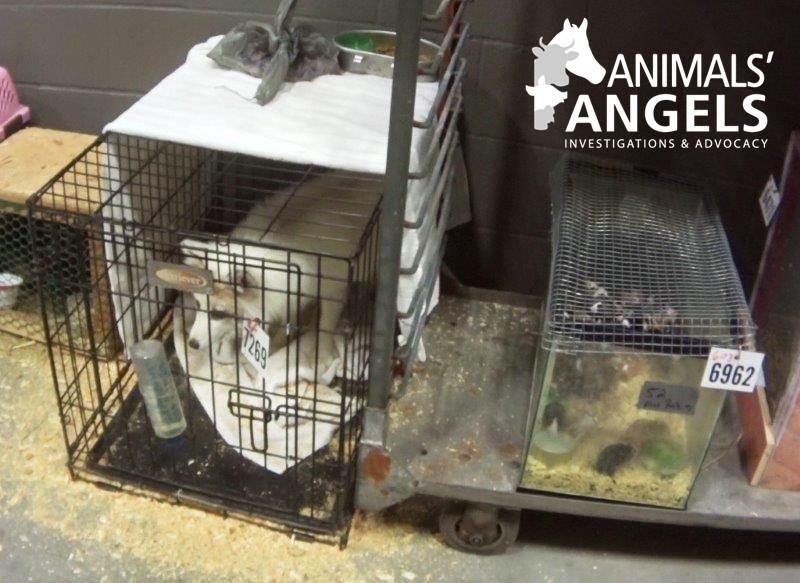 Also present was a gorgeous arctic fox that was extremely scared and constantly tried to hide from the many visitors approaching his confinement to stare at him.

The hedgehogs were kept in small plastic tubs with tiny air holes in the sides, making it questionable if enough airflow was available for them. Several animals were observed with empty water containers.

The bird auction was located in the large hall across from the regular livestock auction area. There were still hundreds of birds left and by now many of them were out of water. 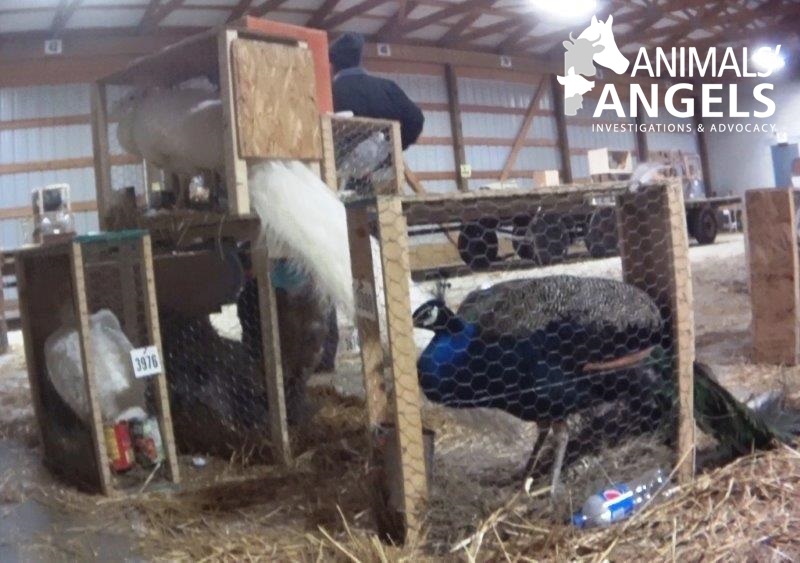 Beautiful peacocks were confined in very narrow cages, their long tails protruding from a small hole in the back; they were unable to turn around or even move.  Several were trying to fight their cage and were clawing with their feet against the wire. Several of the cages were damaged, while others were completely overcrowded with birds.

The chicken cages were in especially bad condition, and cannibalistic behavior was observed among the animals confined. 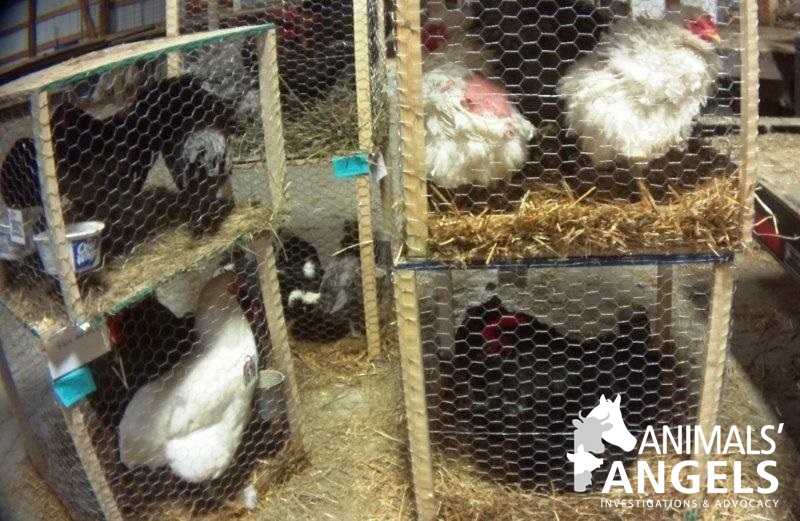 Inside the large animal barn, the sale was ongoing. Prospective buyers were roaming the pen area, openly discussing the value of the animals offered for sale. Many of the attendees were purchasing animals for hunting preserves and zoos or private animal farms catering to tourists.

An African Gazelle had cut one of her ears and was continuously shaking her head presumably due to pain or discomfort. The wildebeests, camels, and zebras attracted a large crowd of spectators trying to pet them. Several of the animals appeared to be quite scared and nervous. 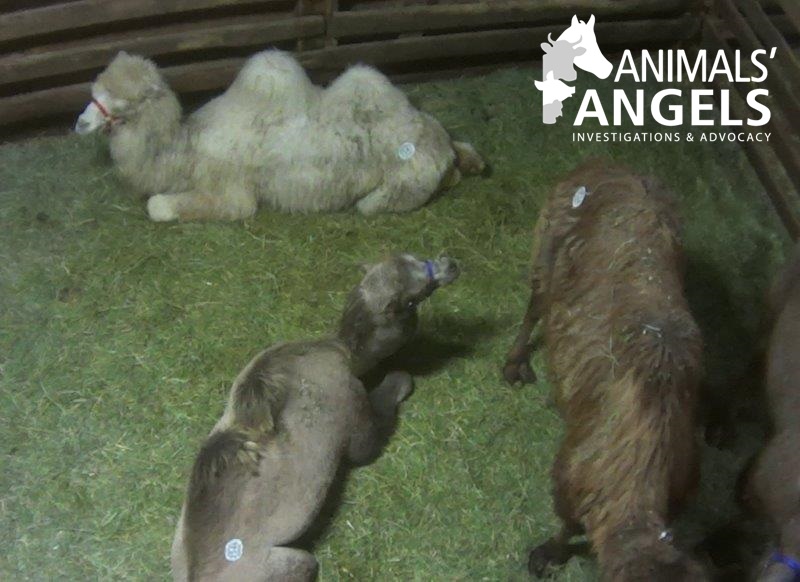 Next door to the large animal barn, the trophy and pelt auction had started. Hundreds of pelts from different animals were piled up on the floor, selling for as cheap as $25.00. The stuffed heads of deer, bighorn sheep, antelopes, and gazelles were hanging from wooden display boards. A full-size black bear, several turkeys, and a bobcat were also for sale.

In the parking lot, investigators noted trucks belonging to commercial operations from all across the country were present. This sale attracts a lot of visitors since exotic auctions are held in just a few states.  Many of the “wild” animals found at these auctions have been raised tame, but are still sold as targets for so-called “canned hunts.” 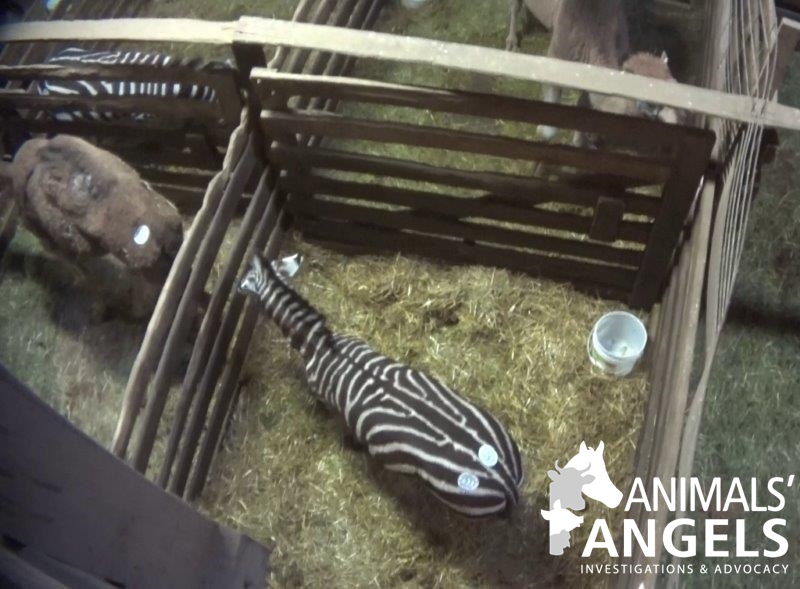 Animals’ Angels hopes to increase awareness about this deplorable practice. We also hope to create change by reaching out to auction management and strongly urging improvements in the handling of the animals as we push for laws to more strictly regulate these sales or, ideally, end these auctions altogether.

To read the detailed compilation report on our past investigations into the Mount Hope Exotic Auction, please go here.