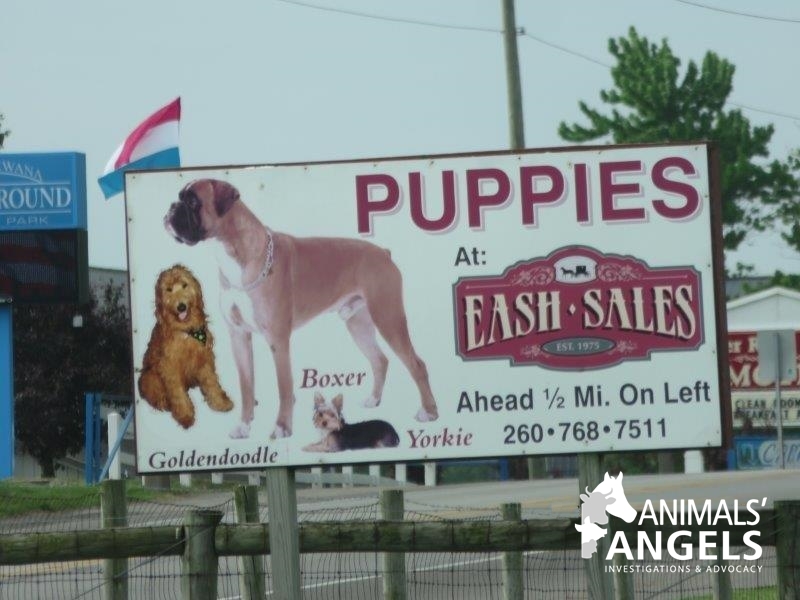 On May 27, 2016, Animals’ Angels investigators documented conditions for the puppies and dogs sold behind the Eash Sales Store in Shipshewana, IN. The puppies are kept in a wooden, shed-like structure at the back of the country store. There is a covered outdoor area with several cages as well as a pen where the puppies can be petted and observed by potential customers. Inside the small building is a front room with cages on both sides, stacked three cages high. The back room of the building boasts another “play pen” for customers to interact with the animals. 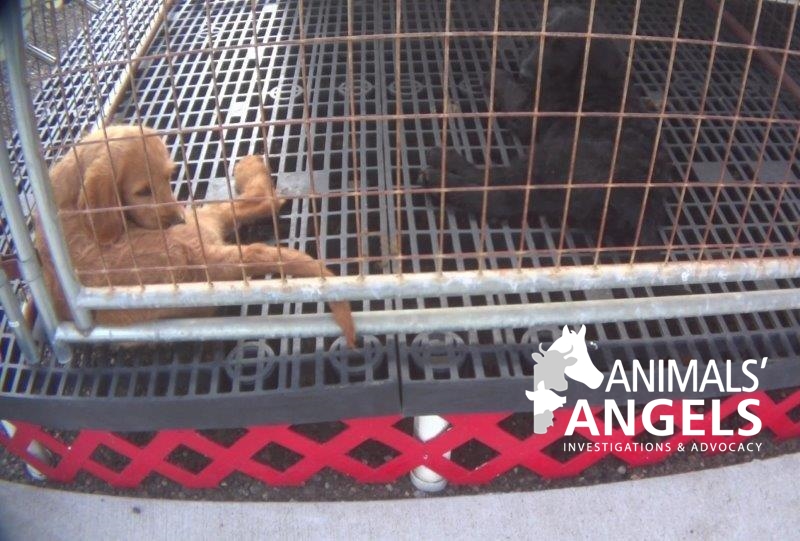 During the time of the visit, all of the outside cages and the outside pen were occupied with dogs. Investigators noted that all of the cages had access to water and shelter. The cage floors consisted of metal slats with holes so that the dog urine and feces could fall through. There were two dogs kept in each cage.

One of the dogs was observed constantly biting her at own side and area below the hip. Three puppies were kept in the “play pen” and were immediately jumping up on the sides of the box when approached.  Unlike the cages, no water was visible in that pen. There was a hand sanitizer dispenser mounted on the wall, but no sign suggested using it prior to touching the animals. Even more concerning is that there was no-one outside monitoring the interaction between people and animals. 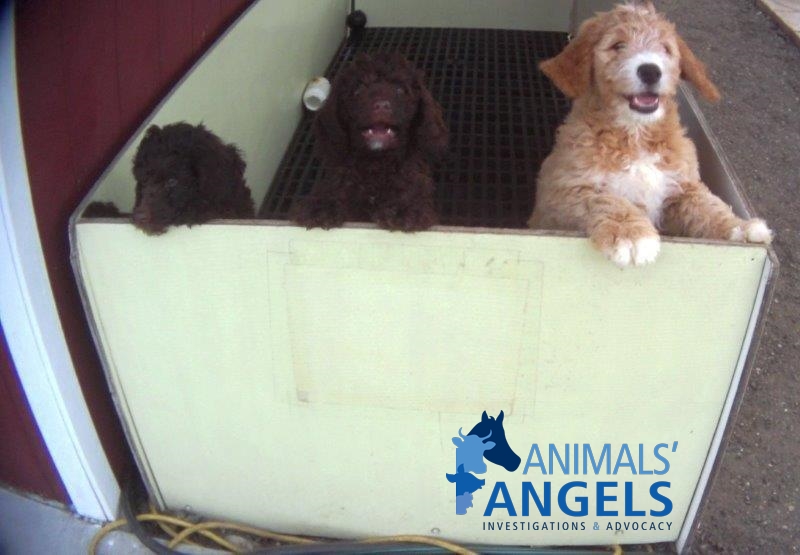 Inside investigators observed three women cleaning the pen area and the floor. Several of the cages on the right side of the structure held “miniature” Boxers and Bulldogs, some of which were sleeping while others were extremely active and crying for attention. The inside play pen held Chihuahua puppies and Porkies, a cross between a Yorkshire Terrier and a Pomeranian. The prices were displayed on the cages and ranged from $750-$1300.

When asking for more information about the dogs, investigators were told by one of the sales-people that some were “likely 9 or 10 weeks old,” up-to-date on shots, but that was all the worker knew about them. 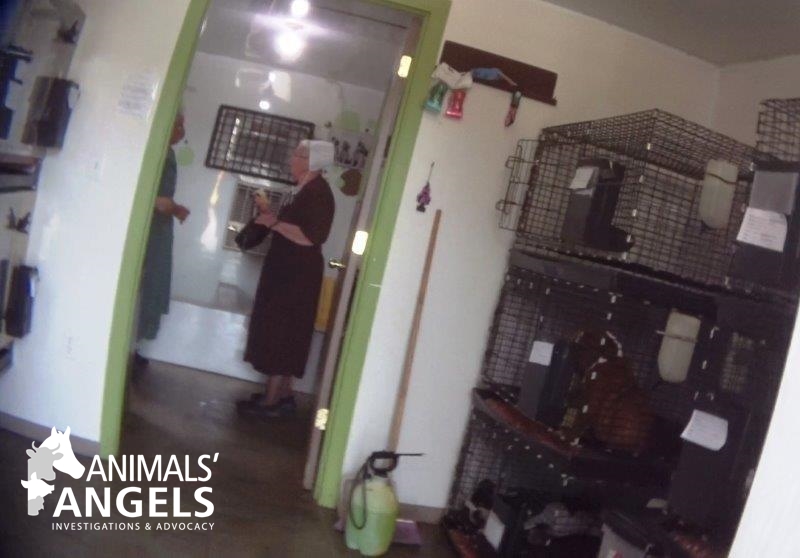 It should be noted that while some dog breeds do allow for a “miniature” standard, often bred by selectively pairing the smallest puppies from separate litters, the Boxer and English Bulldogs are not among them.  In fact, not only does the AKC not recognize a miniature standard in Boxers or Bulldogs, a miniature Boxer is achieved only through breeding with another type of dog altogether, such as a Terrier or a Pug, and although miniature Bulldog puppies can eventually be obtained through systemically breeding the smallest pups of a litter, it is apparently more commonly done through mix-breeding with a Pug and/or French Bulldog.

Another grave worry facing the English Bulldog in general is the toll inbreeding has taken on the breed as a whole. As it stands, these dogs have difficulty even just mating and giving birth without human intervention due to their skeletal issues – not to mention a myriad of other serious health issues. A recently published study addresses these concerns and states: "The English Bulldog truly is a breed in trouble," they report. "Inbreeding ... has brought the breed to a crisis point." 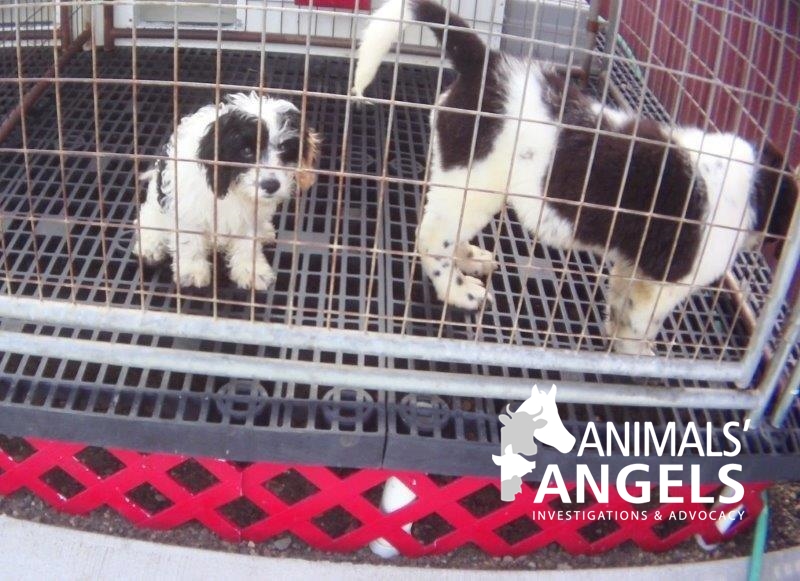 Although the Boxers and Bulldogs are possibly supplied by Eash Sales Store co-owner Jay Eash himself, since he seems to be in the dog breeding business as well as the home décor business, it is completely unknown who delivers the mixed-breed puppies or other dogs such as the Chihuahuas. It’s highly probable that these dogs are provided to this store from one of the 90 commercial kennels in the area. It is deeply concerning that no solid information was available about the puppies being sold and that there was no way to see the parents of the animal or the conditions the puppies were raised in.  It’s quite possible that these dogs are coming from puppy mills and as such, any purchase would support this cruel industry. Also concerning is that should some of the puppies in fact be from Mr. Eash’s own breeding establishment, why are they being sold in this manner? One question that immediately comes to mind is:  Are they so-called “low quality” or “cast off” puppies that cannot be sold through other venues?