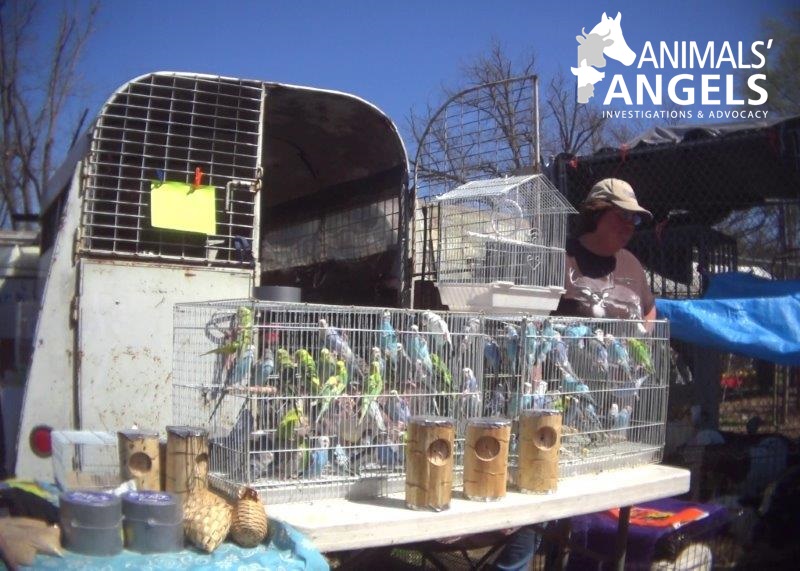 Investigators visited the “First Monday Trade Days,” a flea market held in the city of Canton, Texas.  For four days each month large sections of Canton are transformed into a huge flea market with thousands of vendors. According to the event’s website, this has been an ongoing occasion in some form or another for the past 160 years.

Animals sold at the flea market are peddled in the so-called “Dog Alley,” which is an area located on the Southeast corner of Highways 19 and 64, on the grounds of the Curry Trade Grounds and RV Park. Dog Alley made the news back in 2014 after the release of an HSUS undercover investigation which found countless puppies kept in dreadful conditions and suffering in the summer heat with no water.

Animals’ Angels visited the flea market recently to determine if conditions had improved since that investigation took place. 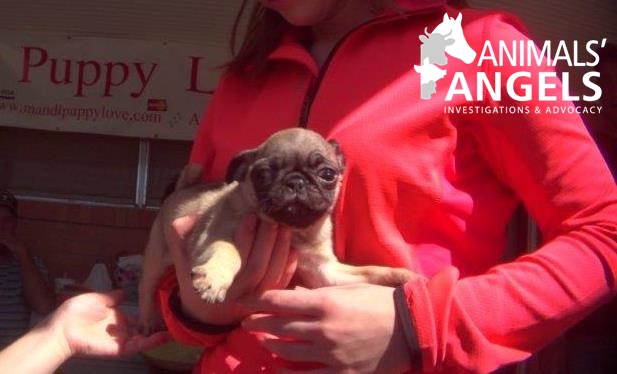 When AA investigators entered the area, they immediately noticed that there were a variety of different types of animal vendors. Some of them had their own, permanent shed type buildings from which to sell puppies, while others had merely set up make-shift marketplaces along one of the countless alleys with their cages full of dogs, all vying for the attention of the market visitors. Some vendors it seemed brought their own crates and cages while others used the cages that were provided on a rental basis by the Trade Grounds. The cages provided by the Trade Grounds were built in with concrete flooring, the type you would see used in some outdoor kennels.

Hundreds of puppies were being offered for sale with every breed imaginable being represented in Dog Alley. The conditions for the puppies varied greatly.  Certain vendors’ cages were very clean with blankets, toys, and water readily available for the dogs, while other suppliers kept dogs inside bare cages with elevated wire floors or were leaving the dogs on the bare, rough concrete floor inside the rented cage space. Several cages had no water available despite the fact that the front of the confinement area was positioned in full sun and the dogs inside were panting heavily.

Several of the dogs observed appeared lethargic and some had obvious eye infections, while others were sneezing non-stop. 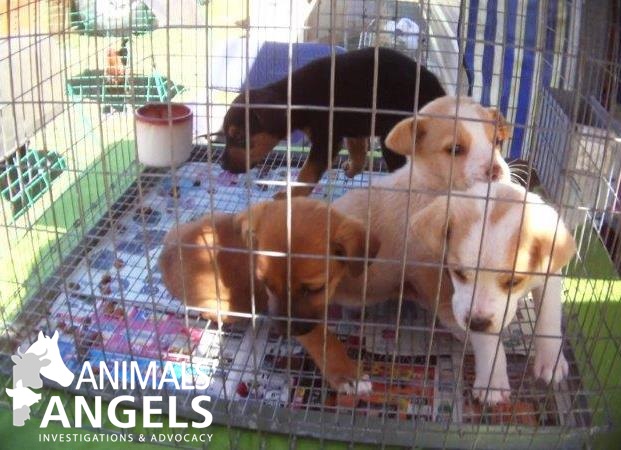 Investigators noted that multiple dealers had posted signs stating “don’t let the puppies lick your fingers,” and were providing hand sanitizer to potential buyers. Upon striking up conversations with several different sellers and visitors, investigators were advised that the Trade Grounds were known to be infected with Parvo, a highly contagious viral illness.  The virus manifests itself in two different forms. The more common form is intestinal, which is characterized by vomiting, diarrhea, weight loss, and lack of appetite. The less common form is the cardiac form, which attacks the heart muscles of very young puppies, often leading to death.

The virus can easily be transmitted by just touching an infected dog and then touching another dog, as well as by simply walking over contaminated soil or infected feces.

While providing hand sanitizer is a good start it is certainly not an effective way to stop the spread of the virus since many vendors only recommended using it and did not make it mandatory before touching their dogs.  In addition, the dogs kept in the cages rented out by the Trade Grounds are at an even higher risk since the concrete of the confinement area and surrounding soil might have been exposed to the virus.

Investigators questioned several of the vendors regarding the required veterinary inspections as well as the protocols to be followed when selling a dog at the Trade Grounds and were told that there were not many – the only requirement was that the dog had to be 8 weeks old. 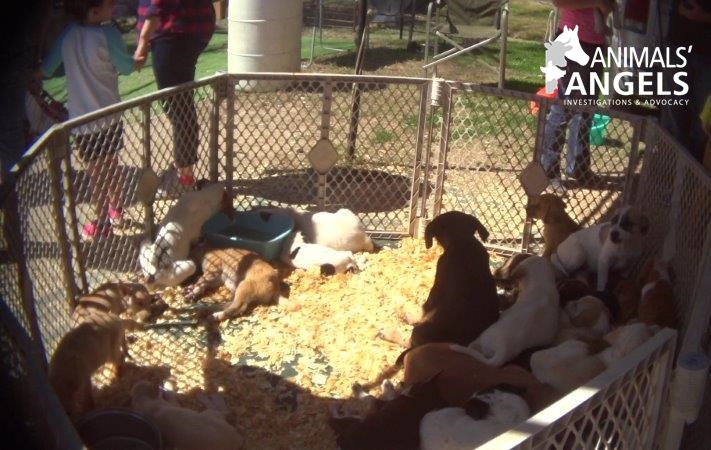 The cost to the vendor to rent a space is $40 which covers the full 4 days of the flea market. There is no veterinary inspection of the dogs prior to selling them.  Also, the Trade Grounds do not require the vendors to cover the cages, concrete flooring, or soil, or to provide and insist upon sanitizer use to prevent the spread of Parvo or any other illness.  It is up to the vendor to follow common sense safety protocols or not. And as observed by our investigators, most chose not to take the minimal safety measures that would greatly benefit the animals in their care, other than setting out hand sanitizer for voluntary use.

While inspecting the entire market site, investigators noted that the vendor alleyways closer to the entrance seemed to house the more established dealers selling the higher priced dogs, while the alleys in the back of the premises were home to vendors selling puppies as cheap as $30.00 each. 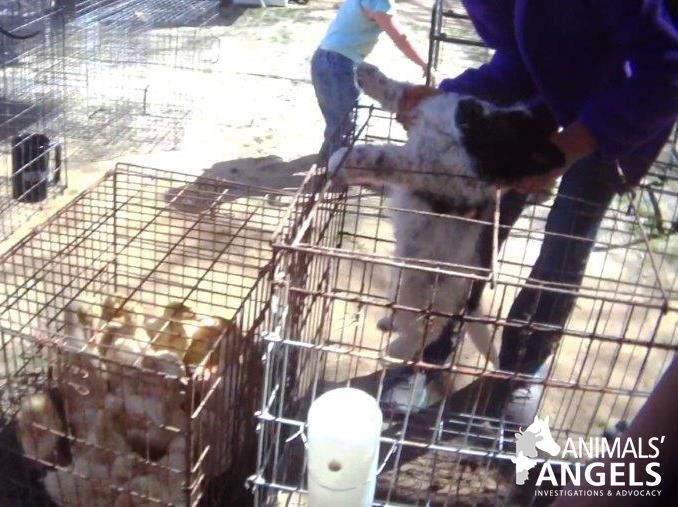 Two vendors in particular at the back of the grounds caught our investigators’ attention: one had set up an open playpen with approximately 25 puppies of differing breeds.  Most of the pen was exposed to the full sun and the puppies inside kept desperately climbing over and on top of each other to get to the shaded area.  There was no hand sanitizer provided by this seller and the dogs themselves were lying directly on the ground which had been covered with minimal wood shavings.  Each puppy, regardless of breed, was for sale at $50.00. No information whatsoever regarding a vaccine history or veterinary records was available or provided. 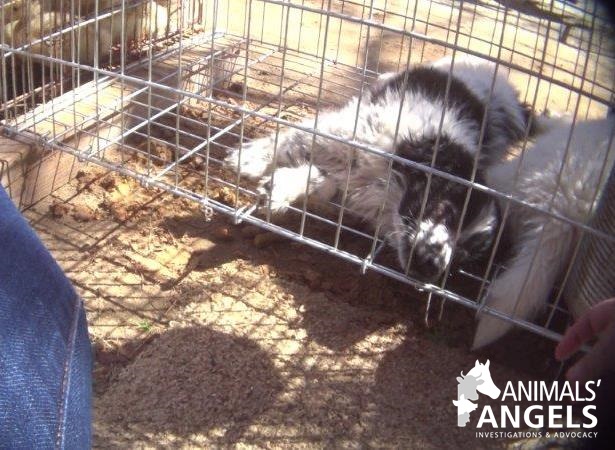 The second vendor who prompted a more detailed inspection from our investigators kept three puppies in a home-made, rusty wire cage with holes that were way too big for the puppies’ feet.  It was impossible for the dogs to stand or move in the cage without falling through the bottom grate – all they could do was to lay flat on their sides.  This seller had cut a makeshift hole in the top of the cage through which the puppies were taken in and out.  Each time a puppy was removed and returned, they had to bypass the sharp, jagged cut-off ends of the steel cage wires, which put them at great risk of being injured.  These puppies were also being sold for $50.00 each.

As disturbing as the poor conditions are for the puppies and dogs sold at the Canton “Trade Days,” the circumstances under which the other small animals are sold at this flea market are equally concerning. 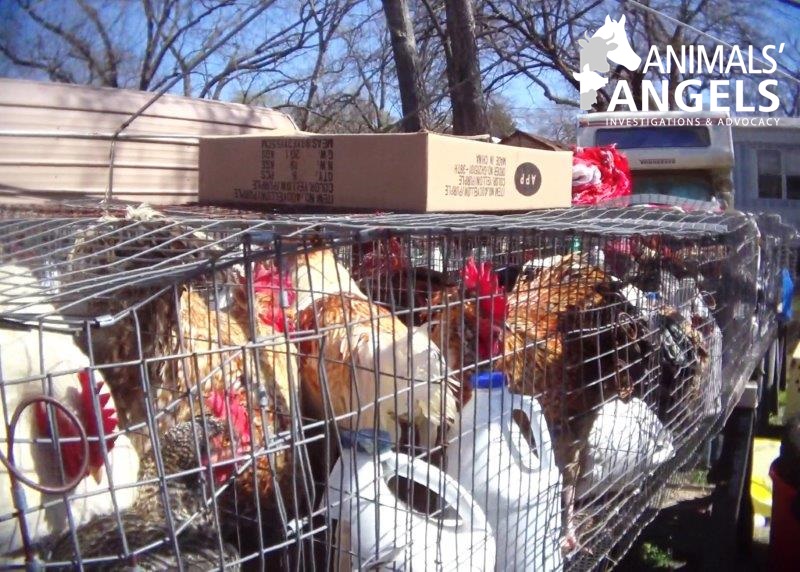 Thousands of chickens were for sale, set up for display by being stuffed into overcrowded, rusty, and damaged cages. One chicken was observed eating another chicken, pecking bloody pieces out of its back. The cage was so full that the unfortunate victim had no chance of getting away. Experts have noted that this type of behavior is brought on by overcrowding, caging birds of different ages and breeds together and/or putting injured birds in with others, as well as overheating, excessive light, and lack of proper feed.

Some of the largest poultry vendors were no strangers to AA: Tina Peck and Jimmy Fowler, known slaughter horse dealers from Mabank, Texas, deliver thousands of chickens to the Canton flea market on an apparently regularly basis. 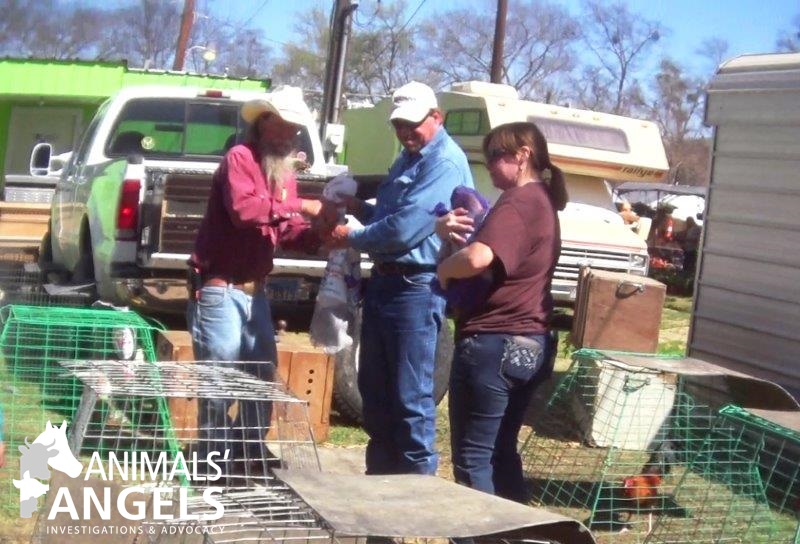 The turkeys, ducks, and chickens that were sold were removed roughly from their cages by just their wing or one of their legs and carried away in old feed bags.

Rabbits were displayed for sale in bare wire cages with no resting place available for them, forcing their sensitive paws to sit splayed on the metal wire of the cage floor. Several horses, ponies, and minis sold for next to nothing.

Animals’ Angels has been concerned about the deplorable conditions and appalling lack of oversight at this flea market for quite some time.

Of particular note to our investigators was a comment made by Morgan Elliott, the attorney on record for the Curry Trade Grounds.  During the 2014 media attention of the HSUS story, Elliott provided the following counter-statement in response to HSUS’ investigative report:

“Curry Trade Grounds does not condone any form of animal cruelty or neglect. In addition to enforcing the rules of our state and local governments, Curry Trade Grounds has implemented its' own rules and regulations as an attempt to manage the safety and welfare of animals while they are located on our property. With the help of our staff, Canton Animal Control and the Texas Animal Health Commission, we make every effort to ensure that our vendors follow these rules and regulations.”

While this remark may have been accepted at face value by most, Animals’ Angels felt it was imperative to research the veracity of this statement since it clearly asserts that not only are specific protocols in place and followed at the Trade Grounds for and during the animal sales, but that compliance of such protocols is actually supervised by outside enforcement agencies. To that end, we requested documentation from the Canton Animal Control as well as the Texas Animal Health Commission regarding their inspections at the Trade Grounds.

Sadly, the results were not surprising.  The Texas Animal Health Commission responded they would not even get involved in animal welfare matters, but rather their inspectors merely review what little vendor paperwork is required for any problems, and ensure that the vendors have Scrapie tags, permits and Coggins test results. 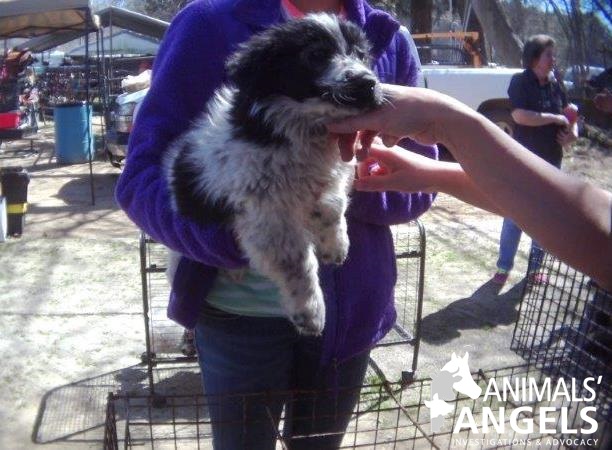 As for any oversight from the Canton Animal Control, their records also did not show any welfare inspections whatsoever. In fact, according to the documents provided, Canton Animal Control was on site at the Trade Grounds exactly 13 times between January 2014 and February 2016, mainly to impound abandoned or dumped dogs.

As we suspected, enforcement of the ongoing animal welfare issues at this location seems to be nonexistent.  Whatever procedures the Trade Grounds may have in place to ensure the safety of the animals being sold at the flea market, which is questionable at best, is in fact a moot point without enforcement.

Animals’ Angels will continue to monitor this location. In addition, we must demand that enforcement agencies step up and do their jobs to ensure the welfare of the animals being sold through this flea market.  Mindful of the need for stronger, long-term solutions, Animals’ Angels will also push for laws to prohibit the sale of animals at unregulated, open air venues such as the so-called Dog Alley located at the Curry Trade Grounds and RV Park.