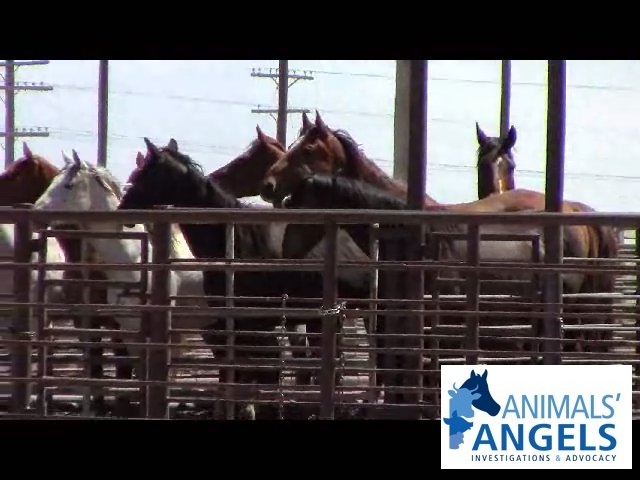 Investigators arrived at the auction at 10:15 a.m.  The parking lot was filled with many stock trailers and a good number of people were moving around the lot and in the pen area.   Known kill buyer Charles Carter’s semi truck with a flat floor trailer was the only kill truck noted.  One stock trailer had Oklahoma plates but it was only a four-horse trailer, so it most likely did not belong to a large scale buyer.

There were auction workers riding horses around the pen area which made it difficult for people to look around in the pens.  Investigators noted that there were several pens on the west side of the auction that had about 30 horses that were not tagged for the sale. 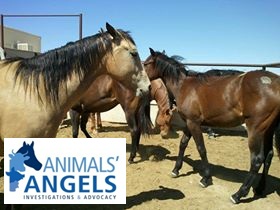 Investigators checked on the horses that were awaiting the ride through sale.  One horse had a small cut on the forehead that was fresh and looked to be a trailer accident.   All the other horses were in excellent condition, all were in good weight, shiny coats, and no long hooves or leg injuries.

At 10:30 a.m. investigators noticed that Charles Carter’s truck had started and was moving to the east side of the auction to the loading chute area.

In the pens were about 20 horses all of which seemed less than 3 years year old.  One pen had six minis, two horses and four burros.  There nine ponies and four mules.

When investigators checked the loose sale pens, it was noted that approximately 22 horses had been sold.  Four were a little thin but were not extreme.  There were no injuries observed and the pens were very quiet; no aggressive animals were seen.

At 10:40 a.m. while inspecting the kill pens, our investigators observed a group of about 14 horses being moved from the pens located to the west.  These were the horses that were not tagged for the sale that our investigators had observed previously.  Carter’s truck had already backed to the chute and the horses were then moved to the holding pen prior to loading.  Carter’s driver appeared to be babysitting Carter’s young daughter, allowing the child in the pen area with a whip.  This activity naturally agitated the horses.  Carter then moved his pickup and stock trailer to the chute.  There was already a small horse in the stock trailer.  Both Carter and his wife were observed with whips, hitting the horses for no apparent reason.  The horses remained in the pens and were not loaded at this time. 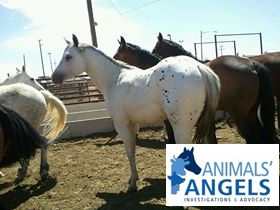 At 10:50 a.m. the horses from the kill pens were moved to the loading area and added to the others which created utter chaos.  One appy stallion was chasing and mounting a black mare numerous times, he was very aggressive with the other horses and controlling of the mare.  While the horses were held in this area they got progressively more agitated. Neither Carter nor anyone else tried to separate this stallion from the others.

At 11:10 a.m. the loading started.  The horses were hit in the heads and bodies forcefully with the whips.   The loading took about 15 minutes. The stallion and the mare were both loaded into the center compartment which is a clear violation of the Commercial Transport of Equines to Slaughter Regulations and a danger to all of the horses on the trailer.

The truck then left the auction property and headed west which was not expected as it isn’t a usual route.  Investigators decided to follow the truck.  It headed south on US 350 to US 109, continued south to US 160 and headed east and at this point investigators knew that the truck was headed to US 287 which is the route taken to Beltex Feedlot in Morton TX.

Since this truck had at least 37 horses it was assumed that the truck was overweight and the driver chose this route to avoid going over the Port Of Entry in Lamar, Colorado.

When investigators returned to the auction, the tack sale was still in progress.  No other large kill buyers appeared to be attending which was odd as several are routinely in attendance.

The ride through sale started at 12:41 p.m.   As the horses left the sale ring, they were hit and kicked by the gate operators before being penned.  Several of the horses spent a good amount of time in the sale ring.  One three year old horse was in the ring for longer than 10 minutes and sold for $425.  Most horses sold for between $20 and $1200.

At 2:25 p.m., the remaining loose horses were brought in for sale.  They were in sold approximately eight minutes. The sale concluded at 2:33 p.m.

At 2:50 p.m. investigators saw the kill pen horses being moved to the east pen area.  Investigators noted that the remaining untagged horses had been moved to the kill pen as well.  When asked why the horses had been moved to this area, an auction worker explained that these particular horses would not be moved out until the next morning, therefore they needed to have feed and water available.  When asked who owned the animals our investigators were told that Carter was the person to speak to about it.

Investigators waited to see if any horses would be loaded onto Carter’s stock trailer, but he had left the auction without loading.   There was no other activity.