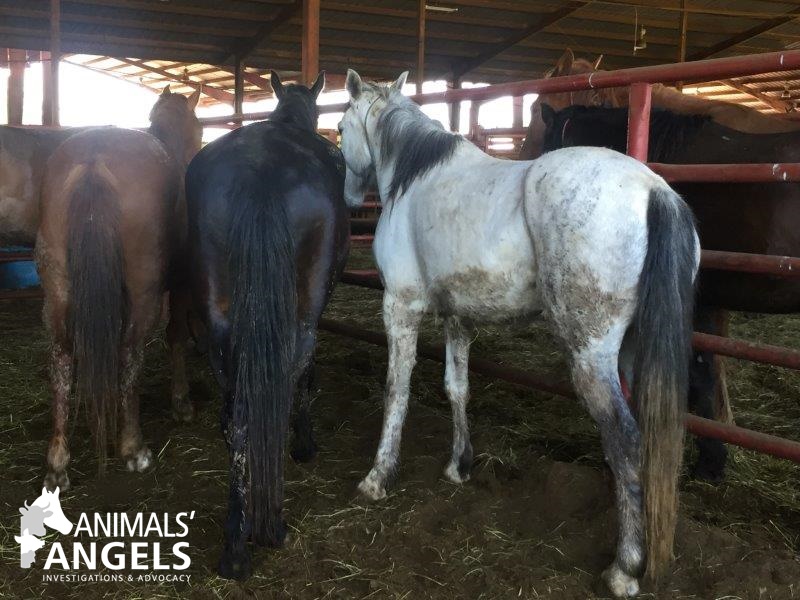 Animals’ Angels attended the Wild Horse and Burro adoption event held at the Knoxville Livestock Auction in April 2016.  At the event, which had been well advertised on the BLM website for quite some time, wild horses and burros captured in Nevada, Wyoming and California were available for adoption for a $125 flat fee. The animals could be bought via internet or right there at the auction. Among the animals sold were several sale authority horses as well as horses participating in the Extreme Mustang Makeover Initiative. 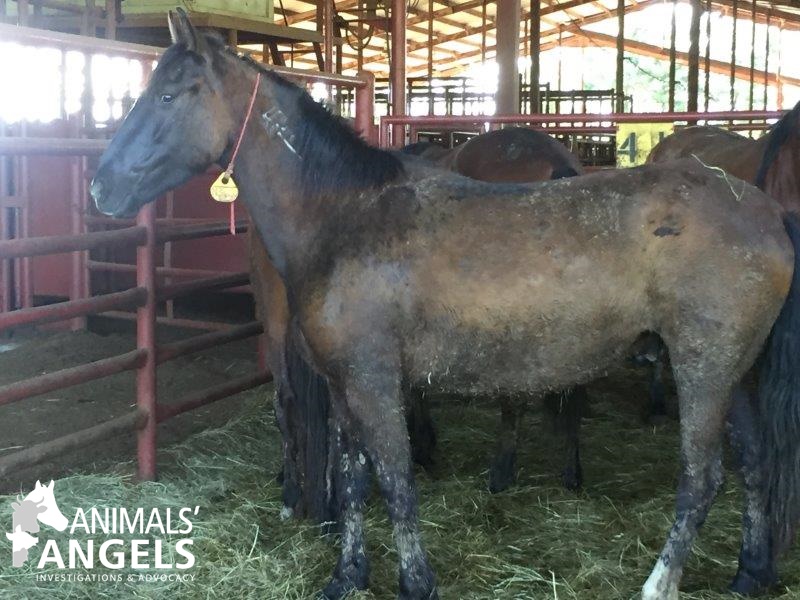 Investigators arrived at the auction premises on 4/29/16 at 8:50 a.m.  Investigators observed three Ford pickup trucks with government plates and stock trailers parked next to the auction building, likely for the BLM handlers and their horses. However, all animals that were for sale had been brought in together in large single deck trailers by JST Transportation LLC, a transport company from Halls, TN (DOT #1273213). According to public documents, the animals were picked up at the BLM facility in Ewings, IL on 4/27/16 and delivered to Knoxville on 4/28/16 for $1,780.20. 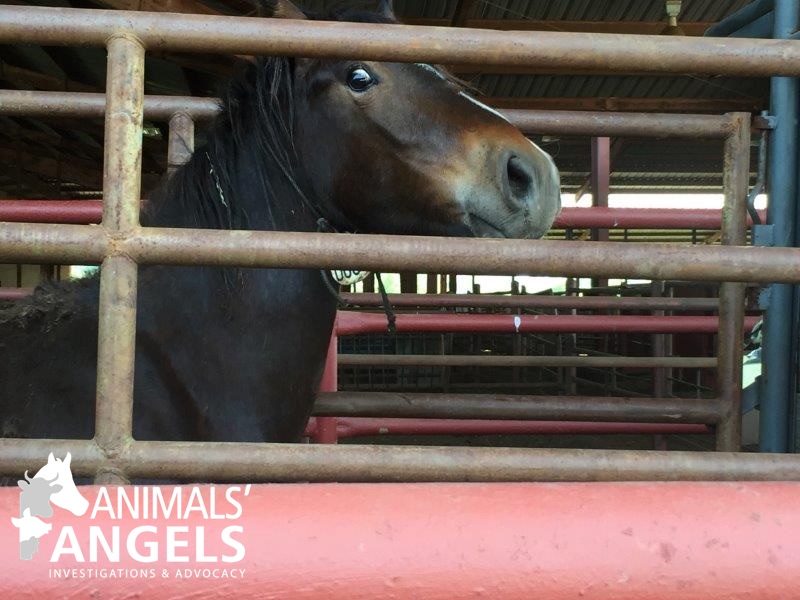 When investigators arrived, they quickly assessed the condition of the pens.  There were 1 to 5 horses and burros to each pen and all of the pens had access to water. Some hay had been scattered across the ground in the pens as well. A paper sign with information about each horse and burro was posted on each pen, containing the age and sex as well as capture location of the animals.

All of the animals were in good condition with the exception of one mustang that had some fresh cuts on his face, likely obtained during transport. The event was very well attended and buyers from Alabama, New Jersey, Pennsylvania, North Carolina, South Carolina, and West Virginia were present. All of the buyers had to fill out the BLM application for adoption and provide information about shelter, location, and care they would be able to provide for the animal. 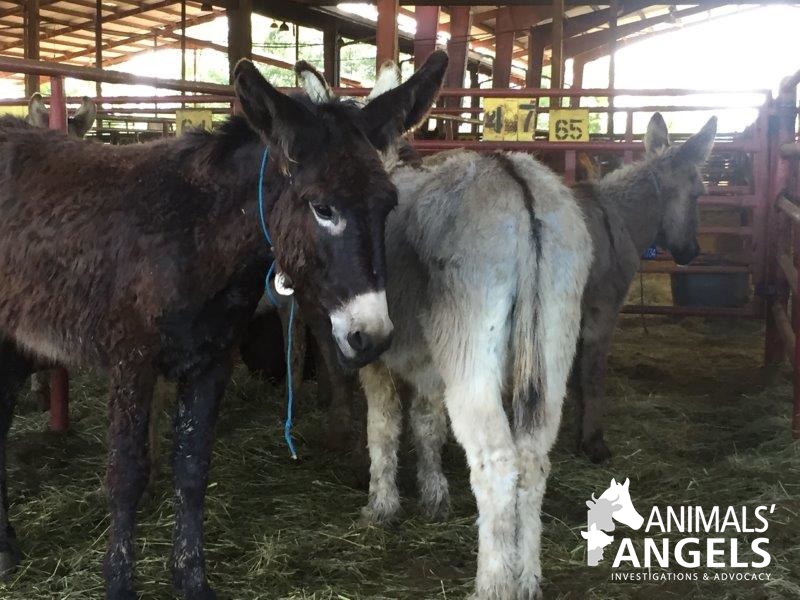 Sold horses were moved to the loading area by the handlers on horseback. Investigators noted that the loading chute had been covered up with tarps and wood. Several of the animals entering the chute were quite frightened and panicked when the gates closed around them. Some tried to rear up and escape the chute, but were unsuccessful.

All handling observed was calm and patient, and the handlers took a long time trying to put halters on the horses and moving the horses to the chute.

When investigators returned to the sale the next day, there were still a great number of horses and almost all of the burros left. By now, several of the water troughs were empty and the horses were trying to lick the remaining drops out of the troughs. During the several hours of observation, the troughs were never refilled by anyone from BLM. 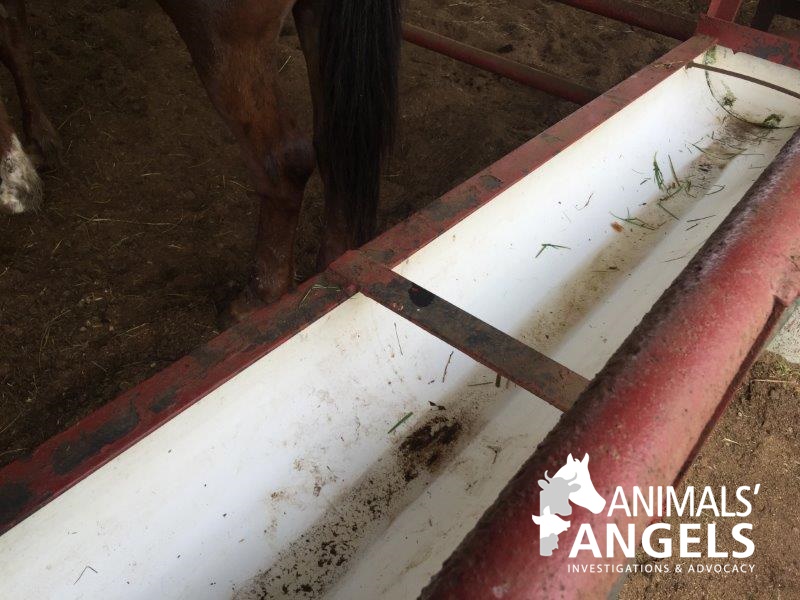 At the end of the event, which occurred on 4/30/16 at 5:00 p.m., there remained approximately 30 horses and burros unsold. These animals were subsequently transported back to the Ewings Holding Facility the next day by JST Transportation LLC.

Our investigation revealed several areas of concern: Why did the BLM choose to hold an adoption event at a known slaughter sale where it has been documented time and again that hundreds of horses each month are sold to large scale kill buyers like Mike McBarron, the Stanley Brothers, Brian Moore, Terry Blair, and Bruce Rotz?  Shouldn’t the BLM have chosen an auction barn or location with no ties whatsoever to the slaughter horse industry? 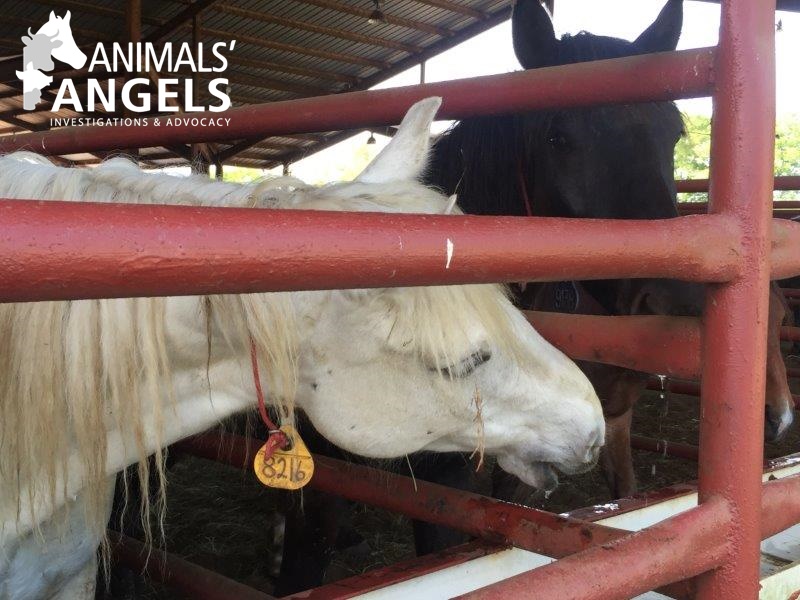 Additionally, several complaints regarding the treatment of horses at this auction have been filed with the Knoxville Police Department, showing that horses in severe distress were kept by the auction for an extended period of time without providing any veterinary care. Should the BLM have shown concern about the wild horses and burros being held and sold through an auction barn who has had such complaints made against it?

Besides these ethical issues, it is also a fact that many horses going through the Knoxville sale are suffering from Strangles, a highly contagious disease. It is a valid concern that these wild horses and burros were held in the same pens as infected horses and drinking out of the same water troughs for several days. 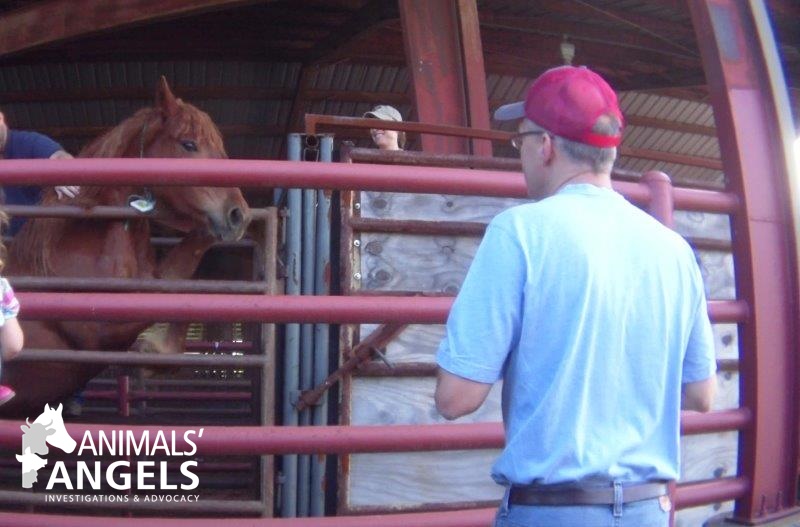 According to public records, a BLM representative simply reached out to various auction facilities by phone to inquire which auction would be interested in holding such an event. Once Knoxville indicated interest, a lease agreement was signed and payment of $1,287.50 was transferred by BLM representative Scarlett Frost. According to the paperwork received, absolutely no additional research regarding the facility was conducted.

Animals’ Angels would recommend to the BLM that they use better judgement next time when selecting a facility for these kind of events.