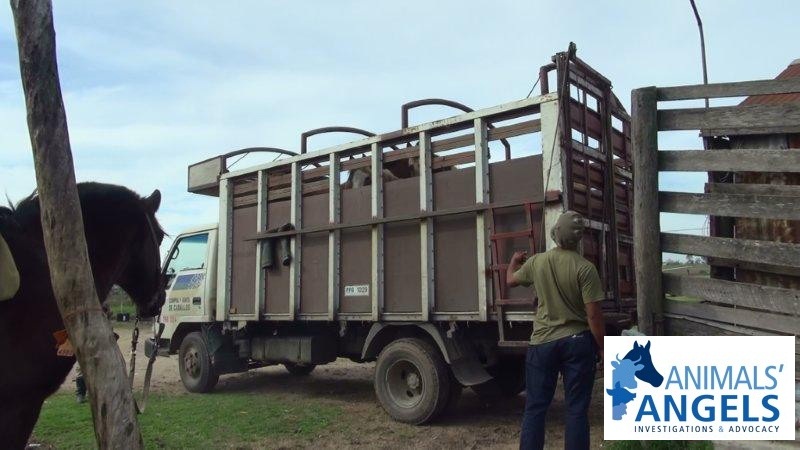 Uruguay has a horse population of approx. 400’000 horses. More than 40’000 horses are slaughtered every year. Uruguay is one of the leading exporters of horse meat. It is the fifth-largest supplier of horse meat to the EU. In 2012, Uruguay exported more than 7’000 tons of horse meat, mainly to Europe and Asia. In the last 10 years, the value of the exported horse meat has increased from 8 Mio USD to 30 Mio USD.

In Uruguay, horses are not commercially bred for meat production; the slaughtered animals are former working, sports and riding horses.

In Uruguay, there are no laws that offer protection for animals during transport. In general, transport distances are much shorter than in other countries, with average distances of less than 400 miles. However, according to Uruguayan statistics, two of the three horse slaughterhouses also import live horses from Brazil.

traveled to Uruguay to find out more about the conditions and treatment of slaughter horses. Their first stop was the Clay slaughter plant. Adjacent to the plant was a large, open pen area visible which held approx. 100 horses and several foals. The majority of horses were in good condition, however, one severely emaciated mare and one pregnant mare were observed. There was only very limited shelter available for the horses.

A truck & open roof trailer loaded with horses was backed up to unload. The handling was quiet and slow

, no hitting was observed. The workers used blue flags to move the horses.  The truck came from Tranqueras, Rivera, which is approx. 300 miles from the Clay plant. 2 guys on horseback and a dog were busy gathering horses from the surrounding paddocks and moving them closer to the plant. The dog was observed biting the hind legs of the horses.  No sick or injured horses were observed.

The veterinarian of the plant, Dr. Guilermo Caruso, offered to give investigators

a tour of the plant. However, no horses were slaughtered during the time of their visit, which is likely why the tour was offered. The plant appeared very modern and clean.  All holding pens had non-slip flooring. A concrete walkway leads up to the kill box. 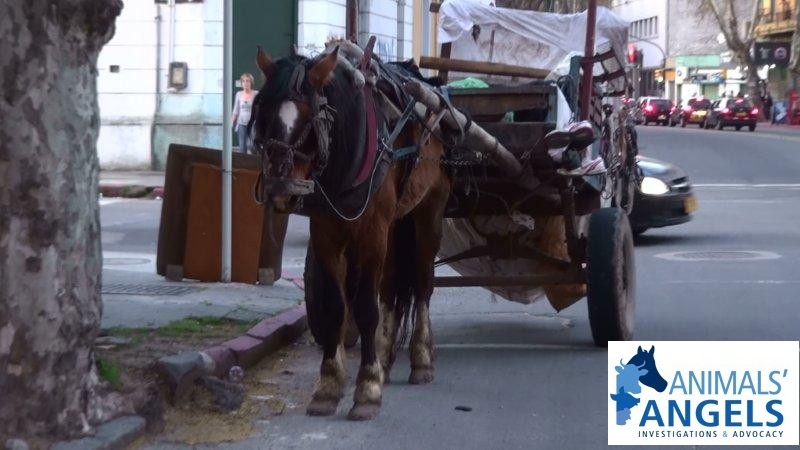 The veterinarian stated that they would have a strict animal welfare protocol that all employees had to follow. No sticks or electric prods would be allowed.  Horses would travel a maximum of 8-10 hours and would be slaughtered within 2-3 hours after arrival at the plant.  Whenever they would be forced to stay longer, they would be given food and water.

that he designed a new system to get horses into the kill box, which includes restraints for body and neck. He stated that a compressed air nail gun is used for stunning and claimed that they would have a 98-99% success rate. They perform regular, random checks for prohibited substances in the meat.  The samples are sent to independent laboratories.  He claimed that government controls were very strict in Uruguay.  He informed investigators

that they were audited 3 months ago by a Swiss company.

Investigators then met with kill buyer Ruben Fabian Bardanca near Rivera.  He was very forthcoming with information and stated that he was the biggest dealer in Uruguay, controlling 70% of the market

. He admitted to shipping approx. 700 horses/month to the Clay slaughter plant. However, he did not volunteer to show investigators his collecting station.

The investigators then went to a pharmacy and covertly filmed the purchase of phenylbutazone. They bought Fenbuzol Oral and other drugs without a prescription and without any questions asked.  In the EU, phenylbutazone is available only with a prescription and has to be administered by a veterinarian. Treatment with phenylbutazone must be recorded in the “horse passport”, resulting in the definitive exclusion of the horses from slaughter for human consumption.