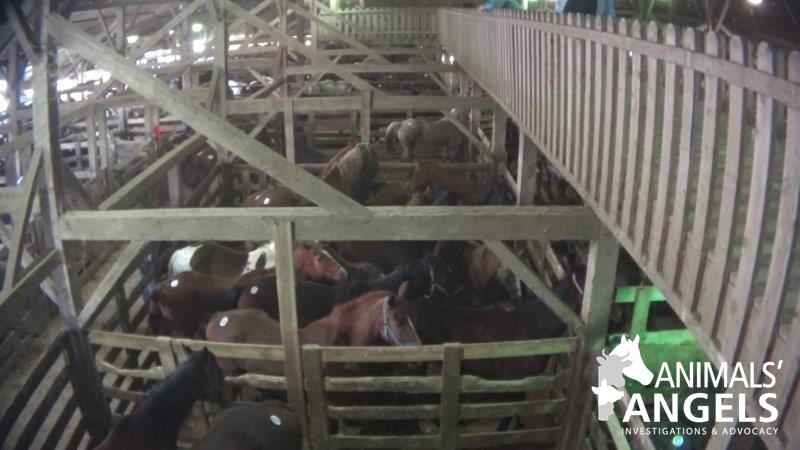 Investigators returned to the weekly horse sale operated by one of Ohio’s largest kill buyers, Leroy Baker, on April 1, 2016. Baker has been in the slaughter horse business for a very long time and has violated the Commercial Transport of Equines to Slaughter regulations and other animal protection laws countless times.

In 2008 Baker was ordered by USDA Administrative Law Judge Jill Clifton to pay a fine of $162,800.00 for multiple shipments of blind and/or severely injured horses. Among those animals, several were unable to bear weight on all for legs and went down in the trailer during the transport. Several horses had to be euthanized immediately upon arrival at the plant or arrived already dead. 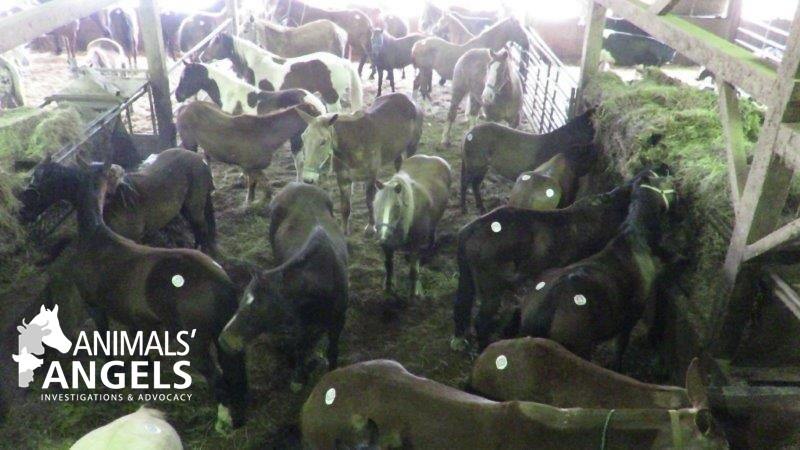 Disappointingly, but perhaps not surprisingly, Baker has managed to avoid payment of the aforementioned fine, and to this day he remains unpunished for all of the atrocities he has committed.

Baker is currently still shipping approximately 3 loads of horses a week to the Viande Richelieu plant in Quebec, Canada.

Investigators arrived at the auction at 12:15 pm. There were approximately 125 horses inside the pen area as well as a few mules and minis. 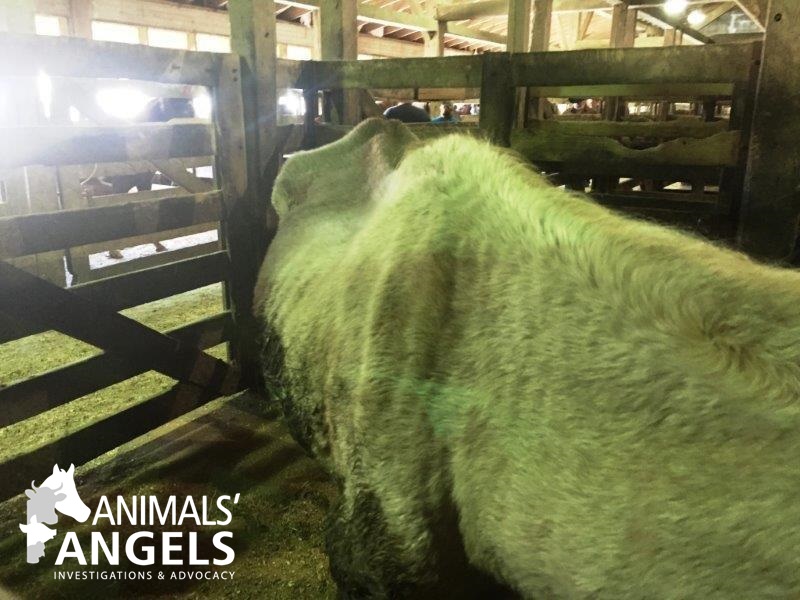 All the way in the back of the barn was a pen with a few of Baker’s own horses already tagged for slaughter.  In addition to the horses, there were two pens with cows. It was noted that workers had put two horses in one of the pens with the cows for no obvious reason.

Walking through the pen area investigators noted a severely emaciated horse in a pen by himself. This horse wore Auction Tag #902, and was easily a BCS of 1. The horse had severe diarrhea and the lower portion of his body was covered in mud as if he had pen laying in deep mud for quite some time. AA investigators provided the horse with some hay, which he attacked vigorously. 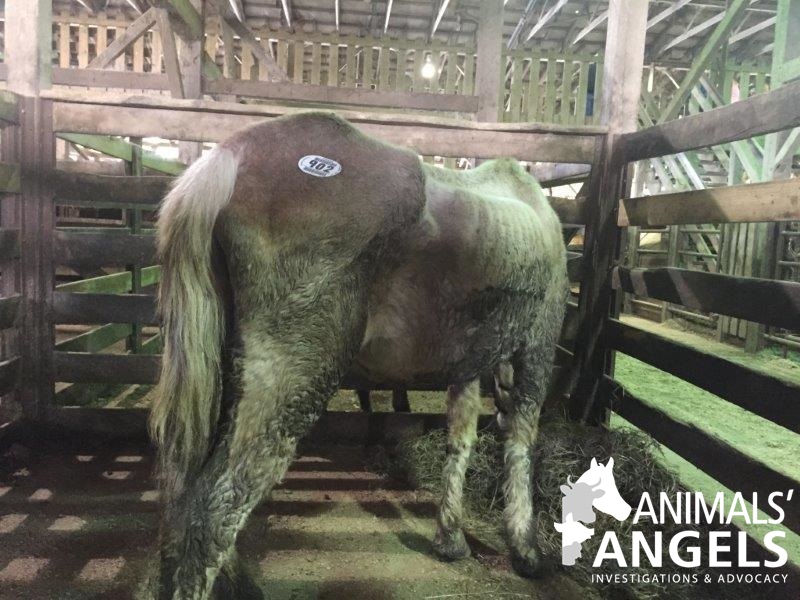 Besides this unfortunate animal, there were several other very thin horses. One Standardbred gelding had an open wound on his knee and another had a severely splintered hoof.

The auction started at 2:00 pm. Kill buyers Bauer and Baker were doing most of the bidding during the sale. Horse trader Fisher from PA also purchased several horses. Prices ranged from $80 to $700, depending on the weight and condition of the horse.  The emaciated gelding was purchased by a private individual for $20.00. 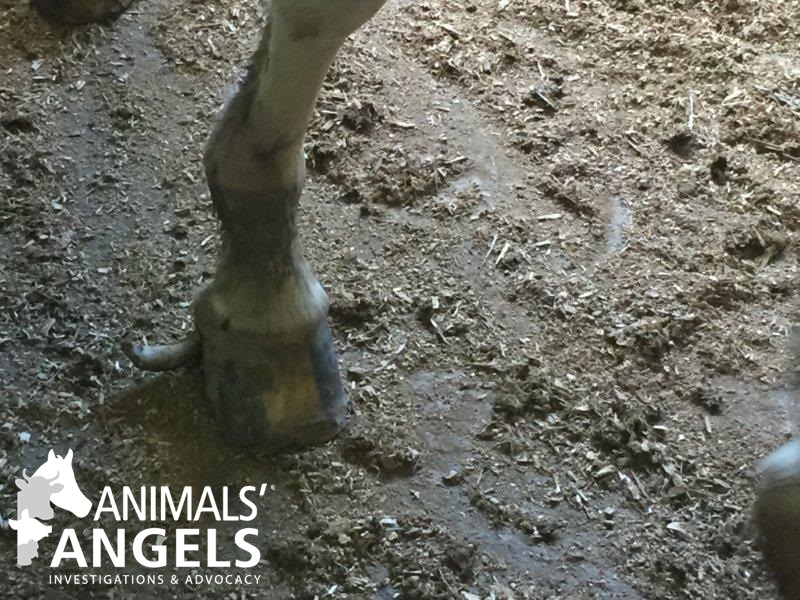 The auction went at an extremely fast pace and was over in just 50 minutes. Investigators observed Bauer’s white semi and single deck trailer parked in front of the barn ready to load.

The handling of the horses by auction workers remains a grave concern.  Once again investigators observed that too many horses were being moved to the auction ring at the same time, resulting in one horse going down and many others becoming extremely agitated. The worker at the ring entrance used his stick excessively to force the horses forward.

Additionally, the kill pens were packed too tightly before the horses were moved to the larger pens, resulting in unnecessary kicking, fighting, and biting. 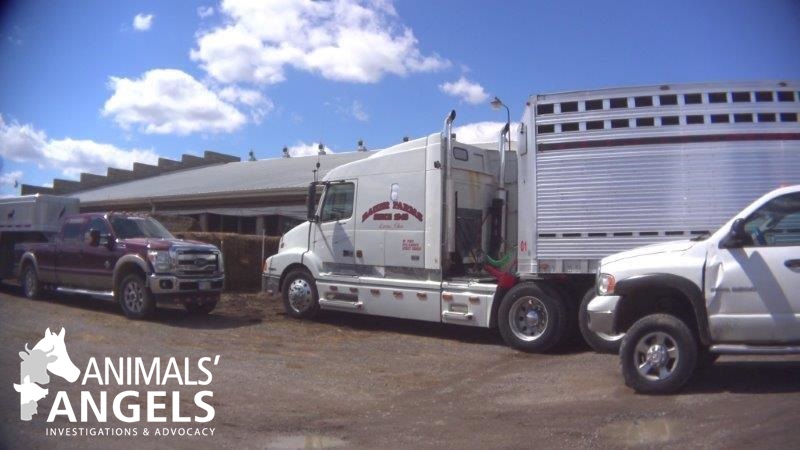 Animals’ Angels will continue to monitor the situation and report all violations to the appropriate enforcement agencies and authorities.