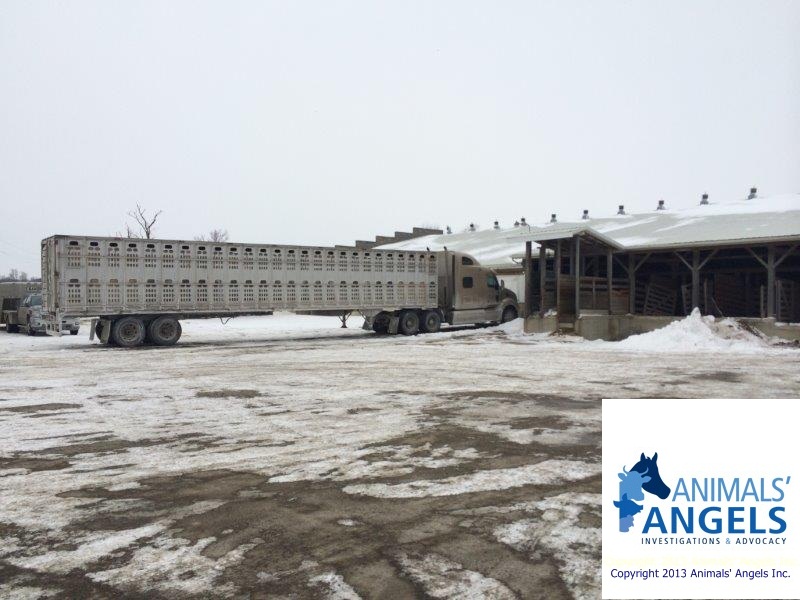 On January 31, 2014, investigators arrived to the Sugarcreek Auction shortly after 12:00pm greeted by temperatures in the low 30s and a lightly falling snow. Upon their arrival the investigators first noticed that Sugarcreek Livestock’s gold-colored semi and a boarded up single deck were packed next to the loading ramp.

Three ponies were held in a pen situated close to the auction ring. The two larger ponies kept biting and kicking the smallest one. One kick this pony suffered was so severe that the impact jarred the pen gate open. While it was more than obvious that the three should have been separated for their own safety, no one at the auction did anything to stop the aggressive behavior and left the abuse to continue.

Thankfully, it was a slow day for the auction and many of the loose horse pens were quite empty. With the extra space kicking and fighting were avoided for the most part. The investigators did note that several of the large draft horses had neglected feet. 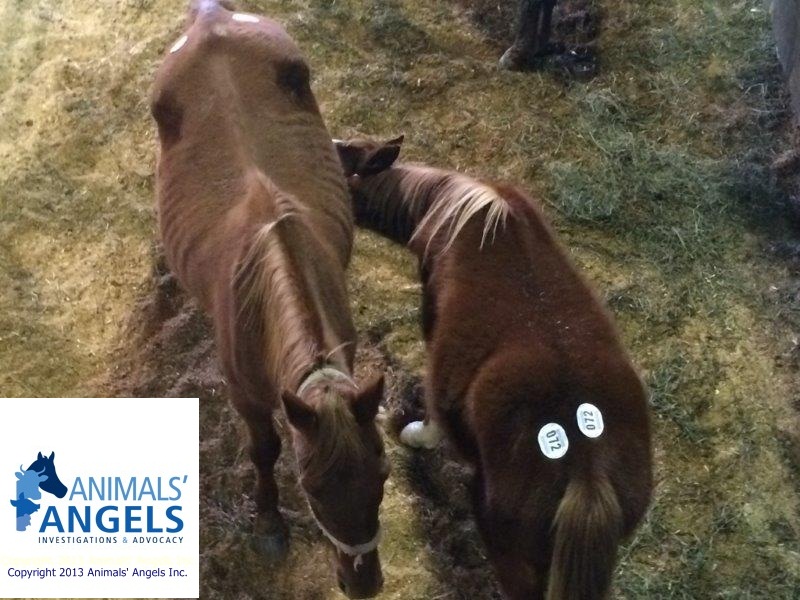 One had a very swollen left hind leg, possibly a “milk leg.”  Another horse, a bay mare, had a large wound on her side. While it had already started to heal, the injury itself was still quite significant. In addition, several of the horses appeared very fatigued.

Two horses kept in the back, likely leftovers from the previous week’s shipment, had already been tagged for slaughter and did not go through the sale.  The other back pens held cows and one very small calf.

Kill buyer Fred Bauer arrived in his white semi shortly before the sale started at 2:00pm. Horse trader Fisher was also in attendance. Horses were led into the auction ring, in groups of five, by workers with flags. The handling itself was chaotic and due to their agitation, it was clear that the horses were frightened. The sale lasted approx. 90 minutes with Bauer purchasing a majority of the horses. In total, around 53 horses, a few minis and ponies, and two llamas were sold.

Most people left the premises immediately after the auction closed but Bauer stayed to load his new purchases. About an hour after the sale ended, when the parking lot had emptied out, Bauer drove his truck up to the loading ramp and began quickly loading horses into the trailer. Workers were yelling at the horses during the frenzied loading process as the horses thrashed around kicking the sides of the trailer. The truck left the grounds at 4:14pm. After that, no more activity to note was witnessed.