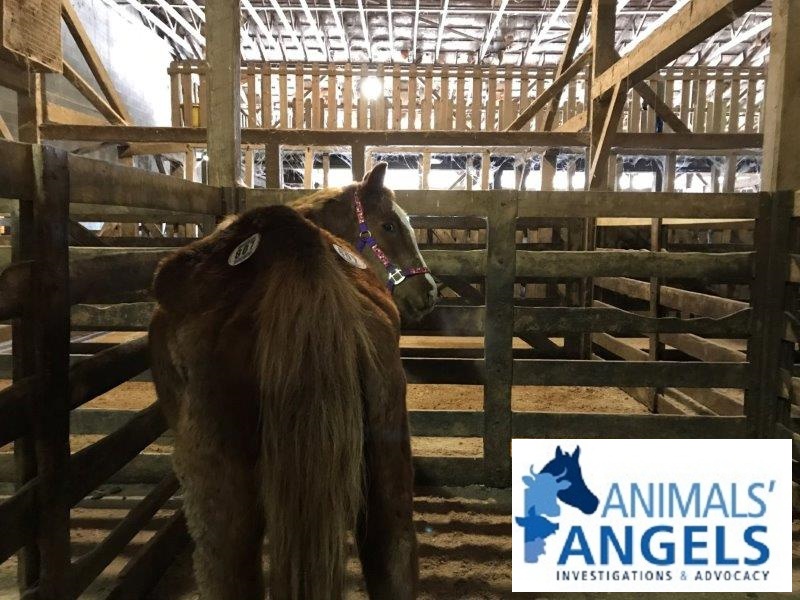 Animals’ Angels investigators returned to the notorious Sugarcreek Horse Auction, operated by long term kill buyer Leroy Baker. Baker has been in the slaughter horse business for a long time and has violated the Commercial Transport of Equines to Slaughter regulations and other animal protection laws numerous times. We have filed countless complaints and several cases were brought against Baker, based on our evidence. However, in many severe cases authorities declined to file charges, even when overwhelming evidence had been obtained.

In 2008, USDA Administrative Law Judge Jill Clifton, ordered Baker to pay a fine of $162,800.00 for multiple violations of the Commercial Transport of Equines to Slaughter Regulations (shipments of blind and/or severely injured horses). Among the animals involved in those incidents, several were unable to bear weight on all four legs and subsequently went down in the trailer during the transport. Other horses had to be euthanized immediately upon arrival at the plant or arrived already dead. In 2010, the United States District Court/Northern Ohio District/Eastern Division increased the original penalty to $172,621.66 and issued a court order to garnish his wages & assets. However, it remains unclear how much of this fine has been paid.

When investigators arrived at the January 19th sale at 11:00 am, they immediately noticed that the parking lot remained half empty even though the tack sale had already started. Inside the pen area, most of the pens were empty. The large pens in the back, usually used to hold Baker’s slaughter horses prior to shipment, held Holstein and Swiss dairy cows. 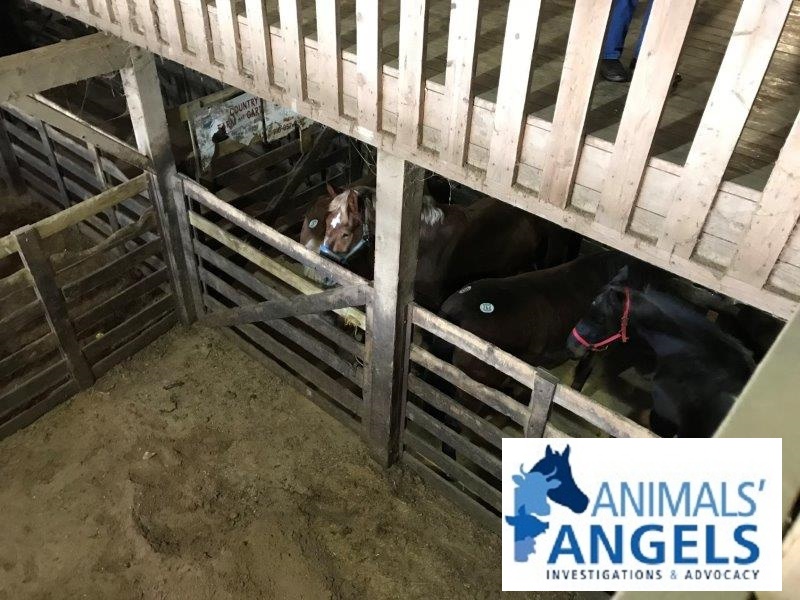 Overall, investigators counted 26 horses, 1 mule, and 2 minis in the pen area, which is a very low number for this well-known slaughter sale. Talking to a local auction visitor, investigators were informed that the sale had been “slow” for quite some time now, with 20 - 40 horses maximum compared to the 200+ the sale used to have at its peak. The local visitor added that Leroy Baker himself had been observed buying only very few horses.

This information matches the details Animals’ Angels received via Freedom of Information Act Request: The paperwork showed a significantly decreased number of owner/shipper papers and a definite decrease in horses shipped to Canada for slaughter by Baker. While it is too soon to draw conclusions, this is definitely a promising development.

Most of the horses inside the pen area were discarded Amish Standardbreds. There were also two discarded Belgium Draft Work Horses, both with neglected feet and cracked hooves. Other than the hoof issues, the overall condition of the horses was good.

However, at 11:30 am, an extremely emaciated (BCS1) chestnut gelding was dropped off at the sale. Tagged with number 807, the nervous animal was put in a pen by himself, where he immediately began weaving. His entire spine and his hip bones were clearly visible and protruding through the flesh. The horse should never have been accepted for sale and the owner should have been reported to law enforcement immediately. Investigators gave the animal some hay, which he eagerly attacked.

Investigators documented the horse’s condition and then called the Tuscarawas County Humane Society; whose humane officers oversee enforcing Ohio’s animal cruelty laws in the county. Explaining the situation to the shelter director, the response was less then promising. She stated that she would have to “research the situation” since “they already were selling the horse, getting rid of it” and that she didn’t think that there was anything she could use to “nail them with.” Explaining that the owner should be held accountable for depriving the animal of necessary sustenance, which Ohio law clearly considers a violation of the cruelty statute, AA investigators also informed her that the auction obviously has the owner’s information, otherwise they would not have put a sales tag on the horse. The shelter director responded that she would forward this to her humane officer and ended the phone call.

Investigators returned to the barn and observed the situation. At 1:00 pm, the horses were moved closer to the auction ring. In addition to Baker, kill buyer Bauer was in attendance as was Pennsylvania horse trader Fisher. The sale started at 1:11 pm. Bauer purchased 7 horses and Fisher bought 8 animals, all priced between $345 and $675. Buyer #109, who is believed to be an Amish trader, bought 9 horses, mainly Standardbreds. Surprisingly, Baker only bought 1 horse.

The emaciated horse (#807) also went through the ring. However, no one wanted him, and he was put back into the pen area. The sale ended, and the parking lot quickly cleared out.

Fisher loaded his animals and left. His pick-up truck did not have a DOT number or name displayed, which is a violation of the Federal Motor Carrier Safety Regulations since he is engaged in interstate commerce. 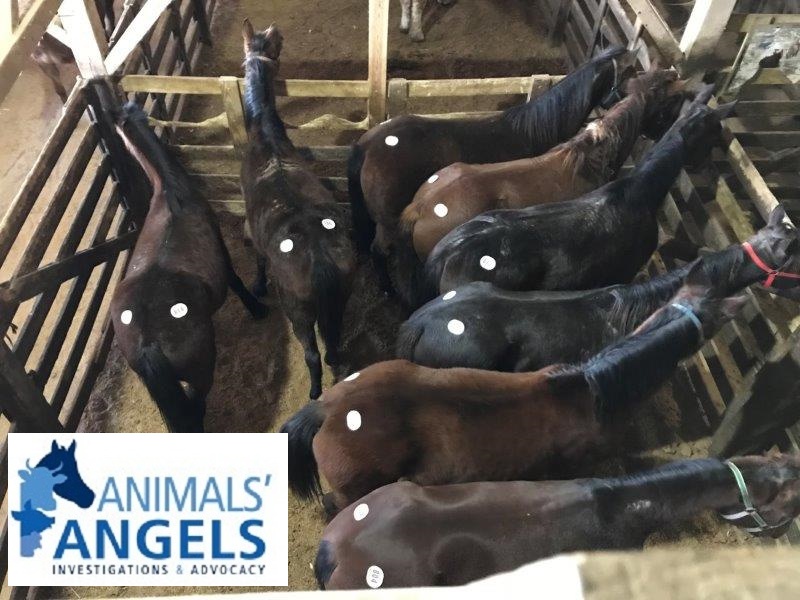 The humane officer never showed. AA investigators remained onsite for as long as possible, hoping to observe who picked up the emaciated gelding. However, no-one came to do so, and the horse was left at the auction. When investigators returned to the barn very early the next morning, the horse was gone. One can only assume that the owner, afraid of being detected, picked the horse up in the middle of the night.

This unfortunate outcome could have been avoided if the entity in charge of enforcing Ohio’s cruelty laws had done their job. Without proper enforcement, yet another animal abuser continues to go unpunished. AA will follow up with the leadership of the Tuscarawas County Humane Society to prevent this from happening again. Additionally, complaints will be filed regarding all other violations observed.