When investigators arrived at this large monthly horse auction, it was a very hot day with temperatures of 95 degrees Fahrenheit. There were approximately 350 to 400 horses offered for sale, the majority of which appeared to be kill buyer prospects.

AA investigators watched the unloading from the catwalk that overlooks the extensive pen area. It stood out that most of the horses brought to the sale were in large groups rather than individual horses -- entire herds were being dumped at the sale. 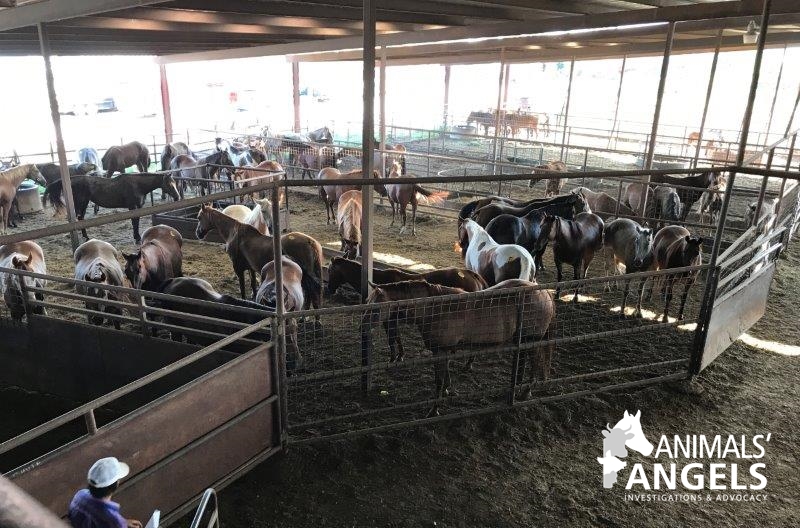 Among the herds brought to the auction was a large group of approximately 40 younger mares (approximately 6 to 8 years old) with their colts/fillies by their sides. They appeared to be fairly unhandled and were clearly frightened when they were moved around in the pen area.

One of the mares appeared to be extremely exhausted and distressed as she immediately laid down in the pen. Despite the hot temperatures, only a handful of pens had access to water, and several horses were dehydrated (determined through a pinch test). 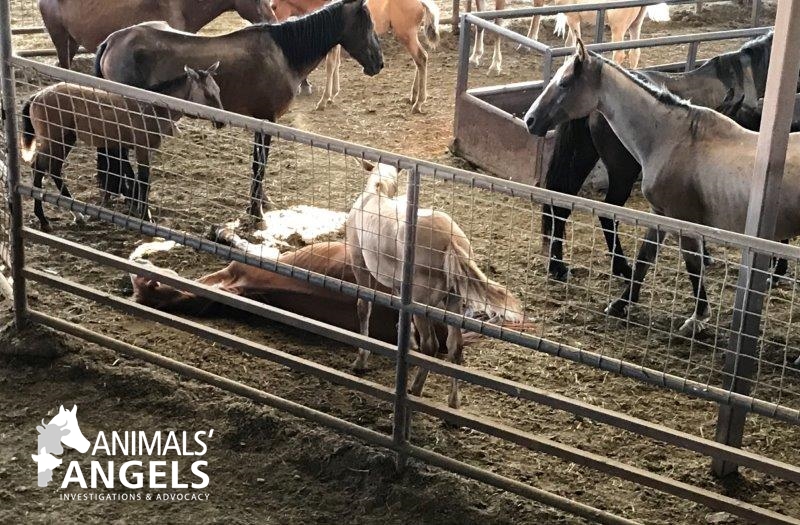 The horses were checked in through a narrow chute and blood was drawn for Coggins testing. The person conducting the blood draws showed no concern whatsoever for the frightened and agitated animals and was observed several times inserting the syringe into a horse’s neck and then leaving it stuck in place while getting the next horse in position. Many of the horses tried to back up in the chute or tried to rear up, which had serious potential for injuries. 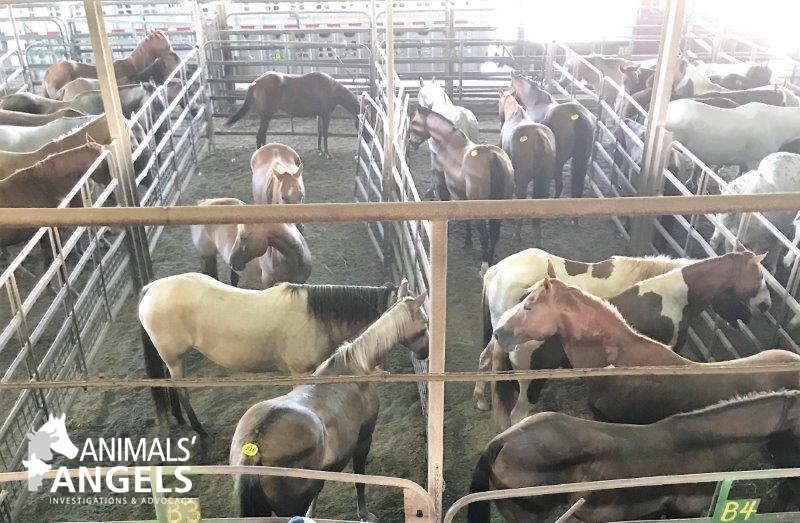 All the loose horses were kept in large pens towards the back of the auction. Investigators noted several horses were in extremely poor condition. One pen held horses with various stages of strangles infection.

The sale started with stud horses at 6:20 pm. Afterwards, a pen of donkeys was sold, followed by riding horses. Loose horses sold last as expected.

Several aggressive horses had been put into the large pens with all the other loose horses, causing a great deal of fighting, kicking, and biting. Due to the fighting, one of the riding horses, which was tied/restrained, started rearing up and fell backwards, almost breaking his neck. A bystander managed to cut the rope to keep the horse from injuring itself further.

The handling inside the pen area was very rough and a lot of unnecessary hitting and unskilled movement was observed. One worker was observed getting angry with a horse and slamming the gate on the horse’s face with full force.

The chute leading into the auction ring appears to be ill-designed for horses to begin with, the animals were observed panicking when they arrived at the closed door. In their panic and fear, many of the horses managed to turn themselves halfway around inside the chute, which caused them to get wedged between the barriers.

Inside the auction ring, kill buyers O’Dwyer from the Bowie auction, Joe Rios, and Trenton Saulters were buying most of the horses that went through the ring at a fast pace. O’Dwyer bought approximately 30 of the mare/colt/filly pairs, paying on average $375.00 per pair. It was interesting to note that these same pairs were offered a week later via his broker program for $650-$750.

Rios bought one of the mares apparently for slaughter and did not want the foal, which was immediately separated from his mother and sold to a different buyer. Horse trader Blake Thompson was also present, as was Florida trader Norman Franklin.

AA will continue to monitor this sale and as always, report all violations to appropriate enforcement agencies. As well, we will continue to strongly urge management to improve handling, Coggins test procedures, and chute access to the ring.