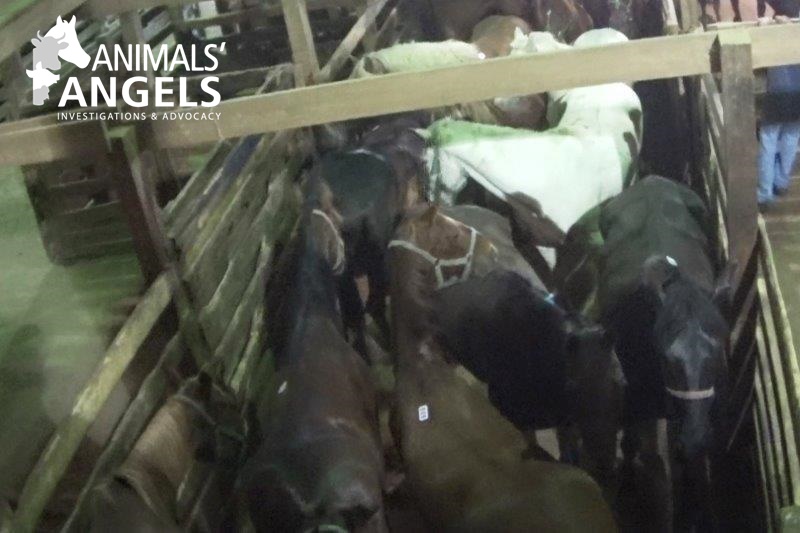 Investigators returned to this weekly horse auction in LaGrange County, IN. The county is also the third largest Amish settlement in the U.S.  The Shipshewana Horse Auction has a long history of catering to kill buyers and to this day several of them frequent each and every sale.

Among them is large scale kill buyer Jeron Gold from Fairhaven, MI who delivers hundreds of horses each month to the Viande Richelieu plant in Quebec. In fact, Gold and Shipshewana’s manager, Lambright, maintain a very friendly relationship and Gold bids straight from the auction ring with Buyer #1. Horse trader, Randy Beasley from Michigan, was also in attendance. 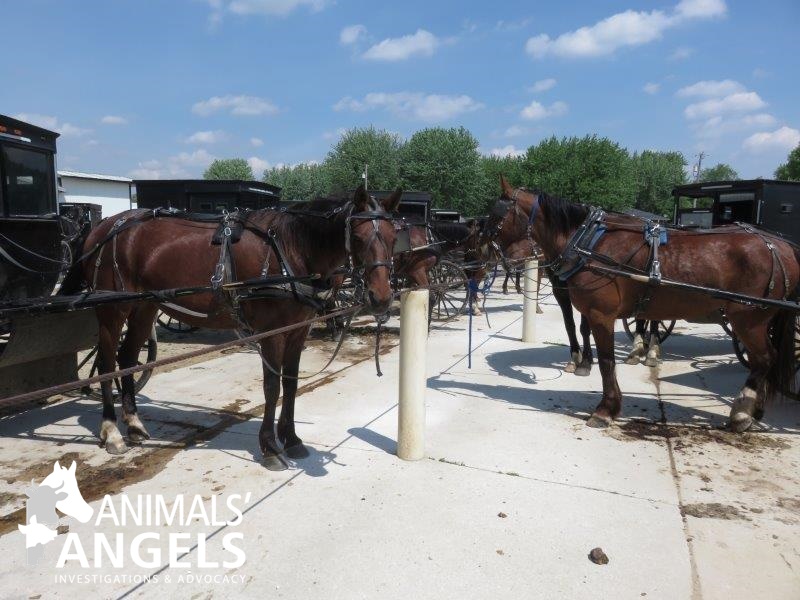 AA has monitored this sale since 2009 and we have reported the auction for its abusive handling of the animals on many occasions. This recent visit was to determine if there has been any positive change or improvement in the auction’s protocols, handling, and/or treatment of the animals in their care.

Investigators arrived at the location at 10:30 a.m.  It was a very warm, sunny day. There were quite a few Amish buggy horses already tied up behind the sale barn, standing on the hot concrete with no shelter from the sun or access to water.

There was a surprisingly low number of horses present inside the barn, and during their first walk through investigators spotted approximately 30 horses total – three minis, four pens of loose horses, and a few saddled riding horses. 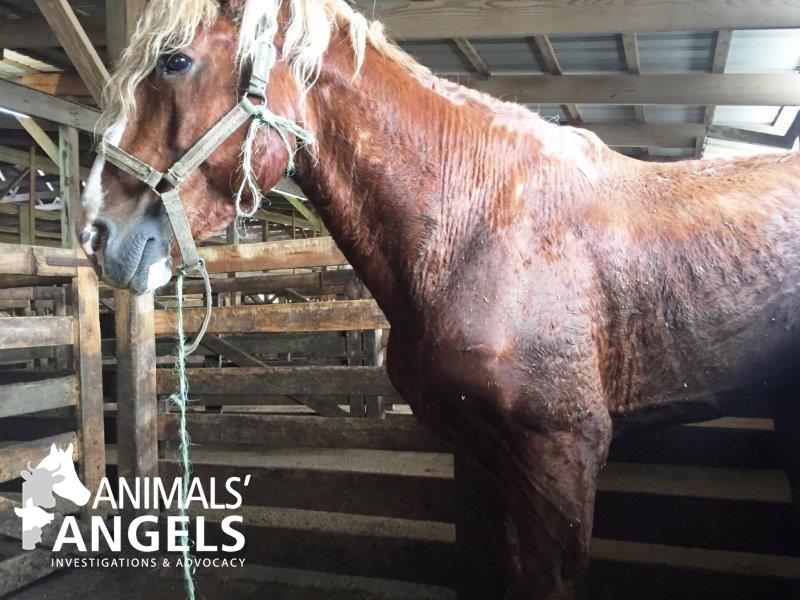 All the way in the back, in a pen by himself, investigators found a neglected Belgian Draft Gelding, Sales Tag # 815, with severely overgrown feet. The hooves were so long that it quite clearly affected his ability to move normally.

There was no obvious reason as to why he was tucked away all by himself other than to hide him from the view of most auction visitors. No water was available for him or any of the horses in the crowded loose horse pens.

The horses inside the loose pens were agitated, and kicking and biting was observed. It should be noted that there were plenty of empty pens available for use, so there was no need to pack these horses so tightly together in just four pens. 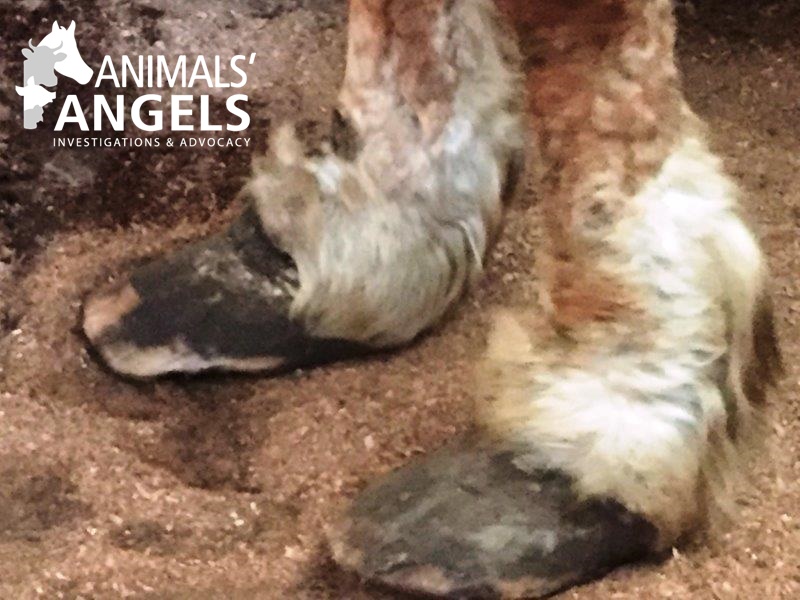 At 11:00 a.m., investigators observed a trailer as it backed up to the unloading area and quickly off-loaded a group of six horses. They were immediately put into one of the loose horse pen. One of them, a chestnut colt, Sale Tag #833, was quite thin, with hip bones and ribs clearly showing. He constantly held his head low and looked extremely dispirited.

The sale started late at 11:39 a.m., with the minis and riding horses selling first.

After these sold, the animals in the four loose horse pens were moved closer to the auction ring as one group and put together in one large pen. The horses were highly agitated at this point, and again, biting and kicking was observed. A dark bay horse, Sales Tag # 824, was spotted with a severely swollen right hind knee. 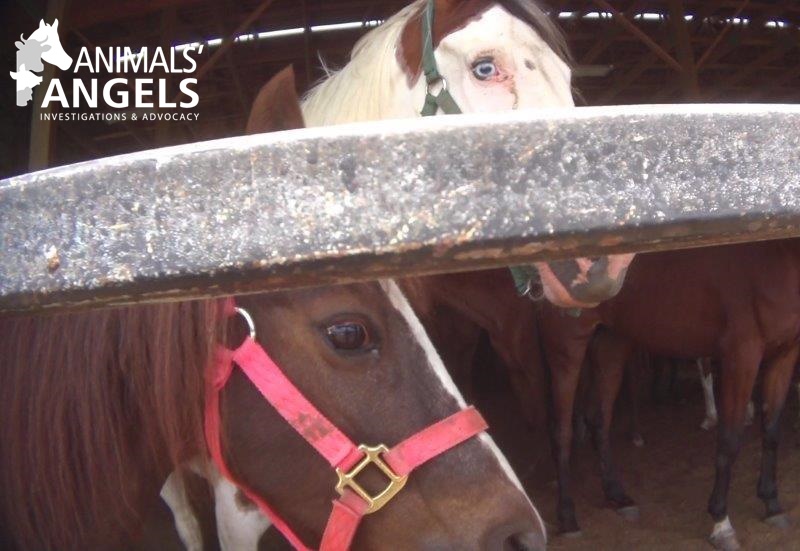 The loose horses sold at a very fast pace and Gold as well as Randy Beasley were grabbing most of the horses.

One of the horses was described as smooth” and “broke” by a seller, but it still ended up with kill buyer Jeron Gold. Lambright, the auction manager, even joked with Gold, stating: “Jeron, but it’s broke.”  Gold laughed and responded sarcastically: “Stop the sale!”

The Belgian Draft with the overgrown hooves and the emaciated chestnut colt, thankfully, did not go to the kill buyers. 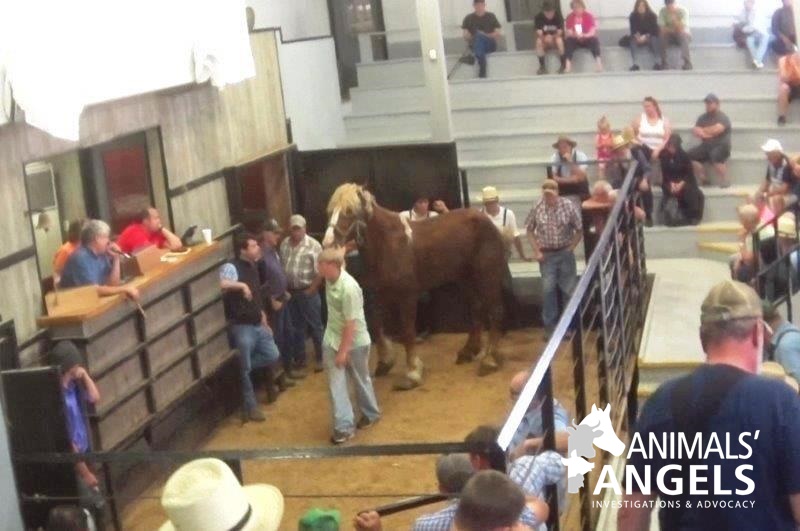 The sale was over at 1:11 p.m. and most horses were loaded immediately afterwards. Randy Beasley loaded his pick-up and stock trailer right after the sale with a great number of horses and presumably headed back to Michigan. Jeron Gold, also with several horses, left quickly as well.

Sadly, this investigation revealed that the auction is still the kill buyer sale it has always been – there are just fewer horses for sale than in the past.   AA will continue to monitor the situation.