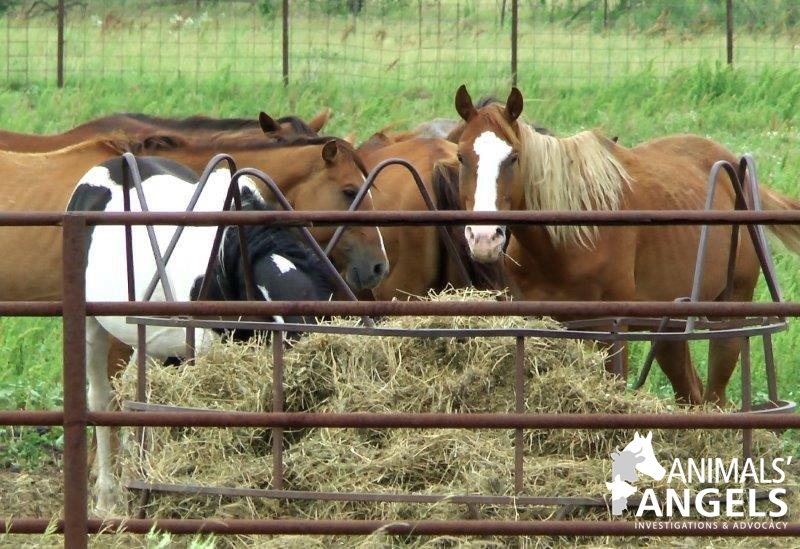 Animals’ Angels investigators returned to the premises of Raymond Tucker in Ft. Scott, Kansas to assess the current situation at the location. Since our last visit in May 2015, Animals’ Angels has received multiple complaints regarding the ongoing poor conditions at Tucker’s collecting station. Several people have also reported dead horses being dumped and left to decay on the property.

Raymond Tucker, d/b/a/ Tucker Brothers LLC, is a long-standing kill buyer, who has a record of shipping horses to Mexico for slaughter. As many know, Tucker made the news back in 2010 when seven of his “rejects,” were discovered suffering in an abandoned trailer.

The truck, belonging to Justin Harvey, had apparently broken down on the interstate and had simply been abandoned, along with the horses inside. The internal temperature of the trailer had reached 140 degrees and as a result, two of the horses died, with the remaining animals suffering from serious distress and malnourishment.  (USDA IES Case TX10845)

For several years now, Tucker has partnered with a Missouri broker/rescue program advertising his horses via Facebook. This profitable side-business secures him an income stream of approximately $10,000 to $15,000 a month. 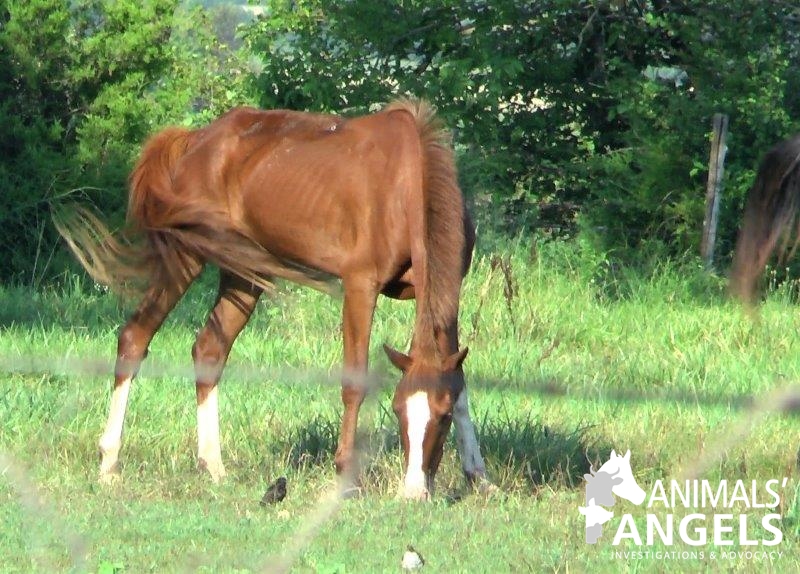 In fact, the advantageous partnership appears to be flourishing. Recently, the property at which to pick up the broker program purchases changed from Ft. Scott, KS to Collins, MO – a small town conveniently located just 10 minutes away from the broker program’s home base in Humansville, MO.  Now, in addition to the already inflated prices for the horses offered, buyers are charged yet another fee of $25.00 for the transport from Ft. Scott to the new pick-up location AND $10.00 per day for any day the horse remains at the feedlot after being purchased. 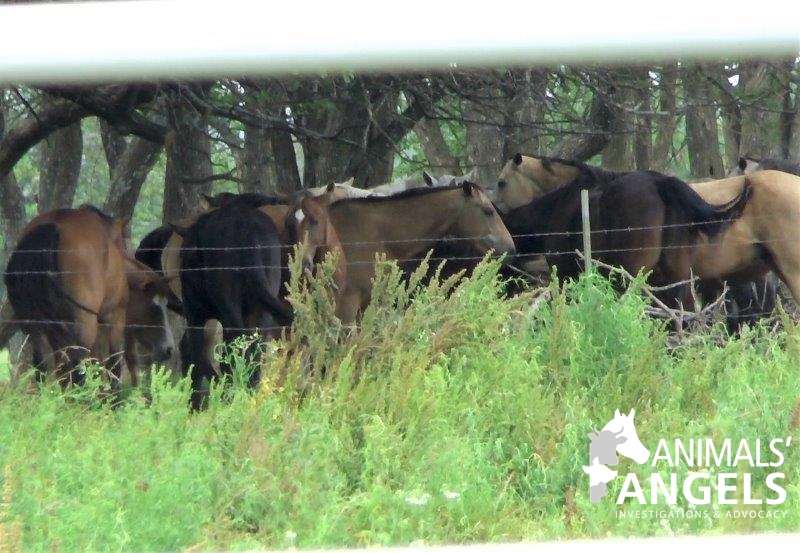 AA investigators visited the feedlot several times between 6/14/17 and 7/17/17 to evaluate the conditions of the location.  As with our last investigation in 2015, the property looked run down and dilapidated. No repairs appeared to have been made and there was still broken pipe fencing, loose barbed wire, wire with large holes, and sharp metal pieces scattered around.

No dead horses were visible, but large parts of the property were covered in tall grass and underbrush, so it was impossible to be certain. Several vultures were spotted maintaining a presence on the left side of the premises, close to where images provided to Animals’ Angels showed that the dead horses were dumped. 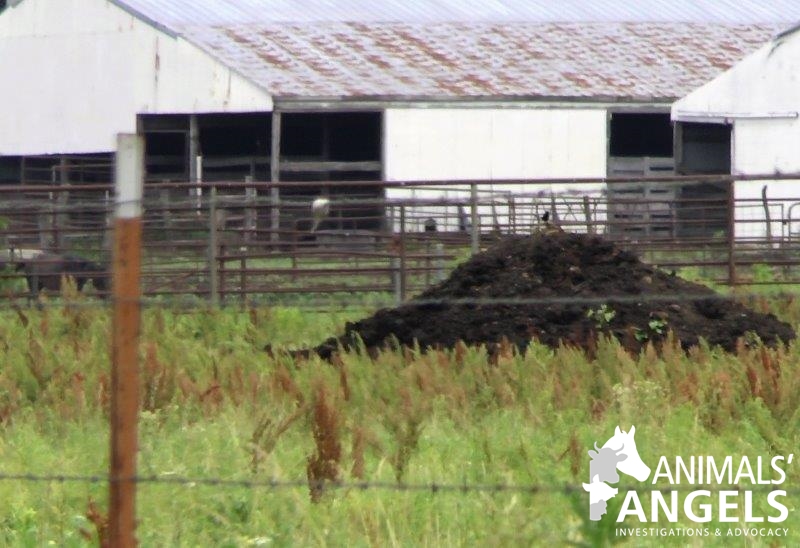 There were approximately 20 to 30 horses on the property during each of our visits. Several horses were quite thin with their ribs and hip bones clearly showing. Some had auction tags still attached.

However, no USDA slaughter tags were visible on any of the horses. It was also noted that many of the same horses present on 6/14/17 were still on the lot during our subsequent visits over a month later, on 7/17/17.  This behavior is highly unusual for a kill lot, since most kill buyers routinely ship the horses just a few days after the animals are bought in order to avoid feeding costs as well as risk of injuries and illnesses at the lot so as to maximize profits. 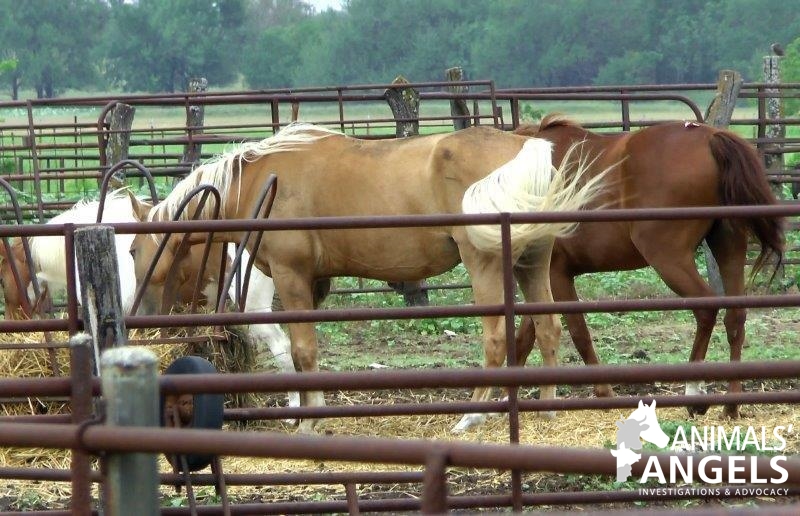 Although there was not a great deal of activity at any time our investigators were onsite, several pick-ups with stock trailers were observed picking up small quantities of horses.  At no time did we witness potential slaughter shipments being loaded, or even the preparation for such shipments.

Based on these observations, it cannot be confirmed with any certainty that Tucker is still actively shipping horses to slaughter. Animals’ Angels will continue to monitor this property and Tucker’s operations. 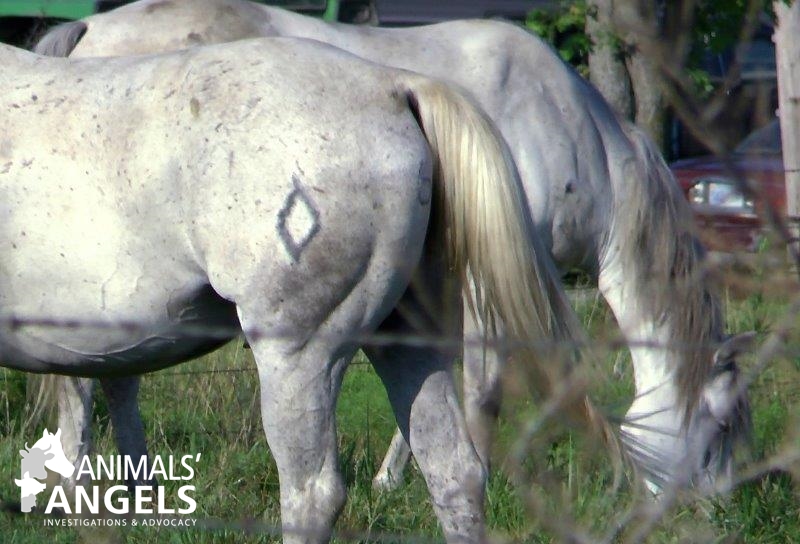