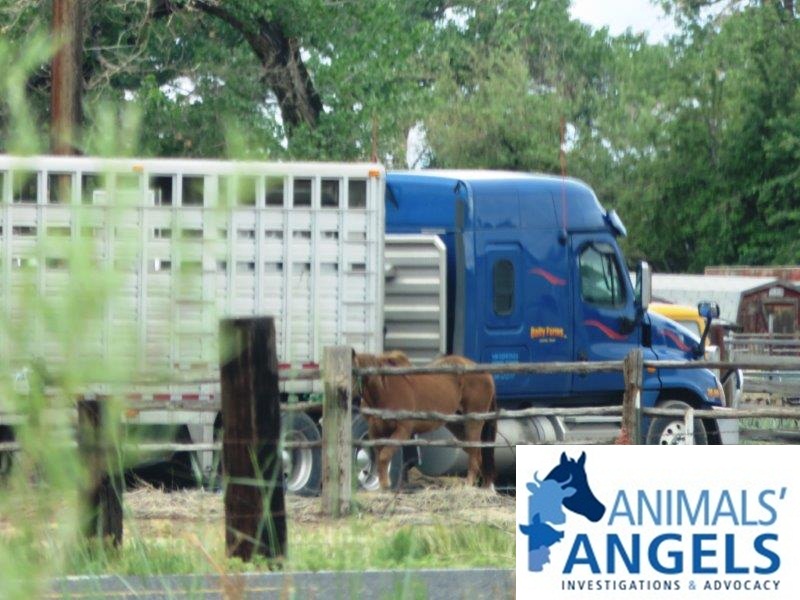 Animals’ Angels visited the Q & B Slaughter Horse Collecting Station in May to check on the conditions and treatment of the horses kept at this feedlot.  This feedlot is operated by Zena Quillan and supplies horse to the Bouvry plant in Fort McLeod, Alberta. Quillan has been in the horse slaughter business for a long time and has a sordid history including violations of the Commercial Transport of Equines to Slaughter Regulations.  Quillan is linked to several other slaughter-horse business associations, such as Q&B Horse Exports, QB Horse Exports, Horseshoe Meadows, and the Fallon Feedlot.

Upon arrival at the facility on Tuesday (5/20/14), investigators immediately noticed that the premises were very run down.  Portions of the so called “barn” were falling apart and the roof had several holes. The pen fencing was in a similar ramshackle condition, having been put together with a mixture of barbed wire, wood poles and dented metal pipes.

Our investigators observed approximately 30 to 35 horses inside the main pen area. These horses were already slaughter tagged and also had large, yellow numbers on their hips. Several of the horses were extremely thin with their hip bones clearly showing. Although investigators monitored the premises for some time, there was no activity.

Investigators returned to the property on Wednesday morning (5/21/14) at 8:00 a.m.  A blue “Dally Farms” semi from Jerome, ID was parked next to the pen area.  This same truck had been spotted at the Shelby feedlot in 2013 delivering horses with a solo driver. 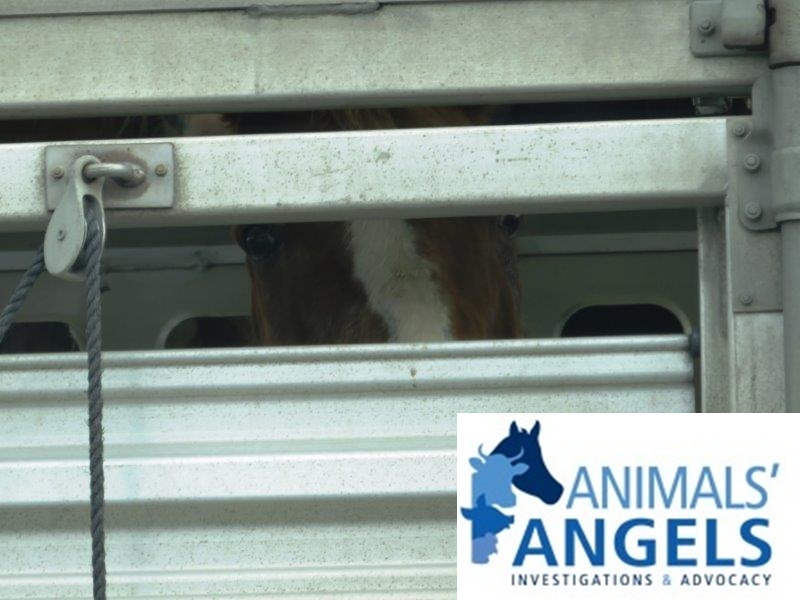 At 8:19 a.m. feedlot personnel started loading the horses. Much to our investigators’ surprise, the horses were loaded into the Wilson Stockmaster PSAGL single deck through the small side door rather than the loading doors at the back -- something we have never seen before.

Needless to say, this caused a great deal of obvious stress and fear in the horses as they were forced to go through such a small opening.  The loading itself was impatient and chaotic. The horses were overly rushed which caused several to panic and fall down in the narrow loading chute as they struggled to enter the trailer.  Investigators witnessed feedlot personnel hitting the horses hard on their face and head with wooden sticks/flags. Horses that investigators had seen purchased the night before at the Fallon Livestock Auction were among those loaded.

Shortly after the loading was finished the truck, manned by a solo driver once again, started out of the feedlot. It should be noted that it is approximately 1014 miles from Fallon, NV to Shelby, MT, the destination of these horses. The transport takes about 14 ½ hours, which makes it impossible for a solo driver to carry out this trip legally. This company already has multiple violations including:  driving extended hours and keeping false log books.  This is a clear risk to public safety due to overtired drivers.

Our investigators followed the transport truck until it became clear the driver was headed to Montana at which time they returned to Fallon to continue documenting the Q & B Collecting Station.

Back at the Quillan premises very few horses were left in the pens.  Among them were two large Belgian Drafts that had been sold for $1500 to a private individual via the Facebook page run by Zena Quillan’s daughter (Fallon Feedlot Sales).  AA has reported this incident to USDA & DOT for follow up.