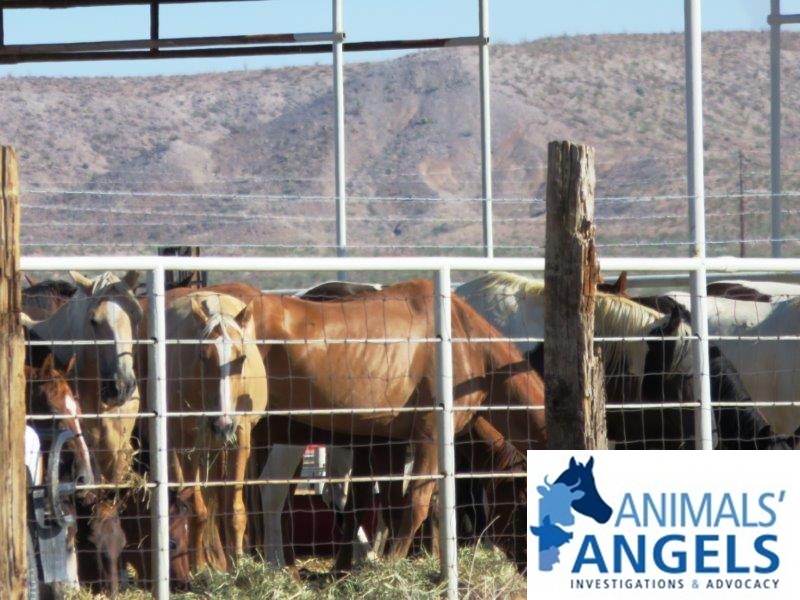 Investigators returned to the Presidio Export Pens on July 9, 2014.  Upon arrival at 9:00 a.m., they immediately noticed that all three pens already held horses, indicating that deliveries had taken place during the night before.

There was only one US truck at the pens which was parked empty next to the C4 pen entrance. The trucking company was C & L Trucking (DOT 1765925) based out of Tecumseh, OK. It should be noted that C & L Trucking has multiple transport violations and has exceeded the intervention threshold.

The investigators noticed that the old Ruben Brito pens had been completely demolished and that the business had moved to a new location across the street. The new pens have a small office building, a Senasica inspection station with a loading ramp in the front of the premises and an extensive pen area in the back. 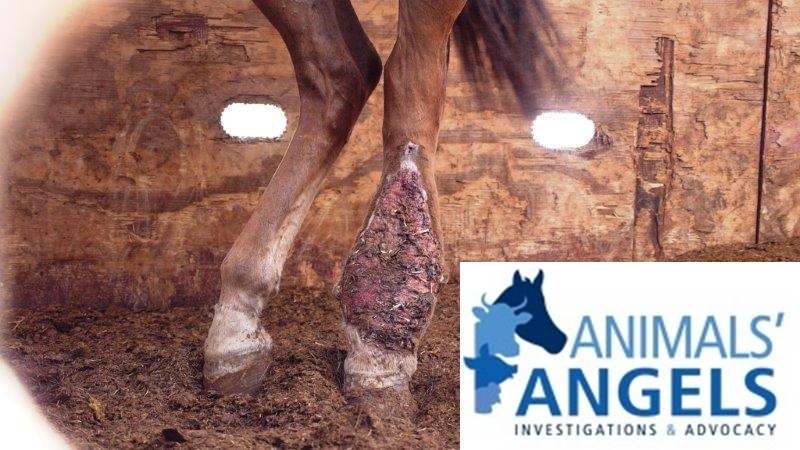 All pens have a metal water trough and small metal roofs for shelter. However, the roofs are very small and do not provide enough shade for all of the horses in the pen area. A small amount of hay had been scattered along the fence line. The more dominant horses were observed guarding the hay and prohibiting access for all of the other horses.

The majority of the horses were in average condition, several were thin with ribs showing. A grey mare had a swollen, bleeding wound over her left eye, likely a transport injury.

The C4 pens appeared even more dilapidated than during AA’s investigation in 2013.  A great deal of trash was visible on the premises and large manure piles covered with bones were all around the pen area. The horses still had no shelter from the desert sun.

A very small amount of hay was visible in the front pens and a group of approximately 15 horses, of which several were quite thin, was gathered around it. However, ever since our complaints to law enforcement about the conditions at these pens, the majority of the horses are held all the way in the back of the premises far away from the public’s eye. The condition of these back pens as well as the existence of food, water or shelter is currently unknown.

At the Baeza pens, a group of 12 slaughter tagged horses was visible in the front pens. Several of them were very thin. The pens provided them some hay, but still no shelter had been installed. In a separate pen, a small group of mares & foals was visible.

There was no activity, so the investigators drove to the border to see if any trucks were already crossing. When they returned to the pens at 11:00am, the C & L truck had just left the Baeza pens with a load of “rejects.” (Horses that have been rejected by the Mexican veterinarian and therefore cannot be exported.)

Investigators followed the truck as he was heading north towards Marfa. The driver was speeding, at times driving as fast as 90 mph. When the truck had to slow down on a steep hill, investigators overtook the vehicle to film the horses inside the trailer. The driver reacted extremely angrily and tried to push the investigator’s car off the road.

In Marfa, the driver pulled over next to a gas station to get something to eat. The investigators were able to document the conditions of the horses inside the trailer. One of them had a horrific injury on his left hind leg. The lower leg was swollen to almost twice its regular size and an open, severely infected wound stretched all the way from his ankle to his knee. Flies were present on the exposed flesh. After documenting the injury, investigators immediately called local law enforcement. However, the police never arrived on the scene and the truck continued towards Oklahoma. 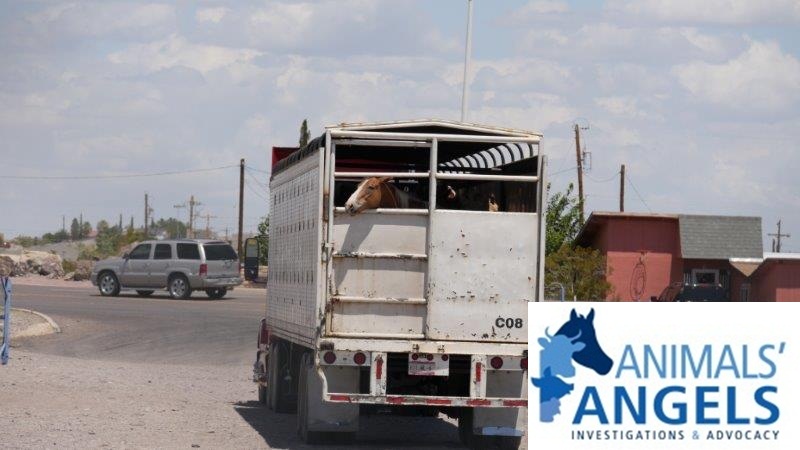 The investigators returned to Presidio to watch the export of horses to Mexico in the afternoon. By this time the temperature had reached 100 degrees. Back at the C4 export pens, a Mexican transport truck loaded with horses was parked in full sun. The red truck (Trucking Company: Moreno) was pulling a single deck, aluminum trailer with small air holes on both sides. However, the holes were quite small and not enough to guarantee sufficient air low inside the metal trailer and one can only imagine the temperatures inside.

One of the Mexican trucks was pulling a single deck trailer with completely closed, wooden sides, which makes it next to impossible to even tell that there are live animals inside the trailer and eliminates airflow significantly if not completely. The fact that the sides were closed completely is very concerning. How is the driver checking the horses during transit?

At 3:30 p.m., the trucks proceeded to the border crossing. To avoid the possibility of anyone looking inside the trailer, the trucks pulled all the way into the border check point. After a brief stop in the office to have their paperwork examined, the drivers returned to their vehicles and crossed into Mexico.