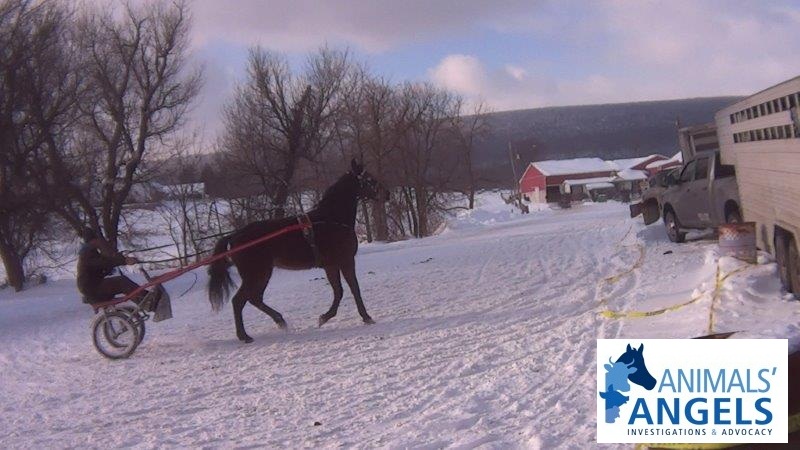 Investigators arrived at the Penns Valley Horse Auction on January 30, 2015 at 12:30 p.m.  The tack sale was already in progress. It was an extremely cold day with the temperature at 19 degrees Fahrenheit and 25 mph winds. The parking lot was covered in snow making it very difficult for trucks and trailers to enter and several got stuck.  Regardless, the parking lot was crowded with many PA horse traders present including Brown, the Hoover Boys, Jonas Kauffman, and Charles DeHart.  DeHart made the news in 2014 when he was charged with animal cruelty for failing to properly care for a severely injured horse on his property. The horse in question had apparently been left to languish in DeHart’s barn with both back legs broken (according to eye witness) and injuries to its forehead. Brian Moore was also seen at the sale, his maroon colored semi single deck trailer parked in the lot. 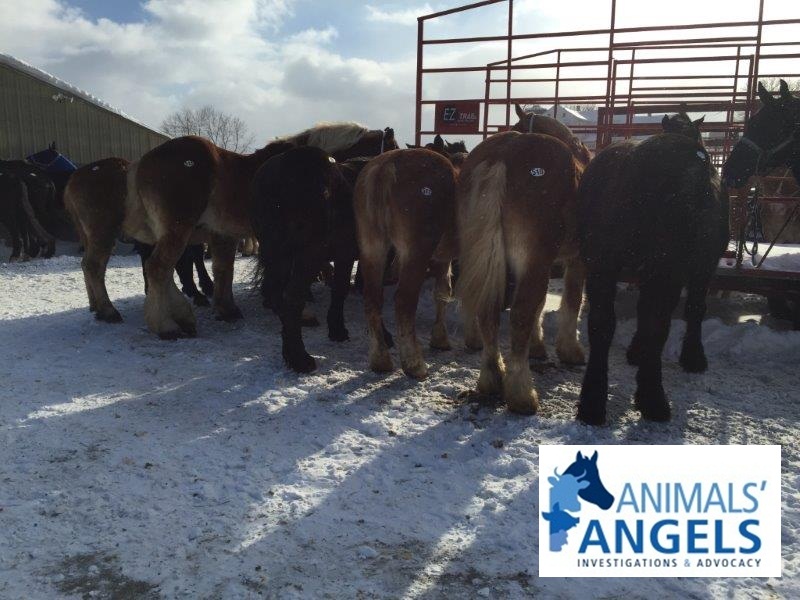 Even with the inclement weather, the sale was very busy this day, having approximately 450 horses for sale, 223 of which were listed in the sale’s catalogue.  There were mainly Standardbred driving horses and Belgium Drafts available.

Investigators entered the barn and immediately noted that the pen area was extremely overcrowded. The horses had been packed in rows like sardines with no room to move. All of the horses’ heads had either been tied to food troughs or to the wooden cross beams above them to prevent them from moving around. Several horses were naturally very agitated and multiple incidents of biting and kicking were observed.  The “slaughter prospects” were kept outside of the barn and at the back of the property, despite the freezing cold weather and the icy wind. Several were very thin. Some of them appeared very thirsty and were eating as much snow as they could reach.

The horse sale started with the work horses at 1:42 p.m. Kill buyer Brian Moore and his entourage were standing straight across from the auctioneer bidding with #s 28/29. Surprisingly, his former “assistant”, Chucky, was apparently no longer a part of the clique and there was obvious animosity between the two. Chucky, who was wearing a “West Star Horse Sales” jacket, was also bidding with a new number. As the work horses were moved through the sale, Moore purchased several of them for prices between $300-550. His bids never went higher with the exception of two horses he bought for resale at $1125 and $800. Chucky attempted several times to bid against Moore, but was never successful. Chucky therefore proceeded to purchase several of the horses that Moore did not want, paying between $75 and $300 for them. 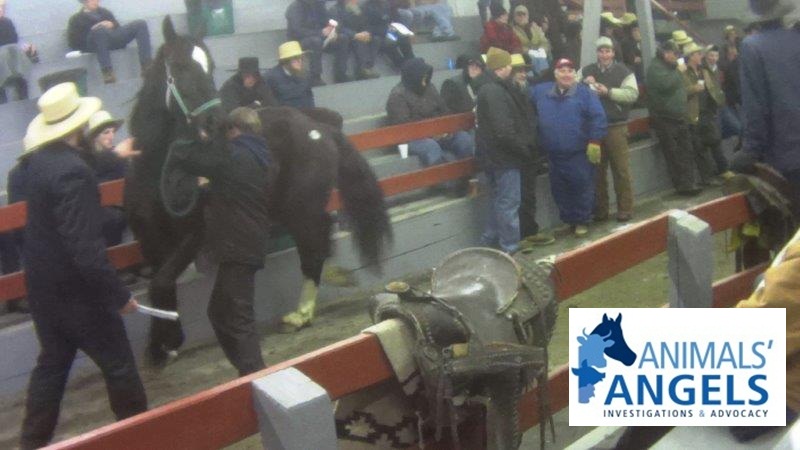 After the work horses, the ponies, and the riding horses were sold, the driving horse sale started. Outside, even in the frigid weather, the mostly Amish and Mennonite buyers were test-driving the horses across an icy field. The animals were covered in sweat and were constantly struggling to maintain their footing on the slippery track. Nevertheless, several of the “drivers” forced their horses to run the course over and over again.

Back inside the sale ring, the auctioneer took a good deal of time to advertise the qualities of the more expensive animals with comments like “willing driver, ready for 20+ miles, fresh, and women can drive.”

Several sold for thousands of dollars. However, not all were so lucky and the cheaper ones -- those who were not “fast enough” or “shy from traffic” or were selling “as is” with “transfer papers signed” -- were snatched up by Brian Moore to fill his load. Animals’ Angels will continue to monitor this sale.