The Orange Horse Auction is typically a monthly sale, but a special sale was held on 5/29/15. 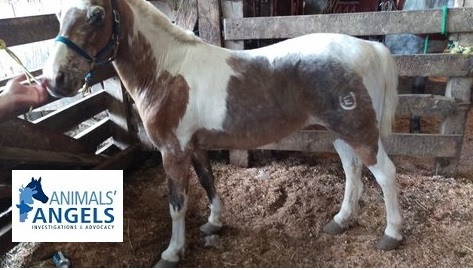 When investigators arrived at 5:00 p.m., the temperature was 83 degrees. The parking lot was full of stock trailers with more arriving; however, there were no semi-trucks present. Several horse traders were observed in attendance including Mike Mawyer of Liberty Stables and James Jenkins of Jenkins Livestock.

The pen conditions were the same as noted on 5/17/15. In addition to the holding pens being dirty and muddy, beer cans were also strewn about (both empty and full). Two holding pens contained water, though at a minimum, while the rest had none. 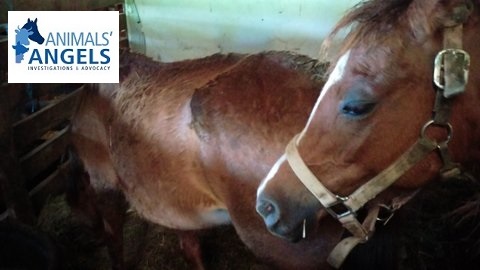 Investigators found approximately 35 horses in the auction area.  Some had been in the holding area prior to the sale; others had been tied to trailers outside.  The outdoor equine observed during the 5/17/15 sale remained onsite.  Also still present were the two emaciated Arabian-type horses inside the barn. Neither had gained weight in the almost 2 weeks since the last sale, and one appeared pregnant to the investigator.  Hay was in their pen, but only 2 inches of dirty water was in their trough. 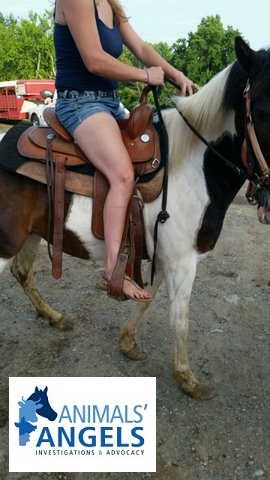 It was noted that the goat with the severely overgrown hooves previously seen at the auction was still there as well. Investigators immediately observed that the goat’s feet had not yet been trimmed. In a nearby pen were 5 pot-bellied pigs. A male pig was seen aggressively mating a female, proving no separation by gender.

Investigators observed excessive alcohol consumption during this visit.  Prior to the sale, individuals were seen riding horses while drinking beer out in the parking lot, and beer cans were found tossed about the property. Alcohol was also being consumed in the auction ring during the sale. Investigators observed stumbling, slurred speech, and visual signs of intoxication from several individuals on the premises. 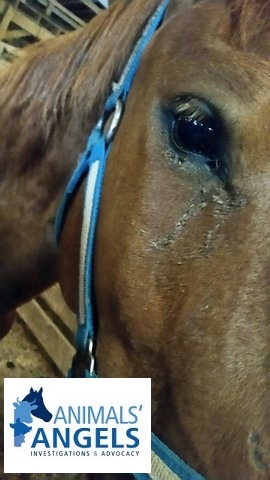 Most of the horses observed were of good weight and condition except for a pinto gelding (Hip 155 sold for $280) with severely overgrown hooves being ridden in the parking lot, and a 2 year old chestnut gelding with swelling on his face above the right eye.

The handling of the horses during the sale was acceptable, but for a few exceptions. Prior to the sale starting, investigators observed handlers from Liberty Stables whip a horse excessively to get it onto a trailer, where it remained until the truck/trailer departed after the sale. During the sale, investigators observed a seemingly intoxicated man (later identified as a local farrier and horse trader) heavily spurring a small donkey and mules through the sale ring.

It should be noted several horses seen in the holding pens were not run through the sale:

Animals’ Angels once again called Animal Control in regards to the two emaciated Arabian horses and the neglected goats. Chief Deputy Trish Dahl reportedly investigated the auction conditions and checked on the animals left at the auction. To date, AA has received no follow up reports from Chief Deputy Dahl.

Animals’ Angels will continue to monitor this sale.