The Orange Horse Auction is a monthly sale which is being held in a dilapidated, old building with an indoor pen area. The building is surrounded by several pastures.  On the date of this sale, the weather was unseasonably warm at 89 degrees.

When investigators arrived at 3:00 p.m., the parking lot was already full with stock trailers; however, there were no semi-trucks present.  Several horse traders were observed in attendance including Liberty Stables, Jenkins Pony & Mules, and Johnny Roach.

The pen area in general was extremely run-down and several pens were full of manure and deep mud.  Many of the pen boards were broken or missing and there was trash strewn throughout the pens.

In addition, not all of the pens had access to water and those that did, had water buckets that were filthy and not filled nearly enough for such a hot day.  There were were no fans to ease the heat. 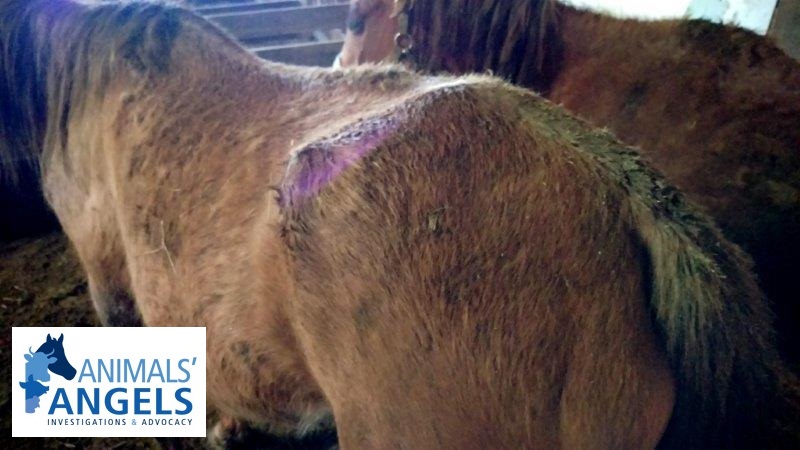 Investigators found approximately 22 horses in the indoor pen area, as well as several goats, a Texas longhorn, a group of calves, and a pig.  One pen held 2 Arabians that were extremely thin with a BCS of 1.5 - 2. Neither had sales tags attached. They each had several small wounds on their knees and hips. The pen they were kept in was filthy and there was little water available. Both horses were very friendly when approached.

In another pen the investigators observed a thin Thoroughbred with a tattoo alongside a very emaciated Saddlebred who had a BCS of 1. They appeared to have been brought in together. 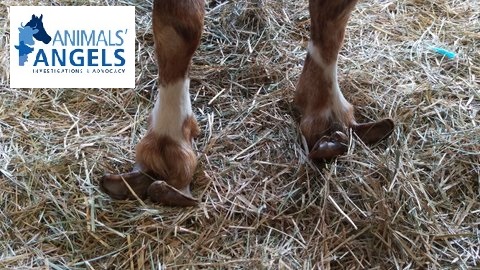 Several of the goats had extremely long hooves – to the point that they forked drastically to the sides and then curled upwards.  Such wanton neglect had to cause severe discomfort if not pain.

The outside pasture held a Mammoth Donkey who had bad feet along with several smaller donkeys and additional horses.  Several of the horses in the outside holding area were quite thin.

The sale started at 3:55 p.m., with only a small audience in attendance.  Several of the horses were no-saled because no-one wanted to pay the asking price. Prices varied drastically from $10-$1400. 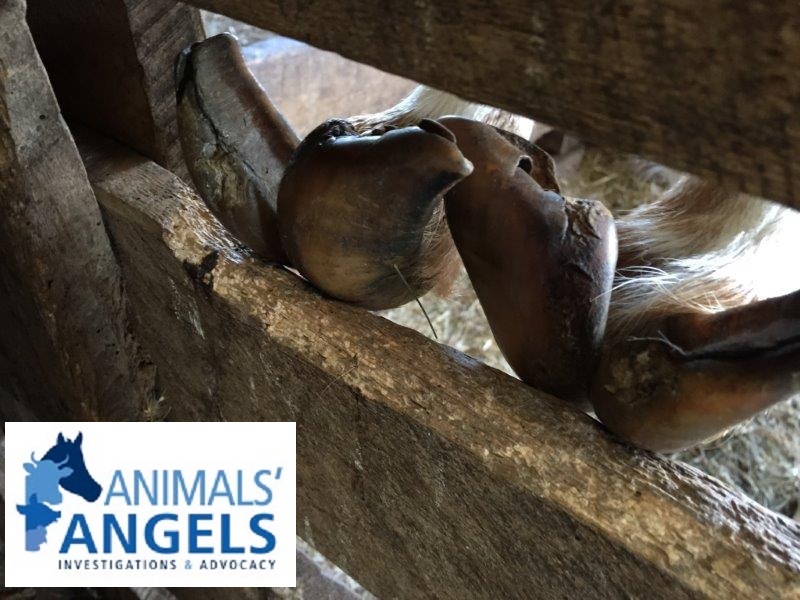 A 2-year old Thoroughbred Colt sold for just $100. The emaciated Saddlebred sold for only $10 to the horse trader from Liberty Stables.

The handling by auction personnel was acceptable.  Most of the horses were ridden through the ring.

The emaciated Arabians and the goats with the severely overgrown, split hooves were not moved through the ring and remained in the barn.  Upon inquiry, investigators were told that they belonged to the auction but we could not confirm this information. 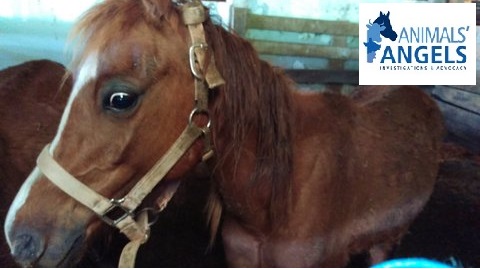 The sale ended at 5:00 p.m. at which time the winning bidders started loading immediately.  Horse trader Johnny Roach apparently didn’t purchase any of the animals and left with an empty trailer. It should be noted that there was no license plate on his truck or trailer, just “farm use” plates.  Liberty Stables bought approximately ten horses.

Animals’ Angels will continue to monitor this sale and has reported the substandard living conditions as well as the poor physical condition of the animals living at the auction to local law enforcement.