Investigators arrived at the weekly sale at 9:00am. It was a warm day, temperatures were already at 82 degrees Fahrenheit. In the parking lot, they immediately saw the trucks of kill buyers/horse traders Cedar Ridge Farm, Arlow Kiehl, Brian Moore, Rotz Livestock and Cranbury Sales Stables. Cranbury had to be expecting a lot of horses since they brought two tractor/trailers. Investigators noted that there were already a few horses inside the Cedar Ridge Farm trailer. 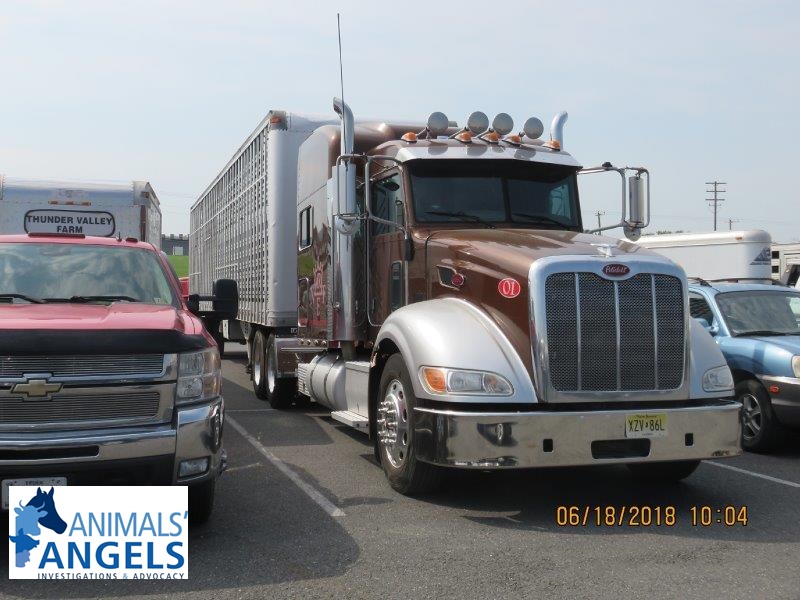 The investigators started their inspection of the auction at the sheep and goat barn. Again, the pens were very crowded and animals with horns were mixed in with all the other animals – bullying the hornless animals around them. The pigs were showing signs of heat stress and were panting heavily. Many of the pens did not have water. Outside the barn, a pig hauler was loading “slaughter” pigs on a double deck trailer. Once he was done loading, he grabbed the water hose and watered both levels of the trailer. The pigs were eagerly licking whatever water they could reach. No dead animals were found inside the pen area. However, the bobcat was parked right next to the pens and the dumpster was full, therefore it is likely that someone had just cleaned out the barn. 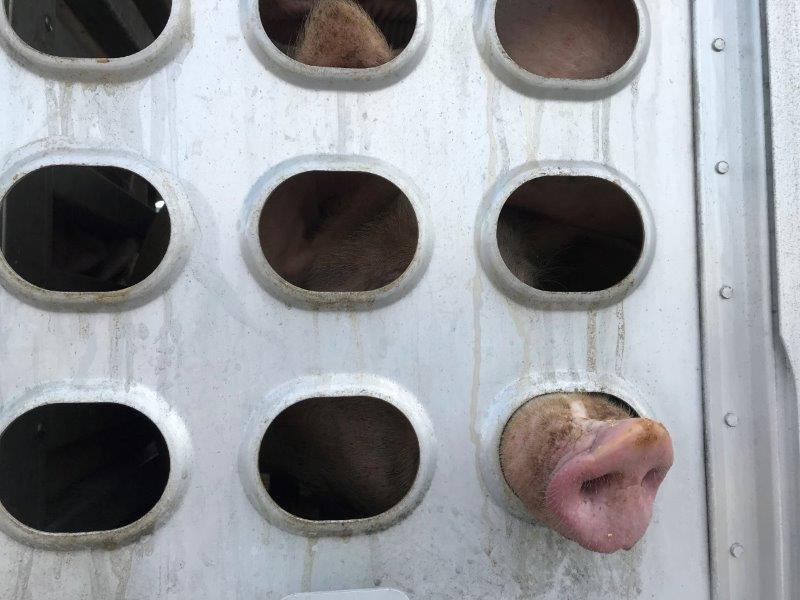 The horse sale started. There were several thin horses going through the sale, however, all were within the legal limits of Pennsylvania law. One draft horse had a milk leg and horribly neglected feet. Prices were average and all the kill buyers were obtaining their share of horses.

Investigators walked outside to check for animals left in trailers. Inside the farrier barn, they noticed a group of horses in poor condition. An emaciated draft horse not fit for sale under PA law. An emaciated grey with a large bleeding sore on his point of buttock. Two thin and depressed looking Standardbreds. Observing from a distance, investigators noted that the auction veterinarian Dr. Holt, proceeded to check the animals. When approached by the investigators, he stated that these horses belonged to a horse “collector” named “Gene” and that this individual would gather up horses in bad condition and flip them. He added that these horses would not be going through the sale and that he had “told him the law”. 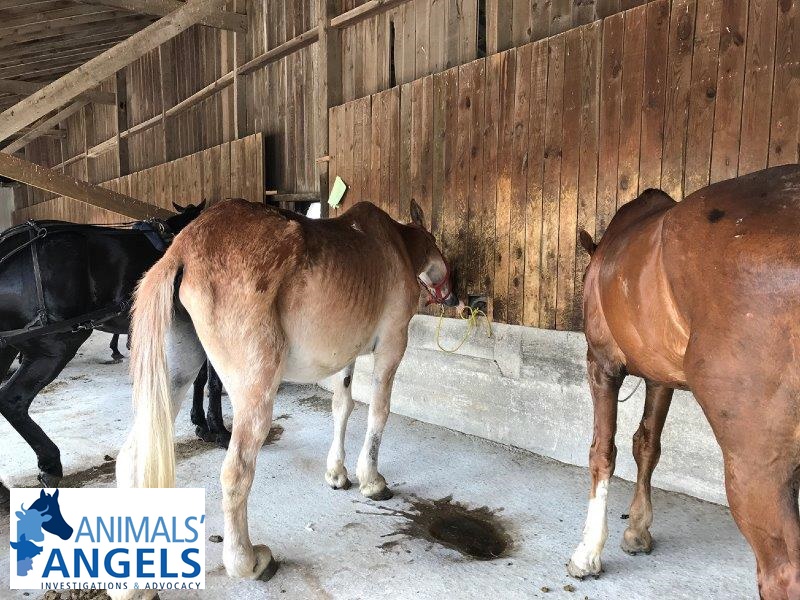 Investigators documented the condition of the animals when they were confronted by “Gene”. Claiming they were interested in purchasing the animals, Gene became friendlier and stated that these horses had been brought in by a kill buyer from Virginia and that he was flipping them to a rescue. He bragged about being well connected to over 40 rescues and how much money was to be made with this set-up. He elaborated that the “man from Virginia” did not like to deal with the rescue folks, that’s why he was being used as a middle-man. Suddenly, Gene’s phone rang, and the auction veterinarian Dr. Holt was on the other end. After listening to Holt for a while, a concerned looking Gene hung up the phone, called his transporter and urged him to come to the barn. “They have been seen, I need to get them out of here now…”, Gene told the person on the phone. Judging by his reaction, it is entirely possible that Holt informed Gene of our investigators’ presence, potentially putting their safety at risk. 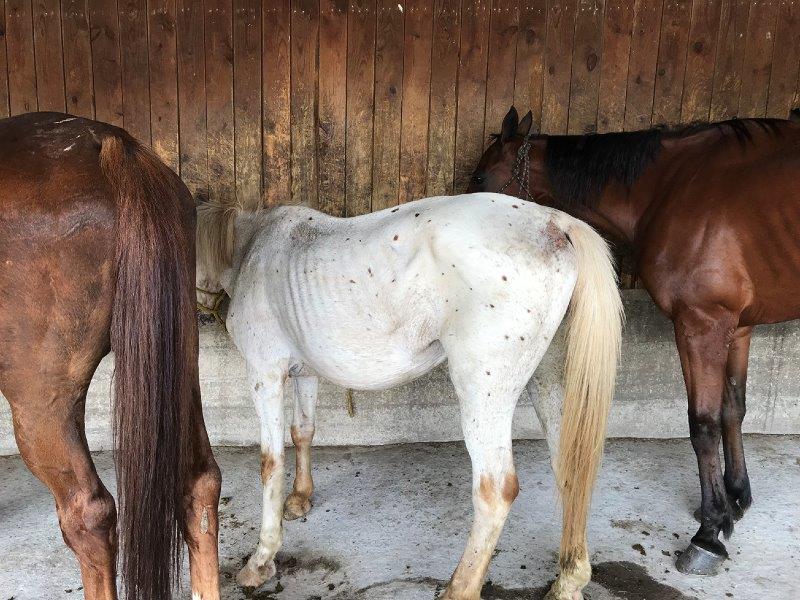 The investigators left the site and observed from a distance what was happening. Five minutes later, an older Dodge Ram with Pennsylvania tags pulling a white horse trailer parked and Gene proceeded to load the animals into the trailer. Investigators called New Holland Police to report what was going on and that there were potentially several PA laws being violated. (PA Anti Cruelty Law Title 18 Section 5511(d) / Diseased Animal Quarantine Law PA Code Title 7 §5.9) Unfortunately, the officer was not helpful at all and stated that he was not a veterinarian, didn’t know anything about the condition of a horse and that most likely everything was “ok” since the auction veterinarian had checked the horses. All information provided by the investigator fell on deaf ears and the officer declined to come to the sale barn. The horses were transported off the property, most likely to be delivered to one of Gene’s rescue contacts.

In the meantime, the horse sale had ended and all the kill buyer trucks were backing up to the loading ramps. Brian Moore was the first one to load at 13:46pm, followed by Cedar Ridge Farm at 2:00pm.

Animals’ Angels has reached out to the New Holland Chief of Police and requested a meeting to discuss the extremely poor behavior of one of his officers that day. With no humane officer available to monitor conditions at the sale barn, the New Holland police is tasked with the enforcement of PA animal protection laws. There is no excuse for the conduct that was witnessed on 6/18 and AA will make sure that this kind of poor response will not happen again.