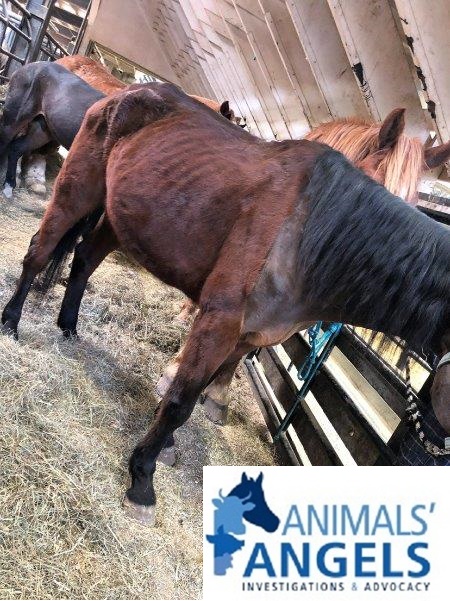 Investigators arrived at the premises at 7:30am and immediately found a dead sheep and a dead goat laying in the loading area of the sheep barn. Inside, all the pens were very crowded. In one of them, a dead buck was observed lying in the middle of a herd of goats. In another pen, a lone baby calf, maybe a few days old, had been left with a group of goats, which kicked and rammed him. In the same pen were several obviously sick goats, their nostrils clogged with snot, and labored breathing. One was in especially bad condition, he was down and heaving. Shortly thereafter, he stopped breathing and died. Another goat had a severe eye infection, the eye was watery and glazed over. Several goats and lambs had wounds on legs and feet, bloodied, presumably from being transported in an overcrowded trailer.

When investigators entered the horse stable, they saw a man whipping a horse hard in the eye with a leather rope. The horse reared and was whipped continuously across the face, and later could not open that eye when it was run through the auction. Looking at all the horses present, many were in poor and neglected condition:

Investigators noticed hip #163, a small Appaloosa pony, which was panicking and falling to the floor. He appeared to be colicking since he kept pawing and kicking at his stomach and was attempting to roll. However, he was tied and would just fall and thrash instead. He was soaked through with sweat and was significantly bloated. Investigators informed the auction veterinarian about the situation and after looking at the struggling animal, he stated, “sometimes horses just get tired or upset when a friend leaves” and left. Later, when the animal tried to lie down again, a worker untied him and re-tied him higher up so he couldn’t put his head down. He was clearly stressed, pacing back and forth and continued to paw and kick. 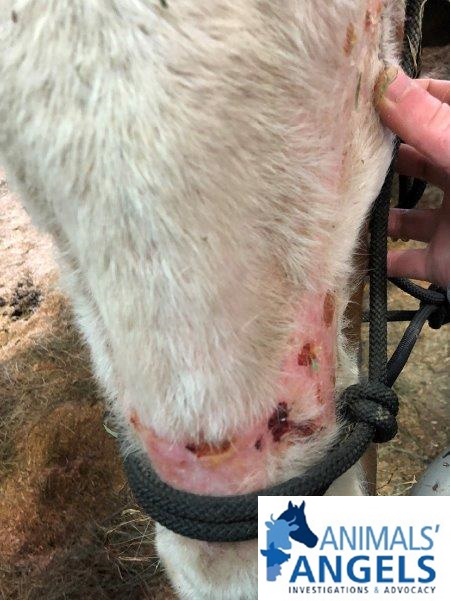 When the auction started, hip #101 fell while they were cantering him through the aisle. A different rider got on and immediately made him canter down the ring again. The horse was limping and was marked a no sale. A thin paint mare (BCS 3) was terribly infested with fleas, they were crawling all over her neck and mane. There were some areas the fleas were so thick that the skin was not visible.

An obviously neglected paint pony had horrible scabs on his face, which were probably a combination of severe halter rub and sunburn (he had a white face). He also had hairless areas on his back. A bay horse also had severe skin issues, he was covered in bald spots, scabby spots and hot spots. In one area, his skin had come off and it looked like there was a hole in his chest.

A thin, elderly mule was lying down in the aisle. A worker whipped him with the lead and eventually kicked him in the head to get him up and moved through the auction ring. A skittish and fearful chestnut was tied next to a 7-month-old mini pony. Workers stood by and watched uncaring as the horse tried to rear and then proceeded to kick the mini until he went down. Eventually, a worker took the minis lead and tied it one slot over, but the mini was still in kicking range. 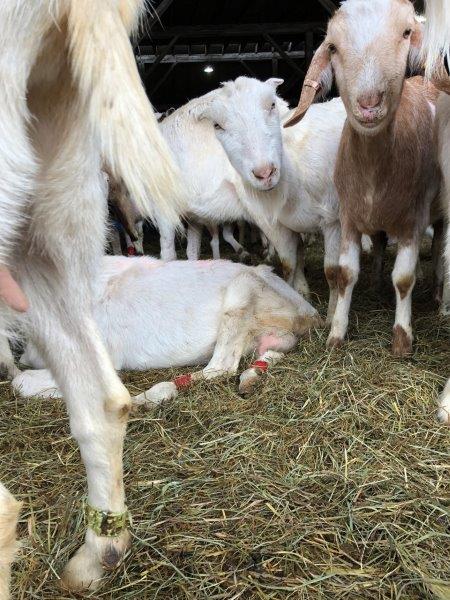 Again, many horses were sold as loose, mainly young quarter horses and paint mixes. They appeared completely unhandled. Two of them were very emaciated, and one had an injury on his back leg with a slight limp. Investigators noticed a worker using a prod to get a loose horse out of a trailer, which is completely unacceptable. The horse panicked, reared up and refused to move. Workers were consistently overusing prods, cows were falling and tripping over each other from being hit and being hit with the prod when they went down.

Overall, the conditions and the handling of the animals was again appalling. Animals’ Angels has documented all these occurrences and added them to our growing case file against New Holland Sales Stables.