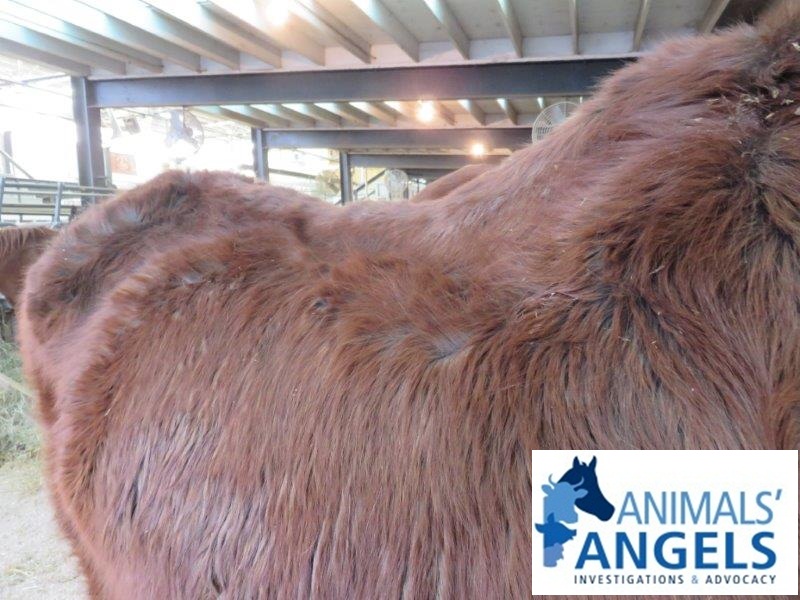 Investigators returned once again to the New Holland Auction. Upon arrival at 8:00 a.m., the temperatures were freezing at -2 degrees.  It was an extremely slow day due to the frigid temperatures and half of the spaces in the horse barn were empty.

Inside the horse barn investigators immediately noted an elderly mare with tag #827 who was quite emaciated and was having difficulty eating. Despite her obvious distress, she was very friendly when approached.  There was a chestnut with tag #844 whose ribs were showing that had clear harness marks. Also observed was a pair of Belgian Drafts with very overgrown hooves. 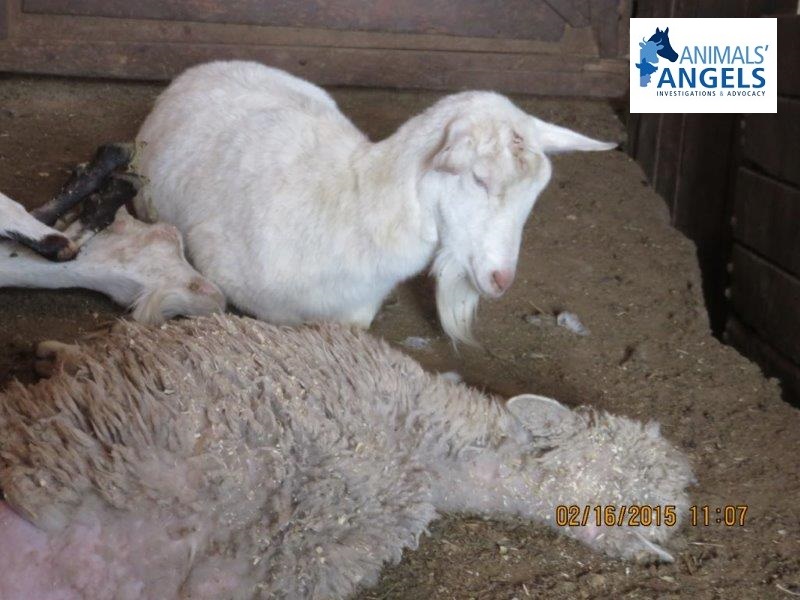 At 9:00 a.m., at the sheep and goat barn, several dead animals were found. On one of the loading ramps, investigators discovered a large dead pile with several discarded goats and sheep. Sadly, one of the sheep was still alive. It was in extremely bad condition, lying flat on its side and showing obvious signs of hypothermia. Shortly thereafter, investigators noted that there was also a goat on the dead pile still alive, something was very wrong with its legs and it was unable to rise.

After documenting the condition of these two animals, investigators called the Lancaster County SPCA Humane Officer to report the situation.  Investigators then waited on site to see what, if any, action the auction personnel would take to end the suffering of these two poor animals thrown out like trash.

While one investigator continued to observe the sheep and goat, the other investigator attended the horse sale which started at 10:15 a.m.  Kill byers Brian Moore and Bruce Rotz were present as well as horse traders C. Fisher, Charlie DeHart, Chucky Beam, and Cranbury Sales Stables.  The lack of horses available due to the severely inclement weather drove the prices up somewhat as there was a lot of competition amongst the kill buyers, traders and broker programs. 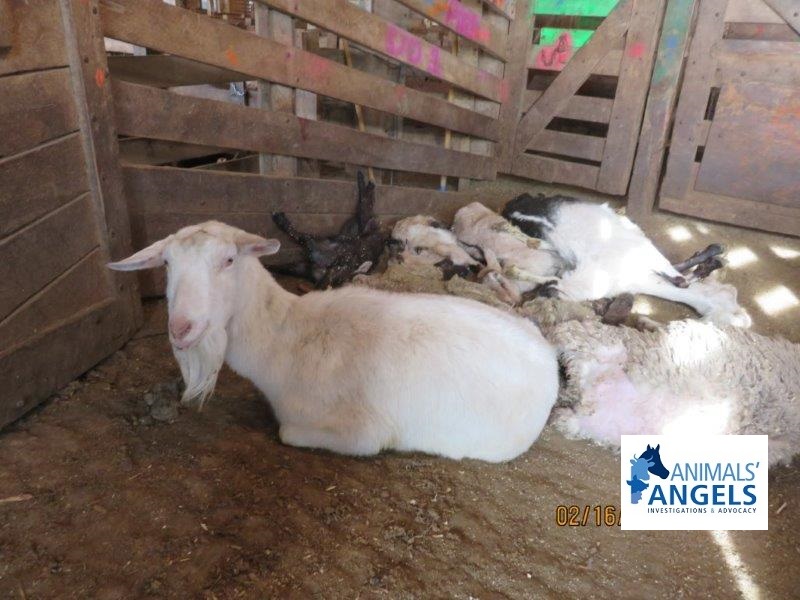 Some of the “fleshy” horses and riding horses went for as much as $950 while the thin horses went for between $245-$345. The majority of horses were sold “as is” with signed transfer papers.  One elderly mare was declared not fit for sale by the auction vet and was given to a rescue.

At 11:34 a.m., a white semi with a double deck trailer of Dey Farm backed up to the loading ramp of the sheep stable where the debilitated animals at the dead pile were located.  Our investigator was shocked to see that the driver exited the truck with an electric prod and together with someone who appeared to be an auction employee started moving animals straight across the area. 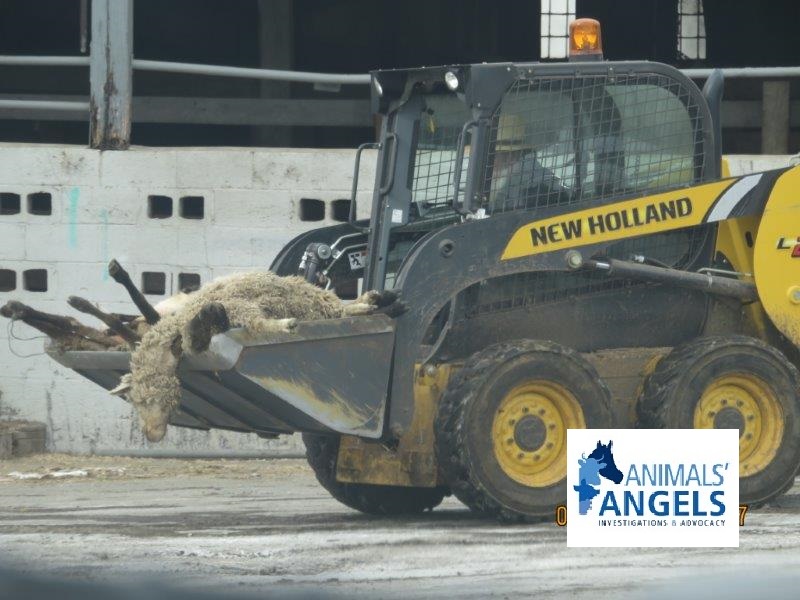 Although the investigator could not get a clear view of the activity, there was an enormous amount of noise and commotion.  Thirty minutes later, the driver closed the back of his trailer and drove away.  Upon return to the dead pile to check on the animals, our investigator noted that the goat had been moved to the side, but other than that, nothing had changed.  The sheep was also still alive.

At 12:30 p.m., investigators could no longer bear to watch the animals suffering and they decided to call New Holland Police for help.  Twenty minutes later, an officer arrived.  The investigators reported what had been observed and for how long the animals had been left next the dead pile. Investigators led police to the dead pile and showed them the sheep and goat who were still alive at this time. 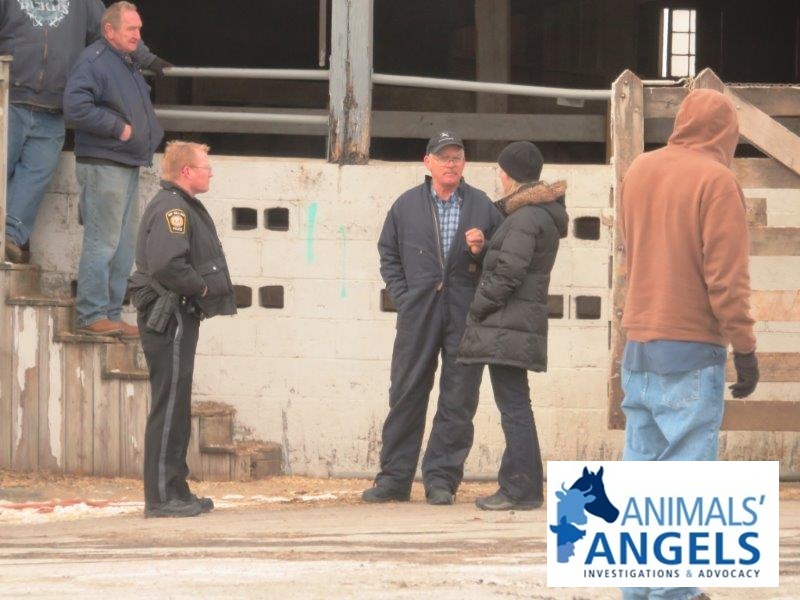 In 2007, the auction was convicted of animal cruelty based on the evidence we provided.  It was an almost identical case wherein three sheep were left dying for hours without intervention or assistance by auction personnel. After the conviction, Animals’ Angels met with the auction owner and the auction veterinarian and were advised that all employees were instructed to specifically look for dying animals so that they could be euthanized immediately.

Obviously New Holland lacks accountability in many aspects of its practices which is why we will continue to monitor this sale.