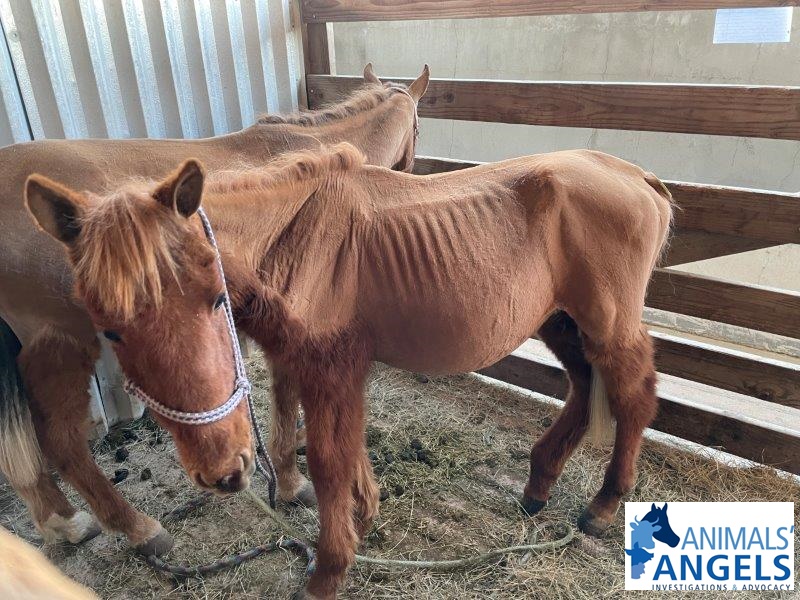 When Animals’ Angels investigators arrived at Murphy’s Horse Auction in Mira Loma, California in December 2021, they handed over a $10 parking fee and made their way past popcorn and hot dog stands, noting that the large, beer-drinking crowd seemed to be in a festive mood.

But while the lively atmosphere gave off plenty of family-fun-park vibes near the entrance, the appalling condition of the sick and neglected animals our team observed back in the holding pens was anything but entertaining and was described by one investigator as “absolutely heartbreaking.”

The Facts Behind the Façade

Animals’ Angels investigators first visited the Murphy Family’s horse sale in Mira Loma back in 2015. The auction, one of the few horse sales still operating in California, had initially attracted our attention due to its reputation for catering to several large-scale horse traders and suspected kill buyers.

More recently, the Murphys added a horse auction in Buckeye, Arizona to their portfolio, quickly growing the second operation through the same tactics used at the California sale.

While the family’s patriarch Mike Murphy acts as auctioneer, his son Shawn runs the online business, posting horses for sale on a popular Facebook page prior to each auction and attempting to portray the auction as a family-friendly event where beautiful ranch horses, riding horses, and kid’s horses are sold.

Unfortunately, based on the findings of multiple investigations carried out by our team, much of the Murphy Family’s profits are actually made by selling sick, injured, and emaciated animals to horse traders and suspected kill buyers at both their California and Arizona auctions.

Behind the Curtain at the California Auction 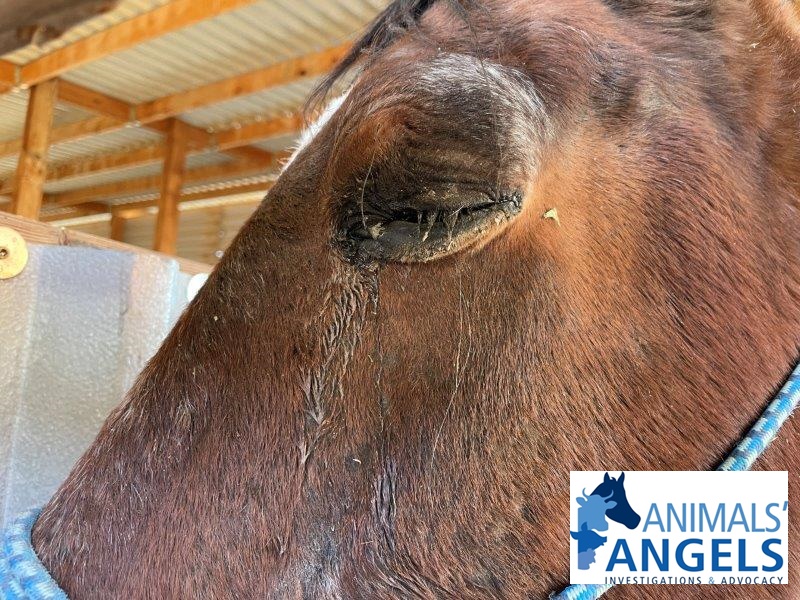 Our most recent investigation into the Murphy Livestock Auction in California highlighted the stark contrast between the cheerful atmosphere outside the pens, and the miserable conditions inside. As the scent of popcorn and the sound of laughter filled the air, Animals’ Angels investigators were appalled to see the pitiful condition of the horses trapped in the holding pens.

Several horses were emaciated and exhibited obvious signs of a strangles infection, along with hooves that showed evidence of blatant, prolonged neglect. A battered, ten-year-old grey gelding was bleeding from a neck wound most likely caused by a saddle that had been left on for far too long. The same poor horse was covered in scars, and his hooves were overgrown and had curled up due to lack of trimming or even the most basic care.

It was heartbreaking to see the poor animal approach one of the investigators in a friendly way and nibble gently on their hand, still hoping for a show of affection despite all the hardships he appeared to have endured during his innocent life.

And it was truly painful to watch as a horse with a closed, infected eye continued to rub his eye on the pen railing again and again in a futile attempt to find relief from his suffering. 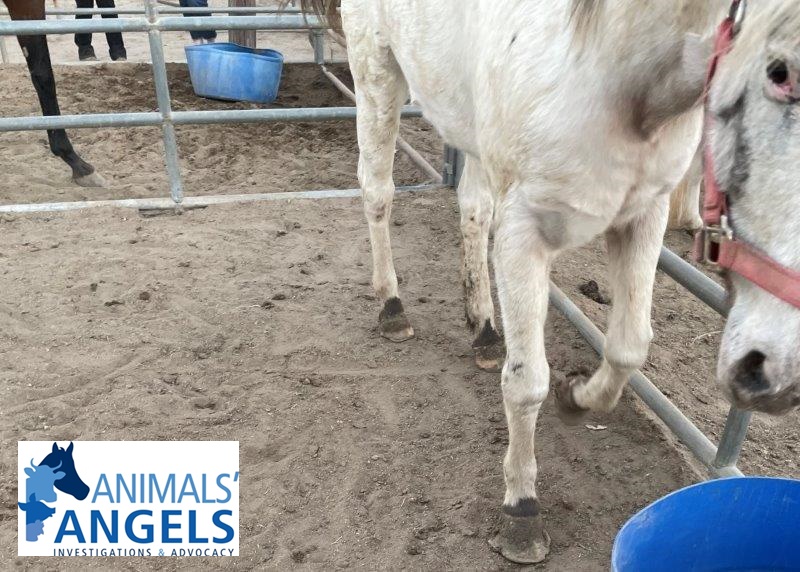 When the auction finally started just before 9:00 P.M., there were 51 horses tagged for sale in the pen area, where several signs had been posted stating that the shipment of any horse to slaughter is considered a crime in the state of California.

Those signs didn’t stop California horse traders and suspected kill buyers David and Bubba Misner from attending the auction. While Bubba stayed inside the ring during the bidding, David Misner took up a bidding position outside the sliding door as if he didn’t want to be seen.

Several times the auctioneer called out that one of the horses had been sold “to outside” and stopped the bidding. Misner and his son capped their bids at $500.00 as they bought the battered grey gelding, a toothless Paso Fino, and a 17-year-old standardbred mare before the sale ended well past midnight.

The Abuse and Neglect Continues in Arizona

In addition to our investigation into the California auction, AA investigators went undercover to the Murphy Family’s Arizona auction twice, most recently in February 2022. 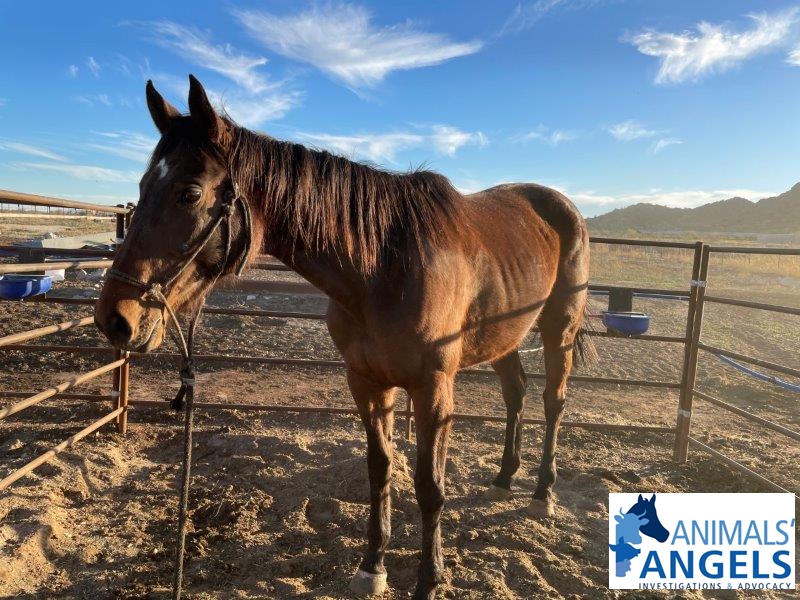 During this visit our investigators were dismayed to see the truck and trailer of large-scale Nevada kill buyer Ole Olsen, who does business under the name Meadow Valley Ranch and who is known for supplying horses to Bouvry Exports & Dennis Chavez.

Bubba Misner was also in attendance, buying several well-trained riding horses for over $1000 each. He also paid $250 for a visibly terrified, black yearling stud colt with burrs in his mane and forelock.

Inside a small, covered pen, our investigators found two very young and emaciated yearlings, who were also visibly frightened as they huddled together trying to comfort each other.

While the main pen area seemed to be new and well-maintained, with the horses kept in individual stalls, the outdoor pens in the back offered no shelter for the “problem horses” kept within. 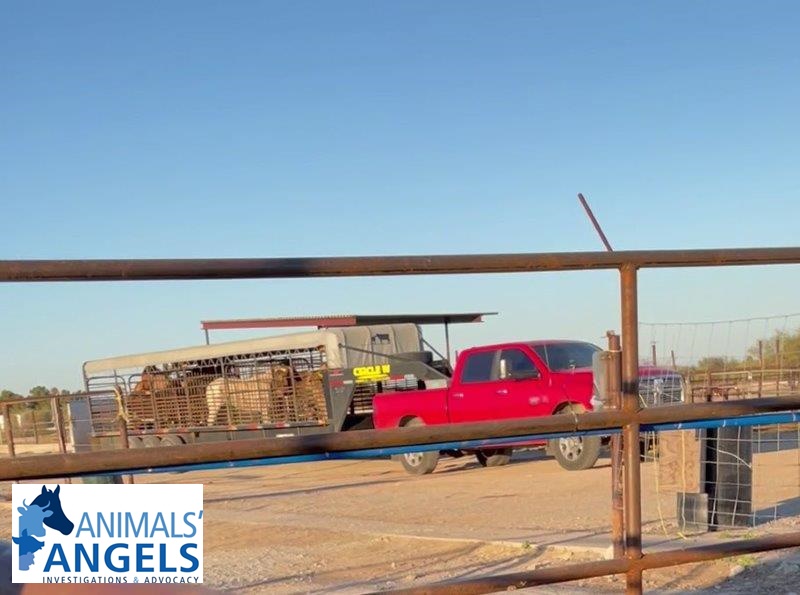 Animals’ Angels investigators observed a group of horses seemingly brought to the auction by the same seller, all of which looked worn-out and demonstrated clear signs of strangles, with runny noses and yellowish discharge coming from their eyes. There was a fresh cut on one horse’s left front leg (possibly the result of a transport injury), and several of the horses were emaciated with their ribs clearly showing.

Our investigators became suspicious about the fate of the horses within a pen all the way in the back after an auction worker assessed several loaded horse trailers and selected only certain horses to be unloaded into that particular pen. Subsequently, the selected horses were not auctioned off, and we suspect they may have been kept for a different purpose or specific buyer.

Although we don’t have enough evidence yet to draw a definite conclusion, we fear those horses may have been saved for a kill buyer with the intention to ship them straight to slaughter. 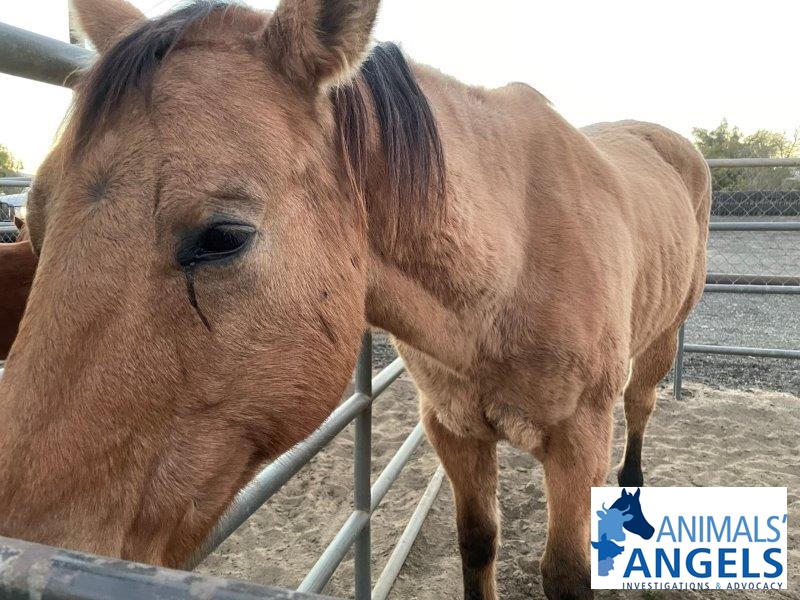 While the Murphy Family attempts to portray their auctions in California and Arizona as respectable, family-friendly events, the pitiful condition of many of the horses our investigators witnessed tells a very different story.

The fact is, both auctions are frequented by known and well-established horse traders and kill buyers, and the auction in Arizona has the potential to become a favorite of the kill buyers since it is conveniently located by the main transport routes to the Mexican border.

Based on the disturbing findings of our investigations, Animals’ Angels is committed to monitoring both auctions on a consistent basis so that abuse and violations can be reported to the proper authorities and exposed to the unaware public.