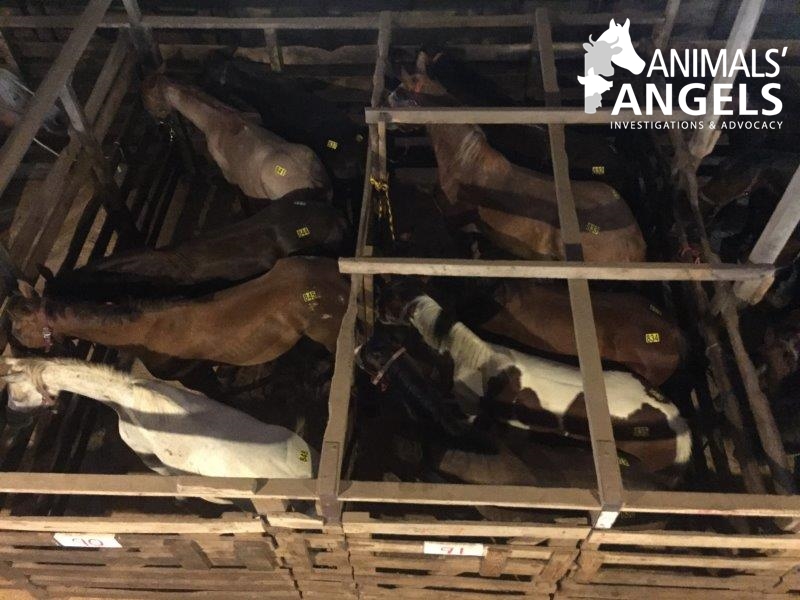 Investigators arrived at the Middleburg Horse Auction at 9:45 a.m. on 6/23/16.  It was a very hot day for the sale with temperatures at 90 degrees.

After inspecting the area, investigators noted that there were approximately 58 horses and 12 minis in the pens.  Only the riding horse pen had access to hay and water. The loose pens and the single horse pens for buggy horses had none available whatsoever.

As is usually the case with this auction, the loose horse pens were severely overcrowded, with horses packed in like sardines.  There were 5 to 7 horses tied next to each other, unable to move. There were several aggressive horses among them kicking and biting the other animals. 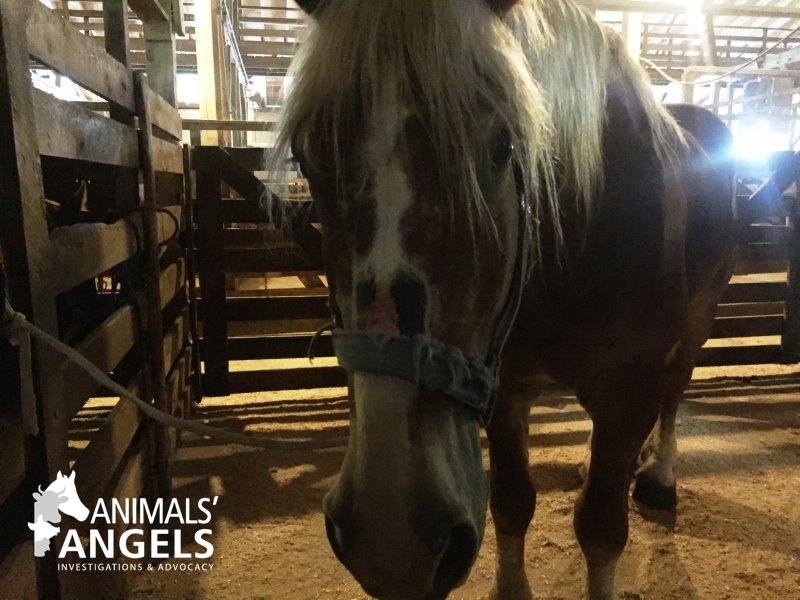 Investigators observed a Belgian Draft with tag #812 who had neglected, overgrown feet and a large, painful looking halter sore across the face. Another horse, a Swayback Morgan cross also presented with very bad feet and an older Standardbred had difficulty walking.

There were several extremely thin Standardbreds with hip bones and spines clearly visible.

The sale started late at 11:32 a.m. and ended at 12:45 p.m.  All of the Pennsylvania kill buyers were in attendance including Bruce Rotz and Brian Moore. 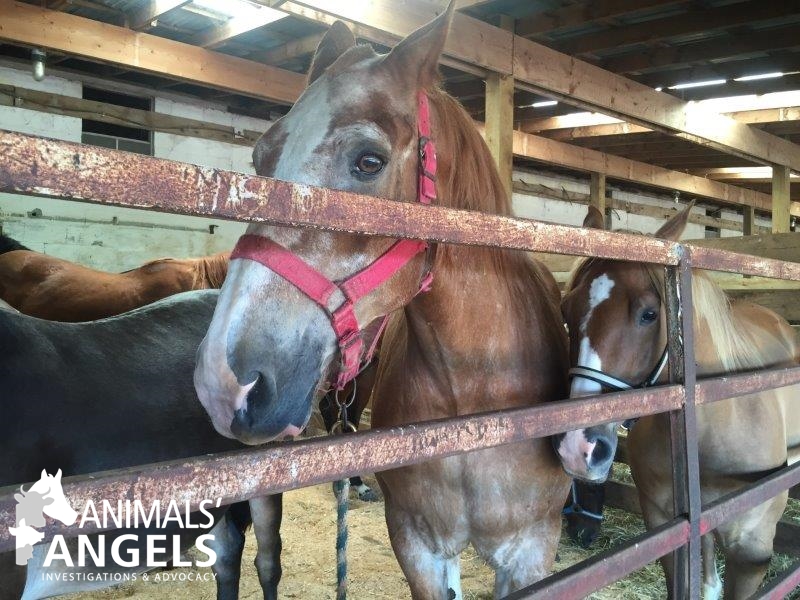 Another kill buyer, Charlie Fisher, who made the news in 2014 for severely neglecting and starving multiple horses in his care was also in attendance trying to sell some ponies. Fisher was ultimately found guilty on nine counts of animal cruelty in the 2014 case which resulted in a $900 fine as well as court costs and restitution in the amount $1,390, payable to the Lancaster County SPCA.  Two horses died in that incident and one was left in extremely poor condition.

The Amish riding horses sold first, selling for well over $1,000.  The other horses sold for anywhere from $350 for the thin horses up to $800 for the heftier Drafts and Quarter horses. 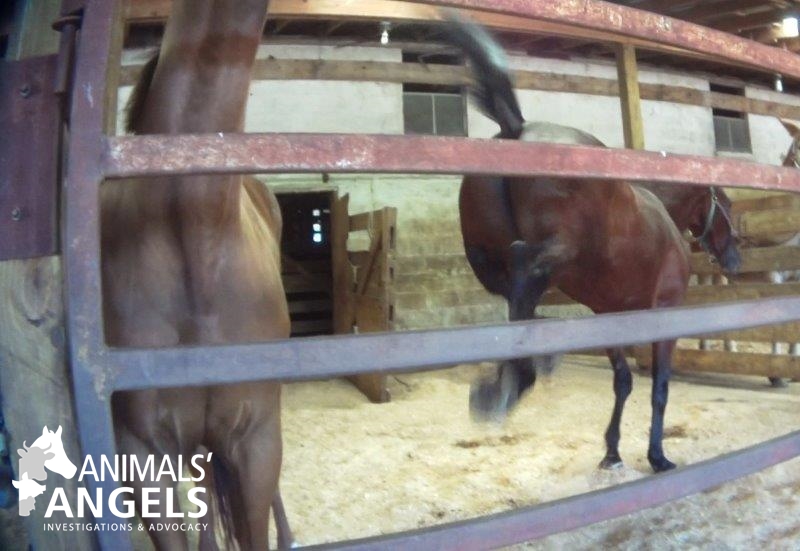 Bruce Rotz purchased a gorgeous, sound riding horse for $800, likely to be resold through his broker program. Rotz also purchased a horse that was announced as “aggressive” for $100, joking “We will see if she kicks where she’s going…”

Both Rotz and Moore had brought their semis and single deck trailers to the sale and were battling fiercely against each other to secure their loads. Investigators had noted that Rotz had already backed his trailer up to the loading ramp prior to the sale. 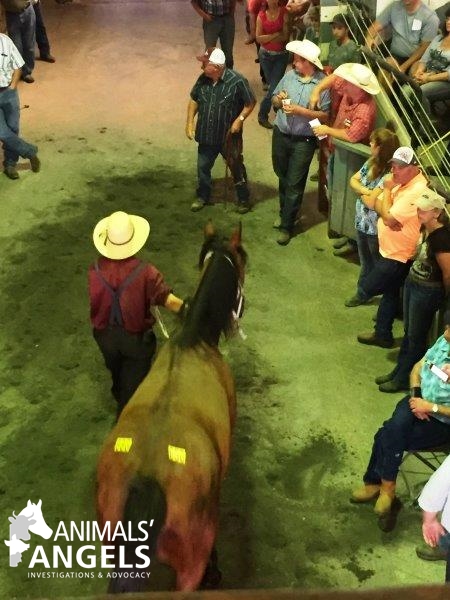 Both sides of Rotz's trailer were almost completely boarded up with plywood, leaving just the three top levels open, making it impossible to check the condition of the horses inside the trailer while en route.

After the sale, Rotz’s and Moore’s horses were divided up into two large sections in the pen, awaiting loading. The aggressive horse purchased by Rotz was stirring up the other horses in the pen and causing obvious anxiety among them, even kicking several of the horses with full force. One smaller mare, who was kicked in her side, fell down heavily and was in obvious distress afterwards.

One can only image what the presence of such an aggressive horse will do inside a trailer packed full with 30 other horses heading to Canada for slaughter. 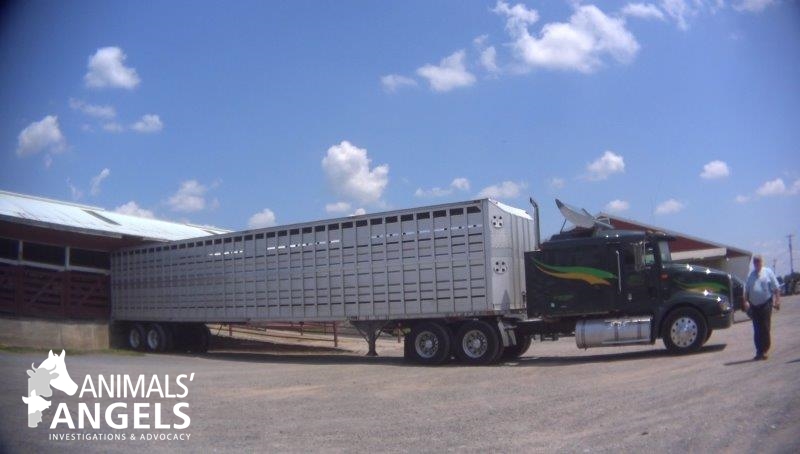 AA will continue to monitor this sale since it is one of Pennsylvania’s main slaughter auctions and as always, we will continue to report violations to the appropriate enforcement agencies.