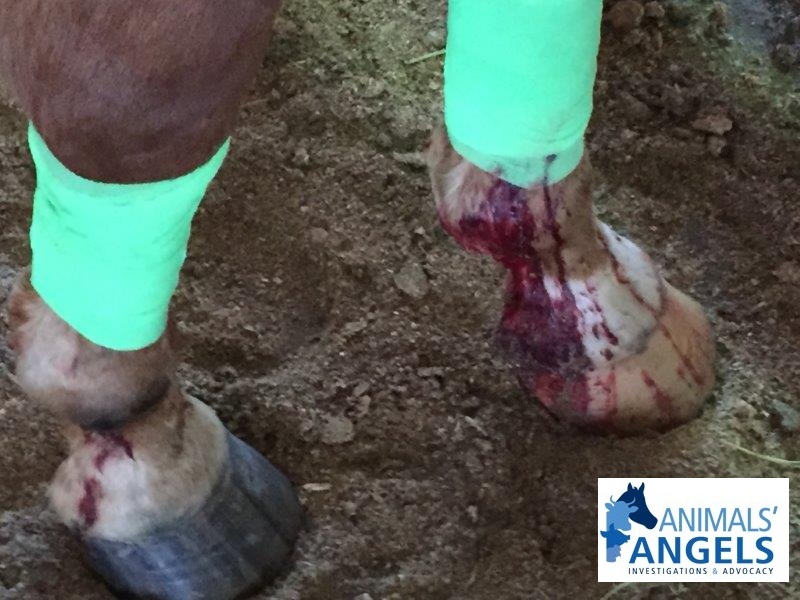 It was an extremely frigid day for the sale with the temperature being just 11 degrees. When investigators arrived at the auction at 9:45 a.m., Bruce Rotz’ black semi with green stripes was already parked next to the loading ramp. Fisher Livestock was already present as well. The auction appeared to be having a slow day – there were not as many horses as usual.  There were only approximately 70 horses and a pen of minis.  This was likely due to the severely inclement weather.

Investigators noted several very thin horses among those that were there and a grey Percheron gelding with Tag #973 was quite emaciated with his spin and hips clearly visible. A brown Standardbred gelding had a hole under his jaw bone indicating a potential strangles infection.

A 2009 Quarter Horse gelding with tag #279 was thin with hips showing and had both front legs freshly injured.  They were bandaged, but there was still a lot of fresh blood visible. He also had a smaller injury on his hip.  Even with his injuries, he was very sweet and friendly. 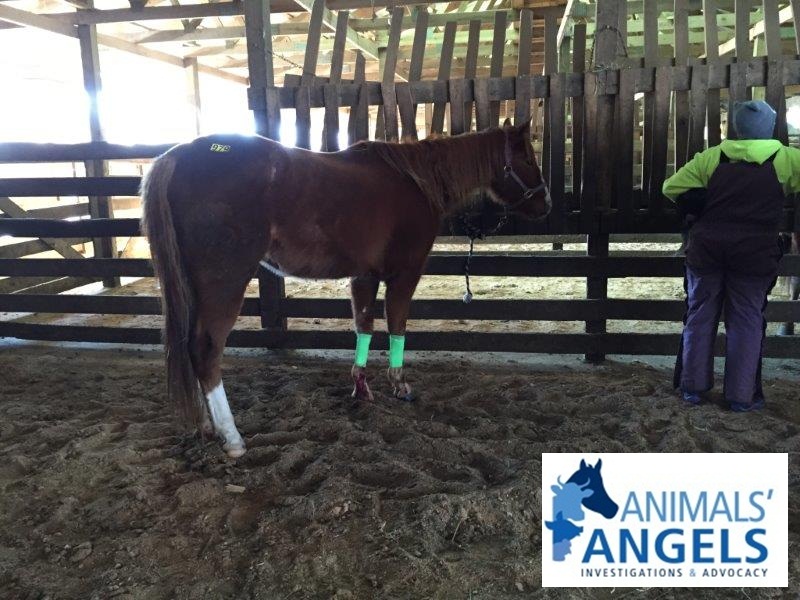 Several loose horses, some of them studs, were brought with filthy coats and burrs covering their manes. They appeared to have never been handled and were very nervous. There was absolutely no light in the barn at this time making it almost completely impossible to see any details on the horses packed in the “as-is” pens.  Investigators observed horses tied to the pen railing to keep them from moving and there was no access to food or water. It was noted that studs were put in small, individual pens with no room whatsoever to move.

The sale started at 12:00pm with Amish driving horses, most of them being brought in by a trader named Rubin.  Not surprisingly, the prices were higher than for the slaughter prospects, with these horses selling for between $770 and $1900.

“As-is” horses sold at a very fast pace.  In the audience was Rotz Sr., with DeHart holding his purchase card and writing down the purchases for Rotz. There was a Maryland trader present on behalf of Moore.  Also in the audience was Mel Hoover, the owner/auctioneer of Hoover Stables and Sale Barn.

An emaciated gelding with tag #973 went through the ring and sold for $10 to buyer #500 who has been observed at past sales buying the lame, sick and emaciated horses. The Quarter Horse with the injured and bleeding front legs (“he just got banged up in the trailer…” according to the auctioneer) sold to Rotz for $350. 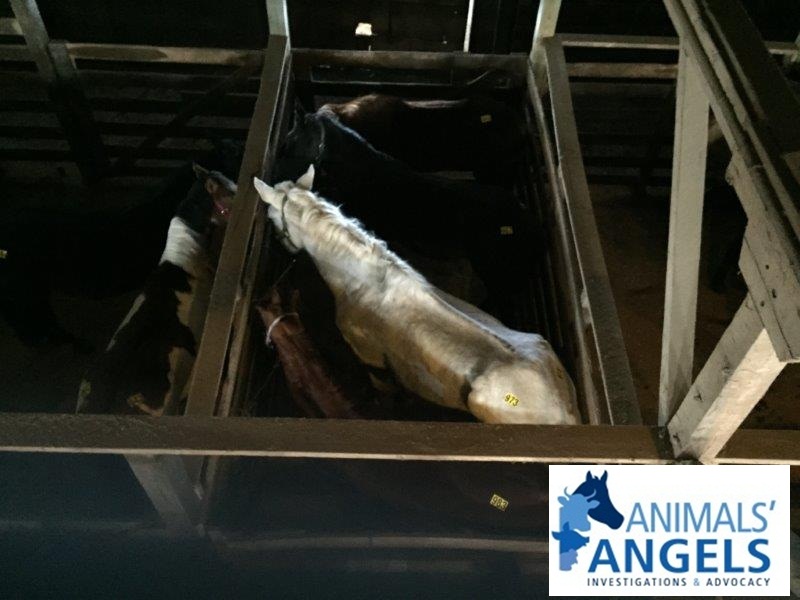 Both Rotz and Moor were bidding on the loose studs. One of them was so wild, auction personnel sold it straight out of the pen because he could not be run through the ring – he sold to Rotz for $75.  One can only imagine how a horse like that will behave inside of a packed trailer with other horses.

Of particular interest – Rotz bid on almost all of the riding horses that were priced under $900, which he usually does not buy, paying $750 to $900 for them, which is above “meat price.” In all probability he plans to re-sell these horses.  For the regular slaughter horses, Rotz paid between $250 and $550.

The sale ended at 1:15 p.m.  Investigators observed that Rotz appeared to be in big hurry and had already loaded while the sale was still ongoing. His semi left before the sale was over to return to Shippensburg, likely to be available for additional loads to be picked up from Tennessee.