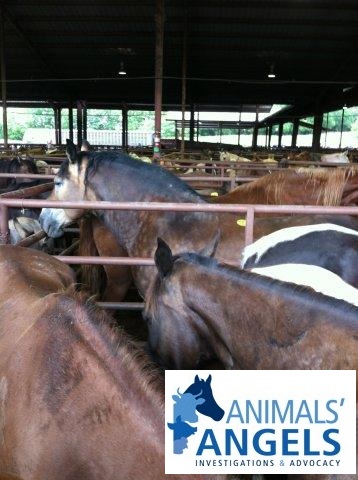 The Knoxville Livestock Center in Mascot, TN, holds a monthly horse sale every 2nd Sat of the month at 4:00pm.  When investigators arrived for the July 14th sale, they immediately noticed pens so packed full of horses that there was a lot of fighting and kicking.  Investigators counted more than 400 horses in the vast pen area.  Typical to other large sales, riding horses were housed much better than the “slaughter prospects”.  Even though other empty pens were available, the horses in the kill pens were crammed in tightly and, for at least 9 hours, had no access to water.  The temperature soared at 90 degrees; it was hot and very humid.  Only one fan was present and it faced away from the pens, rendering it completely useless for the horses.

The condition in which some of the slaughter-bond horses arrived , was very poor. Several were emaciated with fresh injuries.  Horses particularly noted were a grey mare with a blood on her muzzle, a grey mare with a cut on her hip, and a bay gelding with open wounds/sores around his nostrils.  Quietly standing amid one of the crowded pens, was a skeleton of a grey mare.  She appeared tired and weak and held her head low. While documenting, investigators also found 2 terrified young foals in one of the pens.  One foal was so young (approximately 4 months), that it desperately tried to nurse on the foal next to it. 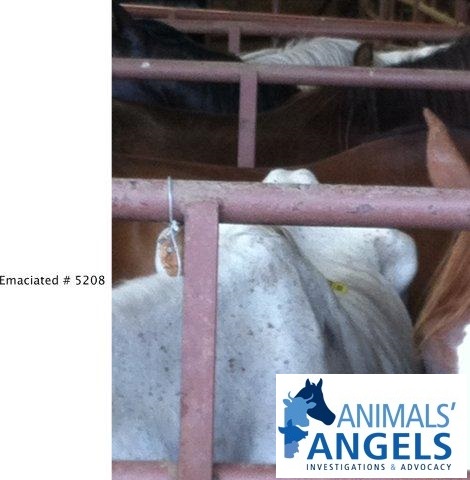 As the sale started, workers began moving the horses closer to the sales ring.  While the riding horses were handled in a calm fashion, the handling of the slaughter horses was very different.  Gates were being slammed on horses’ heads and hind legs, with horses slipping and falling more than once.  A female worker used a leather whip to move the horses. Once the riding horses were sold, the scale was activated, and the weight of each horse was displayed as it moved through the ring.  The auctioneer announced that all horses marked with spray paint were “medicine free”.   Investigators watched as the bone-thin grey mare staggered through the auction ring.  Nobody, not even the slaughter buyers, wanted her.

In all, over 400 horses sold in about 6 hours, and the slaughter buyers all scored full loads. Investigators approached a middle aged pen worker inquiring about the fate, and ownership, of the emaciated grey mare.  Investigators were given excuses like, “The auction owner isn’t present, we won’t make a decision, the owner will pick her up”, “It is not the auction’s responsibility”, and so forth.  Moving through the excuses, investigators instructed the workers to provide the mare water at a minimum, which she eagerly drank.

Although the sale ended at 10:00pm, Rotz Livestock didn’t load until 1:15am.  Birdsong Farms loaded at 1:30am.  Sexton Horse & Mule Farms didn’t load while investigators were present, and the emaciated grey mare had not been picked up when investigators left at 2:30am.