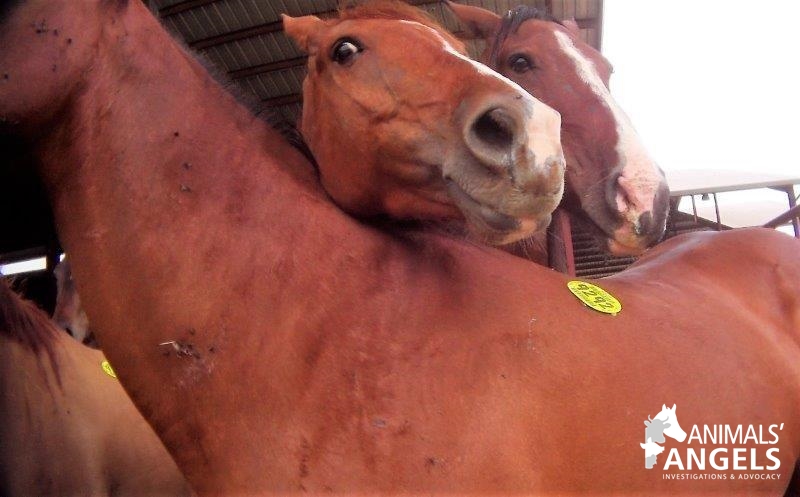 Animals’ Angels has been investigating this auction for several years. In fact, this sale is featured in an eye-opening documentary that AA will be releasing shortly. We recently returned to this location to once again check on conditions and the kill buyer presence at this sale.  The auction wasn’t as busy as usual, most likely due to it being Memorial Day weekend.

Walking through the loose pen area, investigators immediately noted that there were again a great number of emaciated horses present at the sale. 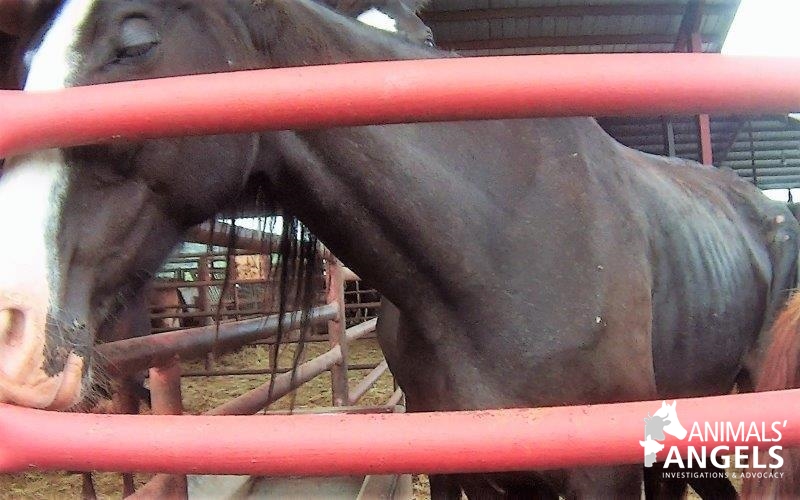 Many of them appeared unhandled and were dirt covered, their manes full of burs and their hooves overgrown. Obviously not accustomed to human interaction, they were extremely scared and stayed close to each other in the pen, apparently trying to comfort each other.

Also present were two emaciated TB’s with hip bones clearly showing and with bleeding sores where the skin was covering the hip bone. They held their heads low and appeared very tired. 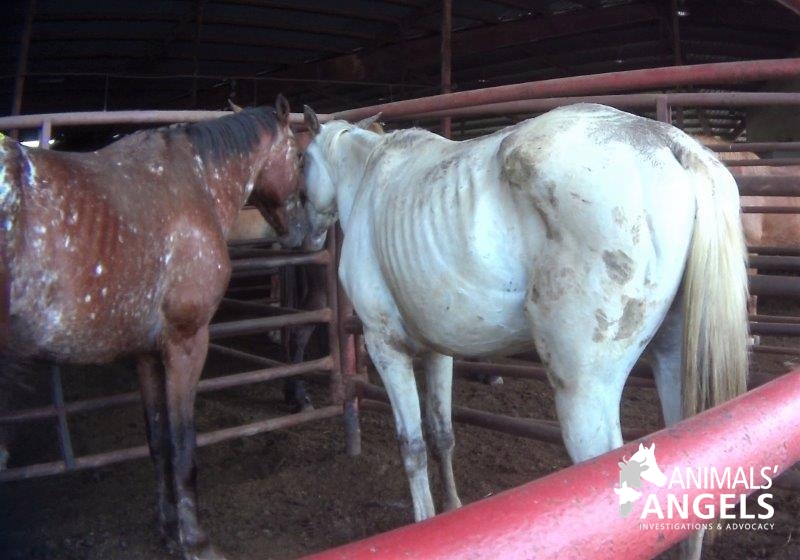 Several other horses had apparent strangles infections, with pus dripping from their nostrils. A bay mare had a fresh wound on the left side of her belly, which looked like a transport injury.

Investigators checked the loading area and saw a pickup truck with a long stock trailer arrive, loaded with a whole group of donkeys. They were quickly dumped into the loose pens and the owners left without so much as a second glance at the animals. 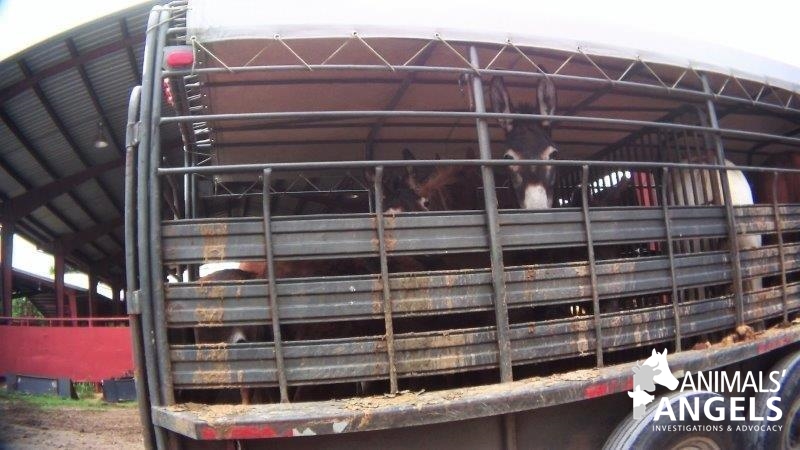 There was a veterinarian observed onsite drawing blood for Coggins tests.  Investigators noticed that during the process, the vet put a large metal clamp on one particular horse’s face -- the reason for which was unclear. The horse panicked and reared up, furiously shaking his head trying to rid himself of the offending object. Those in the area laughed and immediately made jokes at the expense of this poor animal who was obviously quite frightened. 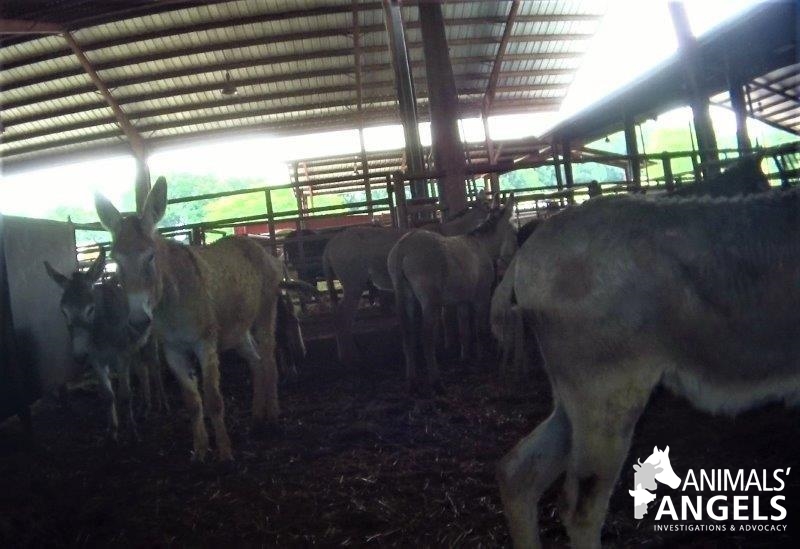 It’s possible the clamp was a “twitch,” in which case, it was perhaps misused as it had the complete opposite effect intended by the use of a twitch; it did not calm the horse, rather, it sent the horse into immediate panic mode.  Use of a twitch is considered a controversial restraint method by some, even when used correctly, and misuse or incorrect placement can cause pain and even permanent damage.

At 3:00 p.m. the red semi and single deck trailer of R & R Livestock was seen arriving and it immediately backed up to the loading ramp. 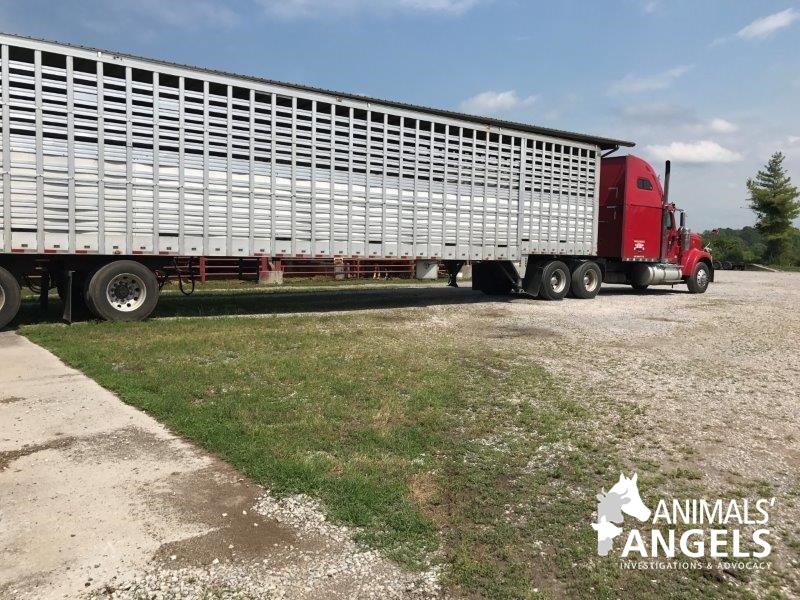 This is the first time R & R Livestock, operated by Randy Ray, was spotted in Knoxville since he usually buys horses at Smith Grove in Kentucky. R & R Livestock has a history of buying horses for Texas kill buyer Mike McBarron.

The sale started with riding horses at 4:00 p.m. Horse trader and kill buyer supplier, Jason Sexton, maintained a prominent presence inside the auction ring and in fact purchased a great many of the cheaper riding horses. 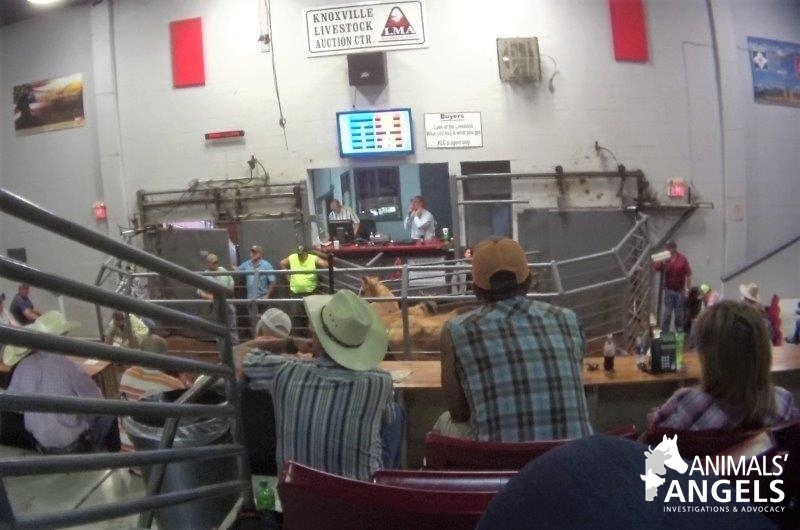 A total of 92 horses and 28 donkeys sold at a fast pace, with each of the animals inside the ring for mere seconds.  The unfortunate donkeys went to the kill buyers for next to nothing.

Animals’ Angels will continue to monitor this sale, notifying relevant authorities of all violations observed.