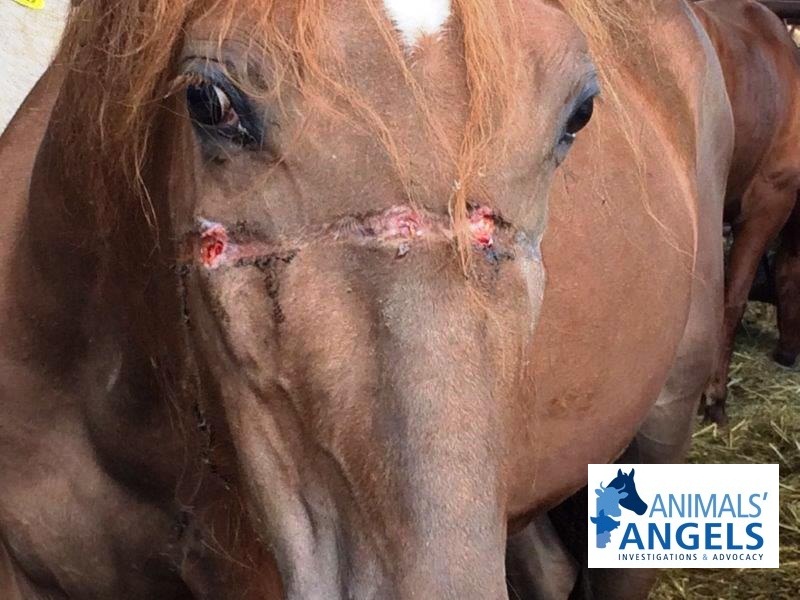 According to their own website, the auction is one of the largest livestock markets in the Southeast. The auction is “family owned and operated” and is held in a modern building that includes a restaurant, an office and auction ring. Adjacent to the building is a large, covered pen area with several loading ramps.

Animals’ Angels investigated this auction for the first time in 2012, after receiving multiple complaints from locals about the poor conditions and treatment of the horses. After our initial investigation in September 2012, Animals’ Angels informed the auction about our findings and suggested several improvements. Unfortunately, we did not receive any response and therefore a follow up investigation was scheduled.

In April 2013, our investigation documented horrific findings which we reported to the local and state authorities. Our footage could not have been more clear in showing the abusive treatment and in fact, an officer was present at the auction with our investigators to observe the conditions first hand. While it seemed at first that the auction would finally be held accountable for the cruel and inhumane treatment they had suffered upon the animals in their care, Tennessee authorities were less than responsive and declined to take any action whatsoever.

We returned to the Knoxville Auction for yet another follow up investigation.  If the pattern of abuse, neglect and mistreatment of the animals in their care has not improved, this auction needs to be held accountable for their actions. Likewise, the Tennessee authorities need to step up, do their jobs, and ensure that accountability takes place.

On October 11, 2014 our investigators arrived at the sale at 1:47 p.m.  The parking lot was already crowded. Sexton’s pick-up truck with stock trailer was parked in the back next to the ramp.  Riding horses were seen saddled in the front pens and loose horses were housed in the back pens.  The pens had water and some hay but were very muddy and manure covered.  The condition of the loose horses was very poor. Several were very thin with ribs clearly showing and many had overgrown hooves.  One black horse had a fresh, deep cut on her neck.

A chestnut gelding with tag #2955 had apparently had an ingrown halter removed which had left deep, bleeding, infected, open wounds all around the face.  He was extremely thin and his hooves were very bad, one especially was perhaps 9 inches. In addition to the bad hooves, he had bleeding sores on his feet.  He was very skittish and afraid, obviously not used to human contact. The other horses in the pen bullied him, biting him and not letting him close to the hay.  The auction should not have accepted this horse for the sale in this clear condition of neglect without notifying law enforcement.

A gray horse with tag #2781 was extremely skinny with many, many scars and a fresh wound on the forehead.  She was still friendly with our investigators though even with her apparently hurtful history.

There were several horses that appeared to have strangles with puss dripping from their nostrils. 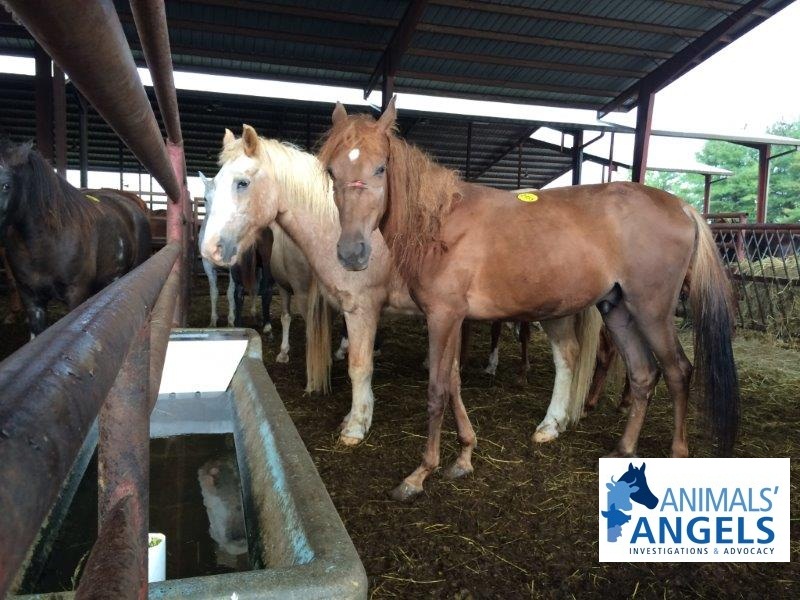 As investigators were looking over the loose horses, they noted a trailer from Foggy Bottom Farms, Decatur, TN arrive with many additional loose horses that appeared to be coming from outdoor neglect situations.  They were all skinny with filthy coats and manes knotted with burrs.

There were 140 loose horses for sale.  Slaughter buyers Jason Sexton and “a man from Georgia” likely John Birdsong.  Sexton bought the vast majority of horses, buying with multiple numbers and accounts, sometimes even bidding against himself.

At 6:40 p.m., the chestnut gelding with horrific halter sores and tag #2955 listed by seller #198 was moved through ring. His weight was only 640 lbs. He sold to buyer #1509 who appeared to be an acquaintance of Sexton. Investigators immediately followed the horse outside and saw that it was put in pen #73 with a small group of horses.

The sale ended at 7:30 p.m. The buyer of the chestnut gelding showed up and workers moved the horse with the rest of that group to the loading ramp on the other side of barn. At 7:50 p.m., it was dark and several trailers were loading and leaving.  Investigators were unable to find the horse after that. No large trucks had arrived and Sexton’s horses were still inside barn. Police never arrived. AA investigators waited, but left the auction 30 minutes later.

On the following Monday, Corporal Frankie Byrne called and wanted to follow up on incident. She requested all evidence and promised to look into it and find out where the horse went and what happened to it. AA provided her with a summary of the events along with all buyer/seller information and photographic documentation of the horse in question. Hopefully this time the authorities will follow through and file charges against the owner of the horse and the auction for the horrific neglect of the gelding. We will follow up accordingly.