As the world continued to battle the pandemic in the closing months of 2020, Animals’ Angels continued its mission to advocate for animals and expose abusers by conducting an extensive months-long undercover investigation into the Kalona Auction in Iowa.

Widely considered a dumping ground where the local Amish and Mennonite communities dispose of their used-up horses in exchange for new ones, the monthly Kalona horse sale is one of the largest providers of slaughter horses in the US, usually selling more slaughter horses than riding or work horses.

The auction caters to many of North America’s most notorious kill buyers, including Boots Stanley, Bouvry Exports, Scott Kurtenbach, George Baker and Keith Tongen. Each auction sells between 300 to 500 horses, with Stanley and Bouvry Exports buying the bulk of the slaughter horses.

The Kalona sale is also the only auction that uses a hydraulic gate to separate horses moving to the auction ring. As our investigators recently witnessed again firsthand, this is a cruel and chaotic process that inflicts unnecessary suffering on the innocent animals at the sale.

Months of Horror at the Kalona Sale 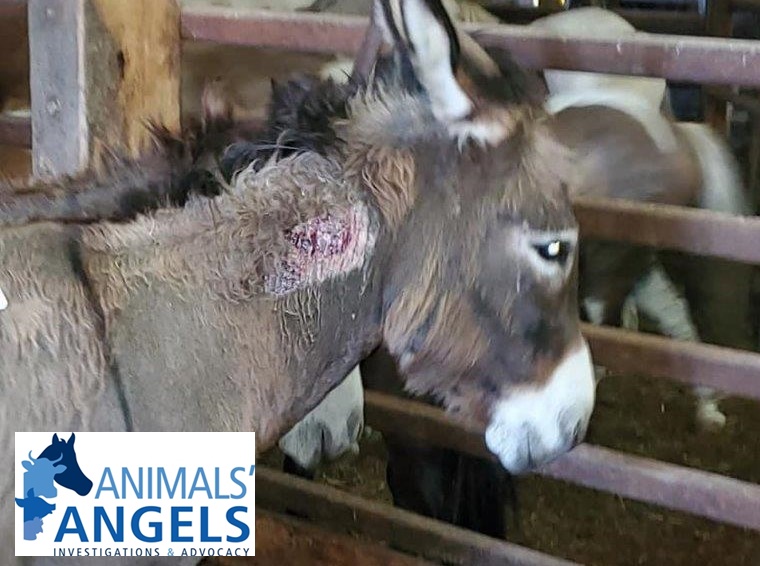 During Animals’ Angels recent investigation into the Kalona horse sale, our team observed auctions from August through November, and were horrified by the findings. A few of the heartbreaking observations are listed below:

In August, our team observed a draft mare go down multiple times in the pen, only to be forced back up again and again until she was sold, at which time the distressed animal went down yet again. At the same auction, investigators saw a horse covered with dozens of whip marks, and witnessed a horse being kicked in the face by another horse with full force in an agitated pen.

In September, kill buyer Boots Stanley paid $50 for a horse (tag #695) with severe lacerations on his face which appeared to have been caused by an ingrown halter being ripped off prior to the sale.

In October, Boots Stanley purchased a dappled grey draft horse who struggled through the auction ring due to a left leg that had swollen to three times its normal size. During the same sale, a Belgian draft horse died suddenly in the loose horse pen, indicating the horse had already been in dire condition when brought in, and a white donkey was mercilessly moved through the auction ring, even though the injured animal was unable to put any weight on his right foot.

In November, Stanley was once again buying blind, sick, and injured animals at the auction. These horses later appear on his online broker program pages for hundreds of dollars, even though he’d paid as little as $50 for many of the animals. This heartless exploitation is a prime example of why it’s never a good idea to buy a horse from a kill buyer. 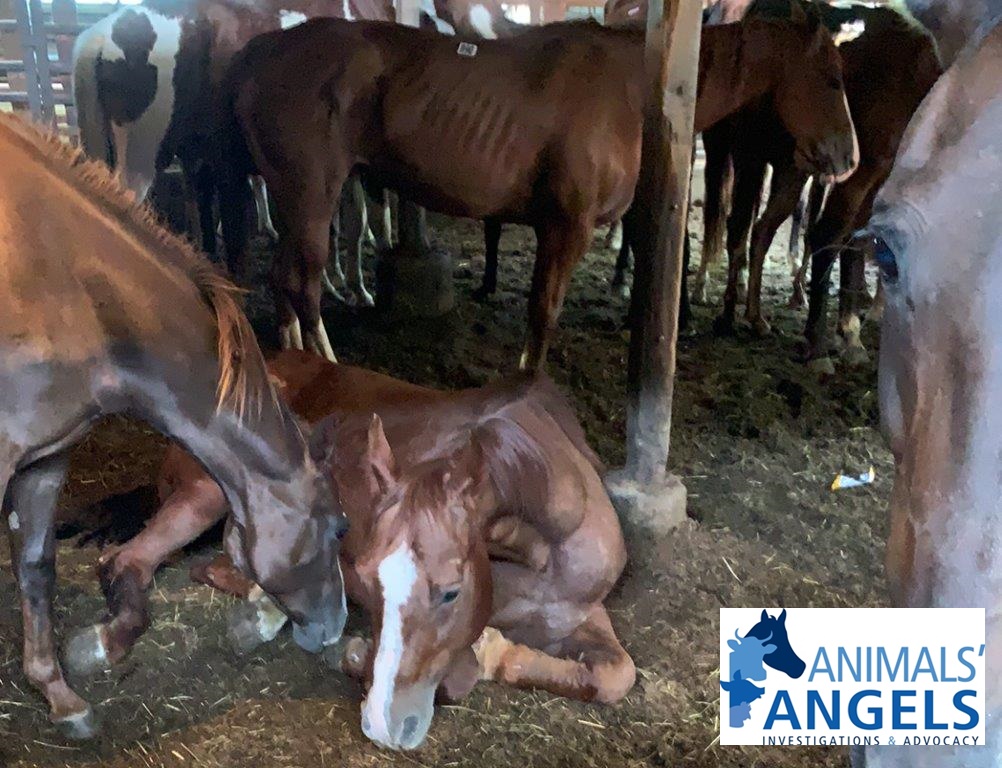 The auction used a heavy hydraulic gate to block the entrance of the auction ring. Terrified horses were forced through a narrow chute while the auction workers hit the panicked animals relentlessly on the face and sides. One worker even went so far to strike a horse across the face with his wooden cane.

Many horses were in extremely poor condition, including emaciated horses and horses with curled up or severely cracked hooves, rain rot, swollen legs, or fresh wounds from being kicked or injured during transport. Some of these horses were in such poor condition that it was obvious they should not have been accepted for sale.

Large draft horses were kept in pens with low ceilings, causing the poor animals to hit their heads on the overhead beams. On several occasions, stallions were put in the same pen with mares, causing unnecessary fighting and kicking.

The auction’s lack of diligence and care extended to the attendees as well. Despite a raging pandemic, the sale did not require or encourage the wearing of masks, thus putting the public at risk. 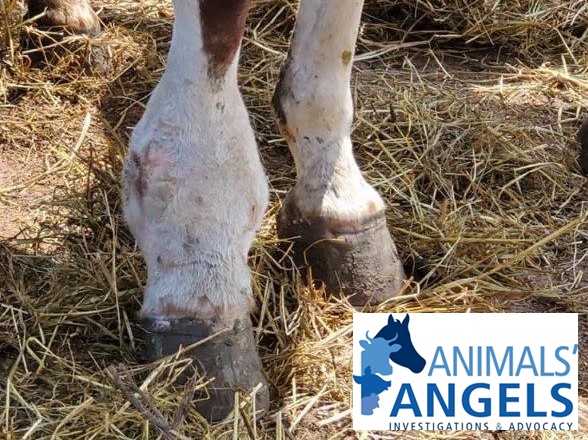 After witnessing the abuse and suffering of the horses at the auction, our team was appalled to see auction veterinarian Kim Van Driel, owner of New Hampton Vet Clinic, demonstrate a disturbing level of disregard for animal welfare, showing no sign of concern, care, or compassion for these sick and injured horses.

Van Driel was focused only on drawing blood for Coggins testing, while her husband Justin, who is a veterinary assistant at his wife’s clinic, could be overheard cursing and yelling at the horses while using a whip to move them around the pen.

Our investigation of the Kalona auction once again exposed the terrible treatment and conditions inflicted on the horses trusted to the auction’s care. It also served as a painful reminder why no one should ever purchase a horse from a kill buyer, since it only perpetuates the inhumane treatment of animals and enables the abuse to continue.

This unhappy truth is clearly demonstrated by the Stanley brothers, who have grown their business exponentially over the last decade by selling horses at inflated prices to well-meaning individuals who hope to save an animal from slaughter.

Unfortunately, the profit gained from these manipulative transactions has allowed the Stanley brothers to thrive. The cycle of abuse and slaughter will only end when the profits dry up and the kill-buyers can no longer make a living off the suffering of these poor animals.

As large scale kill buyers like Boots Stanley continue to load their slaughter trucks with innocent horses, Animals’ Angels will continue to expose the ugly truth about the Kalona auction and their kill buyer clientele.

We will work tirelessly to inform and warn unsuspecting buyers, making it our mission to discourage anyone from ever purchasing a horse from a kill buyer. Change can happen if we convince enough people to stop supporting the kill buyers and end their greedy reign of abuse and slaughter.