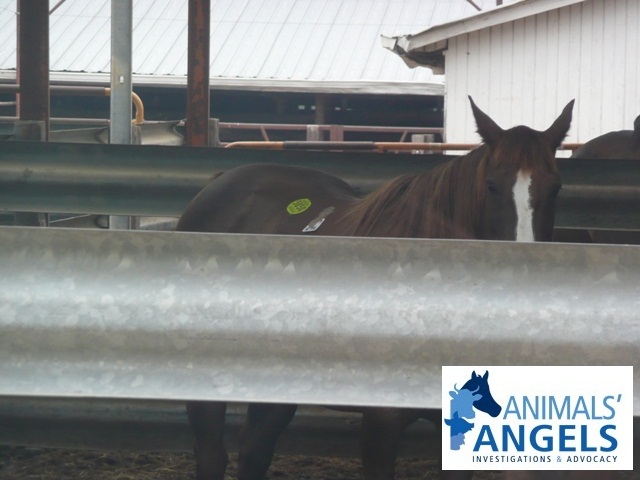 Investigators arrived at 08:45. The tack sale was already ongoing. There were not many horses in the pens at this time, however, there was a long line of pickup trucks with trailers waiting to unload. Horses kept arriving all morning until there were approximately 400 – 450 horses, mules and ponies, of which ½ to 2/3 were loose horses.

The loose horses, approximately 200 – 275, were kept in the outside pens located behind the auction barn. Blood was drawn for Coggins testing at the loading ramps. At the ramps a sign was posted stating that the fee for riding horses was $25.00/head to be paid by the seller, while for loose horses $10.00/head had to be paid by the buyer.

The outside pens contained hay and water with tarps covering the pens,  sheltering the animals from the sun. As the morning progressed, the outside pens became crowded and there was a lot of fighting among the horses, with biting and kicking. The inside pens did not contain hay or water. The inside pens that contained riding horses were well lit, however, in the rear of the building were several pens holding loose horses and these areas were dark with little or no light. Many of these horses were painted across their backs with the word “BROKE”. Investigators observed some thin horses, but did not find any emaciated horses; many horses suffered minor cuts, most likely transport injuries.

At 12:40, investigators found one horse (tag# 769) in an outside pen with a twisted left front leg. The leg was bent at a 45 degree angle with the hoof facing 90 degrees from the front. The injury appeared to be an old injury. The horse could not put weight on it and walked on 3 legs. The pen was crowded and the horse was jostled and had difficulty maintaining its balance from time to time. Nevertheless, this horse was sent through the sale and was purchased by an individual, who also purchased 3 other horses and a mule. A stock trailer with Illinois license plates arrived and unloaded a BLM horse (tag# 94). This horse went through the sale with the riding horses. It is not known who purchased the horse.

The riding horse sale started at 11:00 and ended at 15:05 in an auxiliary ring. The loose horse sale started at 14:15 and ended at 16:05. The sale took place in the main ring. A horse was sold approximately every 30 seconds. The handling of the horses up to just before the ring was satisfactory. The employees used sticks with flags and investigators did not observe anyone using excessive force on the horses.

Once the horses, reached the entrance to the ring they were sorted by a large hydraulic gate controlled by an employee on an elevated platform. Many horses became caught in the gate and the gate closed on their heads and bodies with full force. Sometimes as many as 8 horses were in the small, confined area and as the gate opened to let one horse into the ring, 2 or 3 horses would try to go through together and the gate operator would close the gate on the heads of the other horses to keep them from all going through at the same time. This went on during the duration of the sale.

In the parking lot were many pickups with trailers from many states. Investigators found trucks from Iowa, Missouri, Illinois and Wisconsin. These trucks did not have DOT numbers on their vehicles. The law requires DOT numbers to be displayed on vehicles engaged in interstate commerce. Animals’ Angels will file complaints to the Dept. of Transportation. Additionally, attending the auction was Duncan Farms from Kansas, Tongen from Minnesota, and Kurtenbach from Iowa.

After the sale, at 17:15, a semi and single deck trailer, Baker Farm, DOT# 2308752 backed up to the dock and began loading horses. Two things to note, first, Baker Farm’s DOT# is listed as inactive and as such he should not be on the road. Animals’ Angels will file a complaint to the DOT regarding this issue. Second, Baker Farm’s DOT information lists an address in Iowa, however, the semi displayed Oklahoma plates.

At 17:30, Kurtenbach began loading and left at 18:00. No further activity was observed and investigators left in order to return the following day.

On August 6th, investigators arrived at premises at 07:25. There were already 6 vehicles in the front parking lot, most likely auction employees. There was no activity.

At 08:30, the investigators slipped through the auction to the outside pens located behind the auction barn and found two pens with horses that were sold the day before. These horses wore the white square auction tag and the green USDA slaughter tag. These horses were transported an unknown amount of time the day before, went through the auction, and now were slated to take another extended transport to the slaughter plant to be slaughtered. Another pen contained loose horses displaying the white auction tag.

At 11:50, Kurtenbach arrived and backed up to the loading ramp and began loading horses. This is the second load of horses he purchased at the auction. At 12:14, Kurtenbach left the premises. At 12:56, a Canadian semi and single deck trailer, UTICA, arrived and backed up to the dock. The driver then went to sleep until 17:00. At this time, the driver began loading the horses marked with the green slaughter tags. With loading completed, the truck left at 17:35.

It was now clear that these horses were indeed bound for slaughter in Canada. Investigators followed the truck as it proceeded north. The truck was weaving drastically, first onto the shoulder then when the driver corrected, the truck would go across the lane and over the white line.

Animals' Angels will report all concerns and violations to the appropriate enforcement agencies.