There are approximately two million horses in Argentina. Much like the U.S., Argentinean law states that it is illegal to sell horsemeat for human consumption in Argentina. However, in 2011 alone, 130,000 horses were slaughtered, exclusively for export. 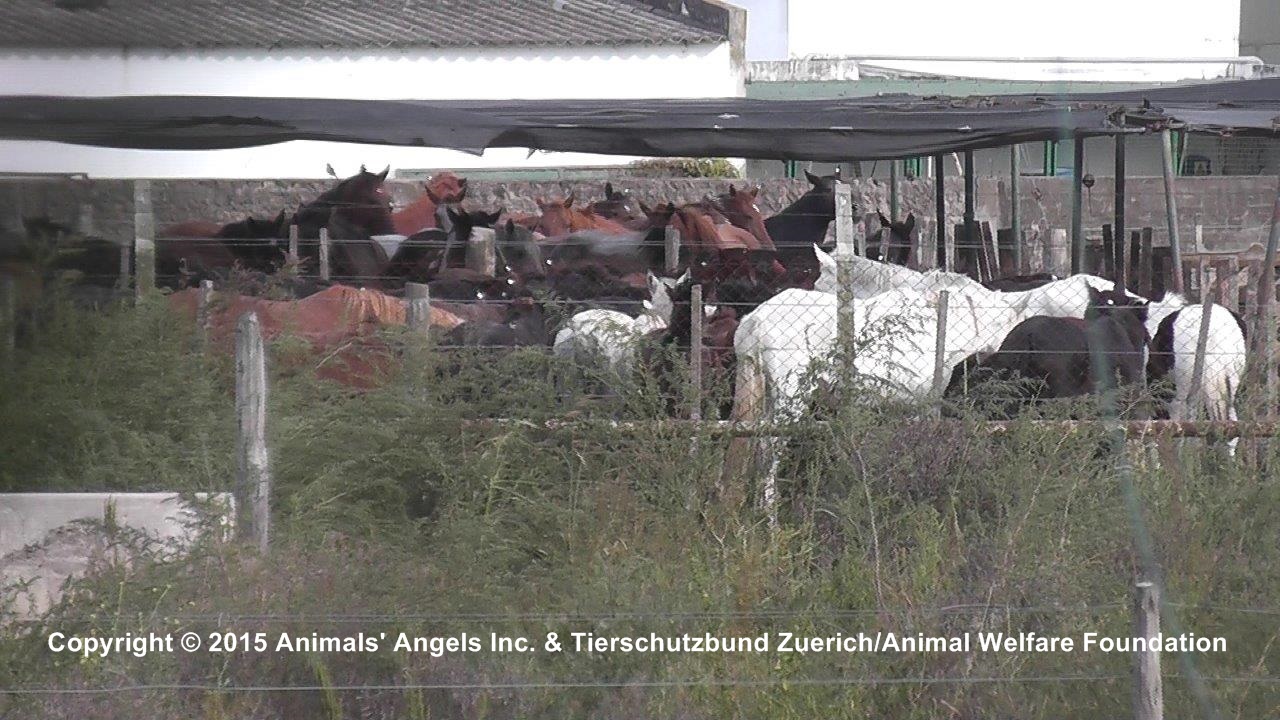 As can be expected slaughter horses in Argentina are not treated humanely, either during transport or at the slaughter plant. Multiple investigations conducted by Animals’ Angels and our European partners, Tierschutzbund Zuerich/Animal Welfare Foundation (TSB/AWF), in the past five years have documented horrific abuse and extremely long transport routes without water, feed or rest. At collecting stations, horses were severely beaten with sticks and chased and bitten by dogs. Injured and sick horses were not afforded veterinary care and were instead left to languish with their injuries. Inside the open-roof trailers, the horses were exposed to the blazing sun and pouring rain.

Argentina does not have any sort of microchip system in place and horse theft is a serious problem. In February 2013, a considerable number of stolen horses were recovered by their owners from the Lamar slaughterhouse and these were not isolated incidents. There have been many similar reports in Argentinean media regarding stolen horses being sent to slaughter. 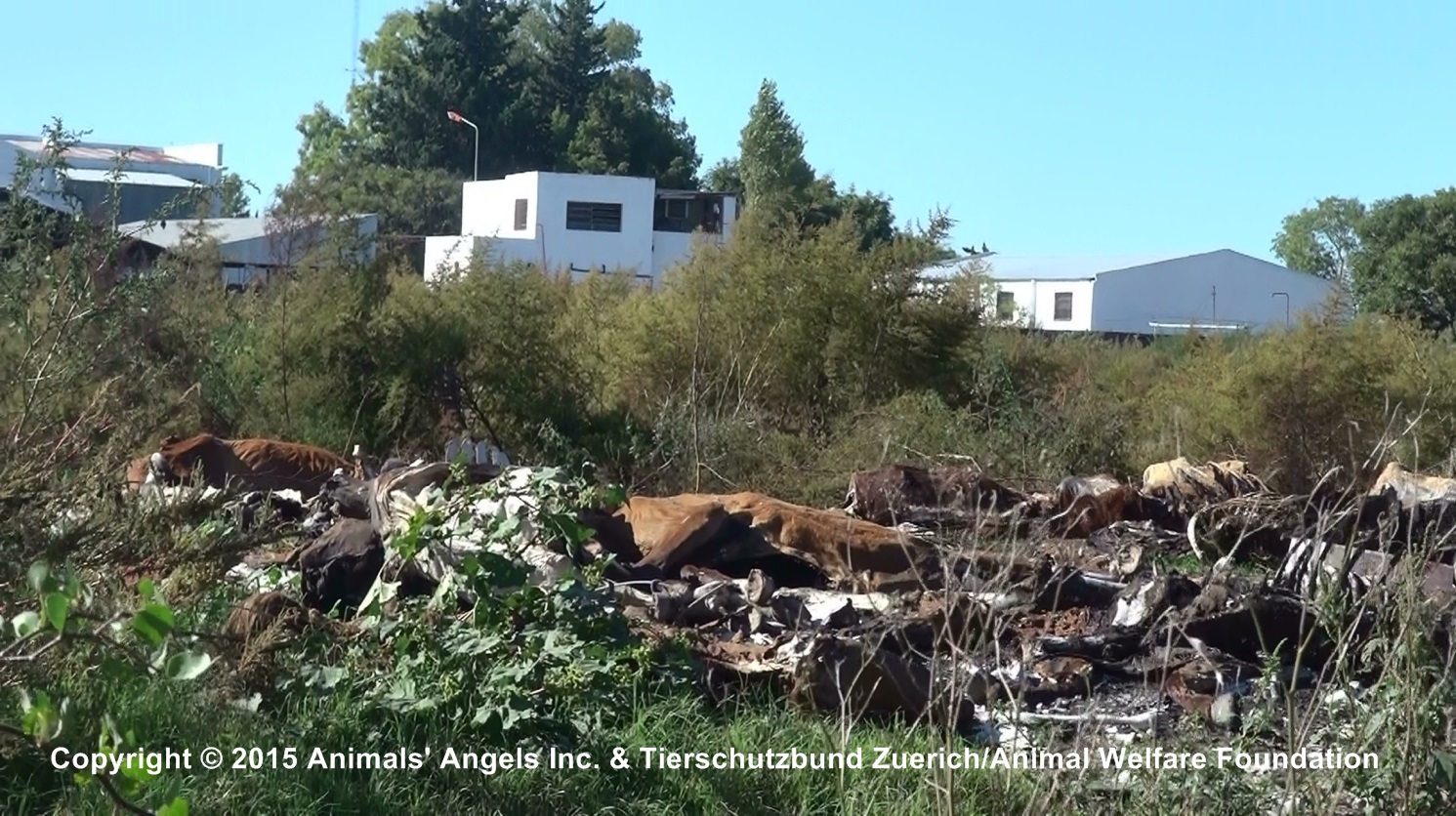 Not surprisingly, there is also a high risk of drug residue in horsemeat from Argentina as there is no system of traceability. The last owner of the horse simply has to sign an affidavit regarding any veterinary treatments during the last 6 months and these are easily falsified. However, it should be noted that phenylbutazone and other drugs can be bought without a prescription. Furthermore, many of the stolen horses that are sold for slaughter are sport or pleasure horses that were never intended for human consumption.

In our past investigations, severely injured, dying and dead horses were found in the holding pens. After these findings were released in Europe in March of 2014, the Dutch supermarket chain Jumbo carried out their own audit in Argentina. They found the conditions at Lamar to be unacceptable and immediately stopped all imports. Swiss supermarkets also stopped selling horsemeat from Argentina.

In April of 2014, the inspection company SGS withdrew Lamar’s animal welfare certification. However, as of today, Lamar is still on the list of EU approved plants. 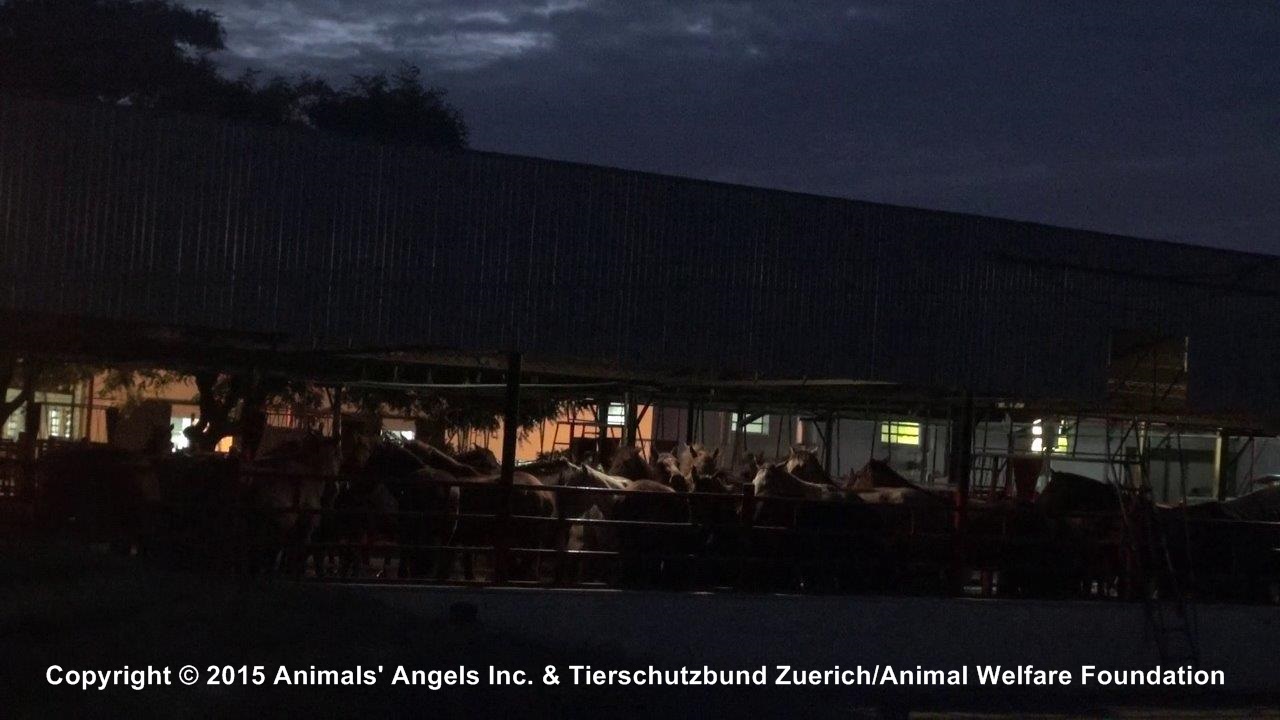 In conjunction with Tierschutzbund Zuerich/Animal Welfare Foundation (TSB/AWF), Animals’ Angels conducted a follow up investigation to assess the situation and to report back our findings to the EU Commission.  This investigation revealed that the situation remains unchanged with no improvement whatsoever noted.

It was noted that at the Lamar plant, horses are no longer kept in visible pastures.  Instead, they are held in pens close to the plant and slaughtered immediately.  This could be an attempt to make the observation of injuries and conditions more difficult as well as limit the chances of recovery of stolen horses.  Open roof trailers are still in use.

Sadly, horse theft remains a major issue.  In one case, an owner who lives close to the Lamar plant had his mare stolen twice.  He was lucky enough to be reunited with his horse after the first time.  In 2013, he recovered his stolen mare from the holding pens of Lamar, one year after she had been taken. She was in devastating condition as she had been used as a “garbage horse”, pulling very heavy loads. At first Fernando did not even recognise the mare, she was emaciated and her whole body was covered with wounds. However, the mare recognised Fernando and immediately walked up to him. 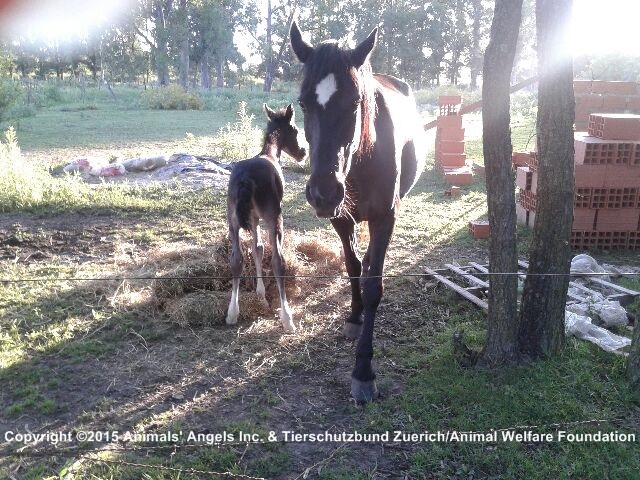 Fernando informed the investigators that two months ago the same mare had been stolen for the second time. He was very upset, especially because she had a small, three month old foal. The thieves took only the mare and left the foal behind. Fernando filed a complaint with the local police authorities, but nothing happened. He is still searching for the mare, but has not much hope that she will ever reappear.

The traceability of horses is impossible due to widespread horse theft and the fact that there is absolutely no reliable identification system in place creating a high risk of drug residue exposure.  Obvious and horrific humane concerns are rampant in this predatory industry.

Therefore Animals’ Angels and Tierschutzbund Zuerich/Animal Welfare Foundation (TSB/AWF) are once again strongly calling upon the EU Commission to ban all exports from Argentina.