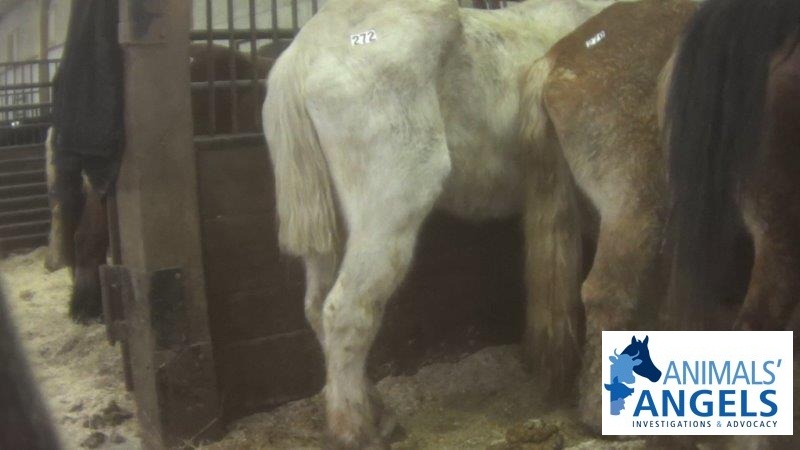 When investigators arrived at 8:50 a.m., the sale was already crowded with many Amish and Mennonite buggies in the lot.  Despite the harshly cold temperature of 24 degrees Fahrenheit, drivers were observed at the track, rigorously test driving the horses. Like the drivers observed at the Penns Valley Auction, these individuals were pushing the horses hard around the track and several animals were completely covered in sweat.

This auction has several areas where they keep animals prior to their being run through the sale ring. The inside barn was very crowded with horses tied to feed troughs and overhead rafters to keep them from moving around. The troughs had hay but there was no access to water.  In the side barn, there were approximately 50 kill buyer prospects, old work horses that were skinny with overgrown hooves, cuts on their legs and harness sores. 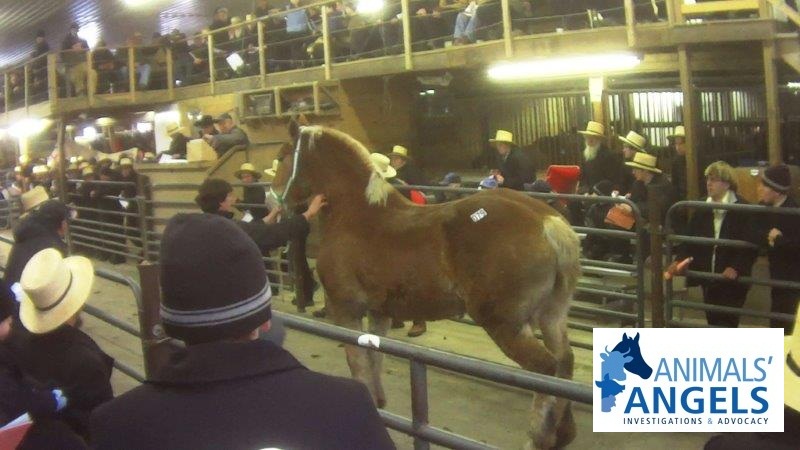 A grey draft horse gelding with the slaughter tag #272 was emaciated with his hip bones clearly showing.  Several of the horses appeared very tired and lethargic.  The main barn held the Standardbred driving horses many of whom were gorgeous indeed. All of them had their heads tied to the rafters to keep them from moving too freely which only caused their tempers to flare as they were nervous and agitated in the crowded atmosphere -- there was a lot of biting and kicking observed.  Several of the horses were fresh from the track.  Outside, there were three pens, one held ponies and two with drafts and mules. The pens were very muddy but they did have access to hay and water. 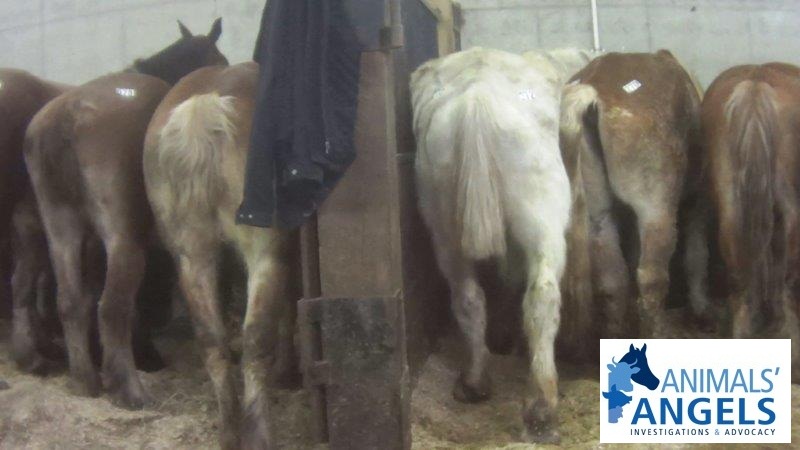 The sale started off with the work horses at 9:55 a.m.  As the sale began, our investigators noted that kill buyers Bruce Rotz and his father, a buyer for Brian Moore, and Chucky Beam were lined up across from the auctioneer.  Charlie DeHart was also seen amongst the crowd. The same horse traders observed at the Middleburg and Centre Hall auctions were present.

Just prior to the start of bidding, Hoover announced that there were approximately two pens with 30 head of horses present at the auction that would sell at the end of the sale “without recommendation.” 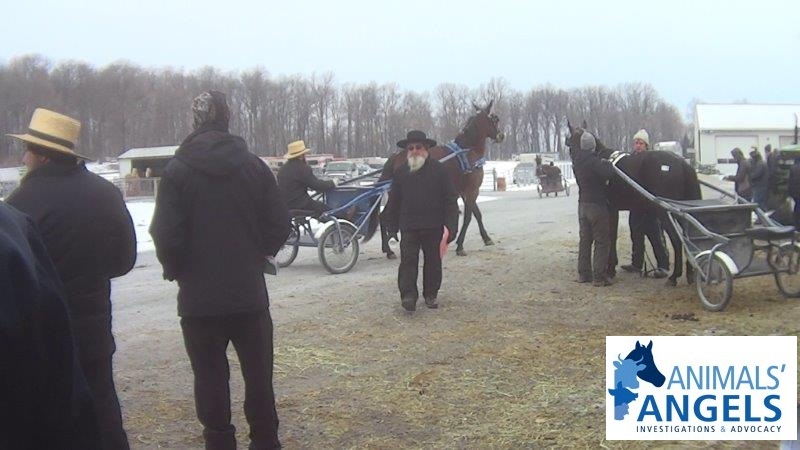 Bidding then started and several of the worn out work horses were moved through. Most of them sold with signed EID transfer papers.  The buyer for Moore, Bruce Rotz, and Chucky Beam divided the horses between the three of them, paying between $40 and $550 for them.  When the emaciated grey entered the ring, Hoover made the comment that he came from a produce farmer who had worked him in the field and that whoever bought the horse better get him to a water trough since he had been without water for several days. He sold for $150 to Brian Moore.

Throughout the sale, Hoover continued to blast out tasteless comments, referring to all horses as “things” and when a horse with clear harness marks went through the ring, he said “Well, look at these marks, she didn’t get these from standing in the barn, she got them working, I like this horse.”

When Rotz bought a pair of 23 year old sorrel mules, Hoover laughed and said, “They have been together all their lives, I am glad to see they are going out together as well,” apparently referring to them being slaughtered together.

Each of the kill buyers present purchased enough to fill a load.  Animals’ Angels will continue to monitor this sale.