In anticipation of the recent release of the latest EU Food and Veterinary Office (FVO) Audit Report (read audit here), Animals’ Angels investigators spent last week in Canada to obtain the most up to date and accurate information regarding the current status of the US/Canada slaughter horse trade. 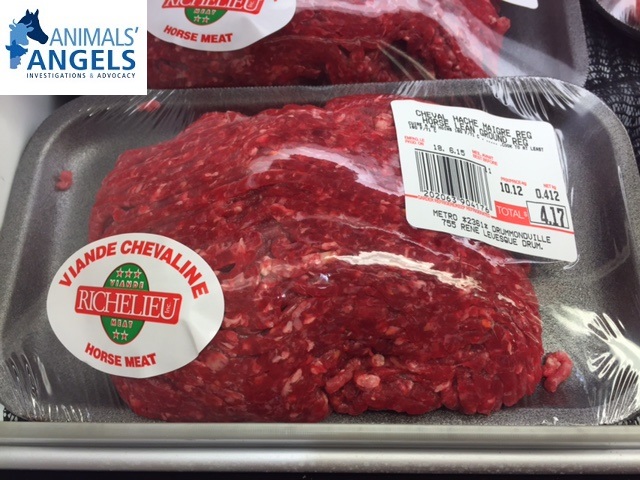 While AA agrees with most of the findings in the FVO report and was able to confirm the issues detected by the FVO, it is important to keep in mind that the FVO’s audits are always announced in advance and that CFIA inspectors, horse slaughter plants and feedlot owners had plenty of time to prepare for inspection.

As we all know, the inherent risks ever present in horse meat due to the drugs routinely given to U.S. horses are a major worry to the primary consumer. But here at Animals’ Angels, as with so many of our fellow advocates, our foremost concern is the well-being of the thousands of horses that cross our borders every year.

Unfortunately, the audit report only very briefly touches on this issue, stating that “No significant animal welfare concerns were found in any of the establishments visited.”

However, the FVO inspectors noted that a rejected horse had been re-delivered and accepted for slaughter while another horse (the wrong horse) had been removed from the consignment instead.

Additionally, cases were seen where animals had been rejected for animal welfare reasons without the certificates having been cancelled. Although the consignments had been returned to the US they were allowed entry within a few hours on the original certificates. There is no system in place to inform all points of entry of rejected consignments and the reasons for this.

And in another case, the severe lameness of one horse identified at the point of entry did not result in the load being rejected and had not been recorded in the ante mortem inspection records at the plant.

While the report is trying to down-play these findings, we feel that these results observed during an announced inspection are very concerning and raise questions regarding overall welfare and the effectiveness of the CFIA inspection of these horses at the point of entry. 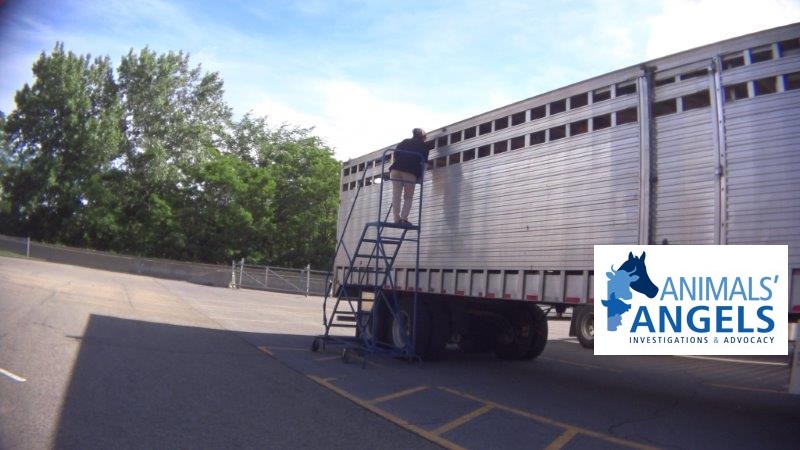 During last week’s investigation, AA was able to document a complete CFIA inspection at the Champlain/ Saint-Bernard-de-Lacolle border crossing. Three transport trucks loaded with US horses had arrived early in the morning. The CFIA inspector pulled a ladder up to the trailer and conducted the welfare check of the 28-30 horses by peeking into the dark trailer through the tiny holes at the top of the trailer sides. 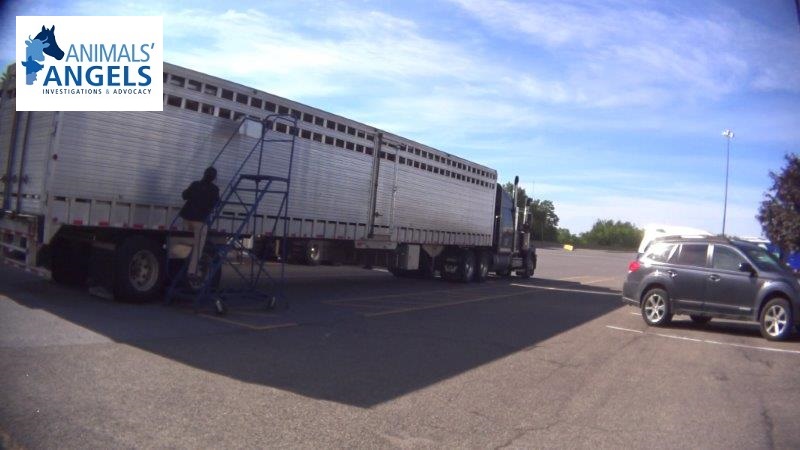 How likely is it that all injuries, sicknesses, and final stage pregnancies are detected? The FVO report notes that “appropriate facilities to unload and inspect animals are available at the designated points of entry,” but that “the CFIA stated that the regulatory requirements for controls on animal health and animal welfare at the border entry point do not require the unloading of animals.”

Insufficient inspection wasn’t the only issue our investigators detected last week. At the Viande Richelieu plant, they documented a group of US horses stuffed into an overcrowded, tiny pen. No food or water was visible. However, even if there was, it would have been impossible for all animals to reach it due to the packed conditions. 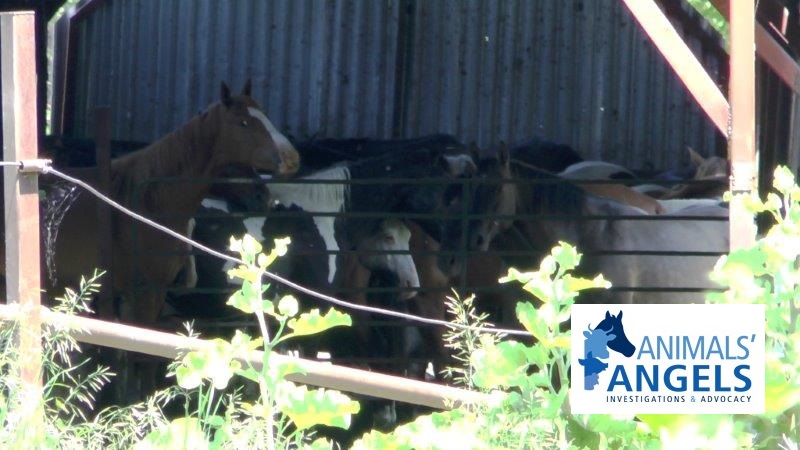 Investigators also documented a rejected horse transport from well-known PA kill buyer Bruce Rotz. Apparently there was a severe issue with one of the horses and the driver choose to take the entire load of horses back to Shippensburg, PA – after they had already spent at least 8 hours inside the trailer heading to the border. 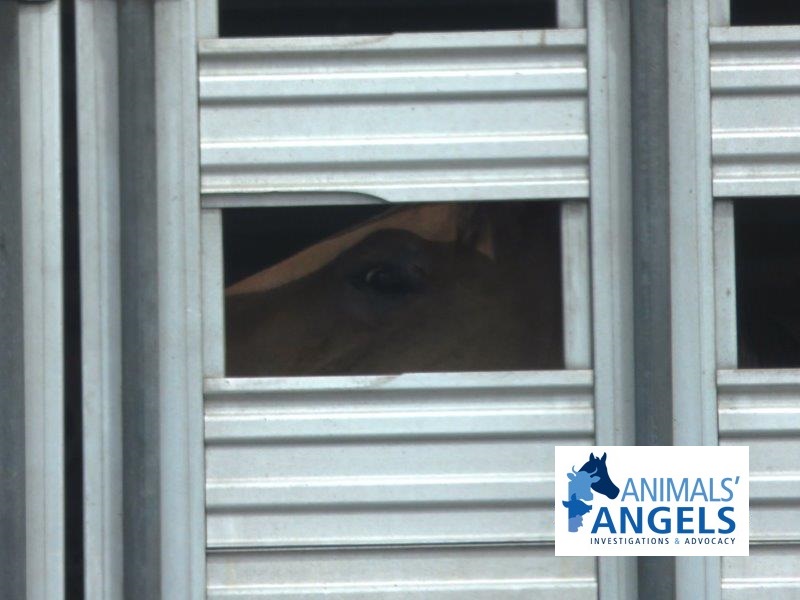 As has been proven just through this recent investigation alone, the welfare of slaughter bound horses is of major concern throughout the slaughter pipeline, not just in the slaughter plant itself. We would like to see these issues play a stronger role in the FVO’s audit process.

Of course the pharmaceuticals given to the horses from the U.S. and the lack of any reliable traceability remain of grave concern as well.  There are several statements to this effect in the FVO audit, but none more telling than the following:

There are no official checks to verify the veracity of the EIDs or whether the horses actually match the identifications registered on the EIDs. The information contained in several EIDs checked by the FVO audit team appeared incomplete, unreliable or false. It can therefore not be ensured that horses slaughtered in Canada for export to the EU have not been treated with substances which are not permitted in the EU, in particular hormonal growth promotants.

The findings of the FVO Audit, combined with the fact that there are significant welfare concerns, make it more than clear that the EU should ban the import of Canadian horse meat.  Animals’ Angels will of course provide our most recent documentation to the EU Commission and continue to urge them to make the only rational decision possible, a complete ban of all Canadian horse meat imports.

Our detailed report on this Canadian investigation will be released soon.