Animals’ Angels recently conducted an undercover investigation of Carl and Charlie Fisher, long-time father and son horse traders who are frequently seen at the notorious Sugarcreek Auction in Ohio, as well as at the New Holland Auction, and the Middleburg Auction in Pennsylvania. The Fishers, who are known to work closely with several kill buyers, currently operate a horse and tack sale in McVeytown, Pennsylvania, and sell horses online via their Facebook pages.

Past Case of Animal Cruelty Ends in Conviction 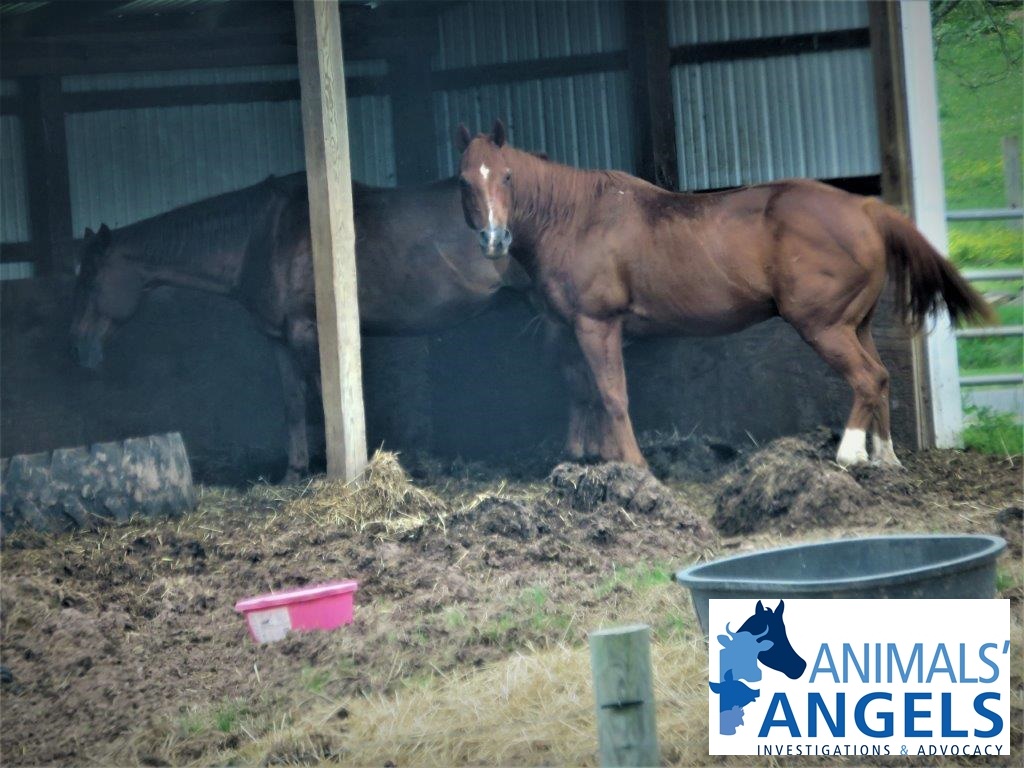 Despite being seen frequently at all the familiar Pennsylvania horse sales, Charlie Fisher and his wife are best known for their involvement in a horrific animal cruelty case that the Pennsylvania Humane Officer who handled the incident referred to as “the worst case of horse abuse” she’d ever seen. Back in 2014, Charlie and Lori were charged with multiple counts of animal cruelty after Lori loaded up three Arabian mares in horrific condition at their farm in Lewistown, Pennsylvania and transported them after hours to the New Holland Sales Stables, intending to sell them in the parking lot. However, the Lancaster County SPCA received a tip about the condition of the animals and was able to intervene.

When the auction veterinarian examined the mares, he gave all three horses a Henneke Body Condition score of 1 (extreme emaciation). One of the mares was also evaluated to be a 5 on the AAEP lameness scale (the worst possible grade) when the poor animal was unable to bear weight on a front leg. 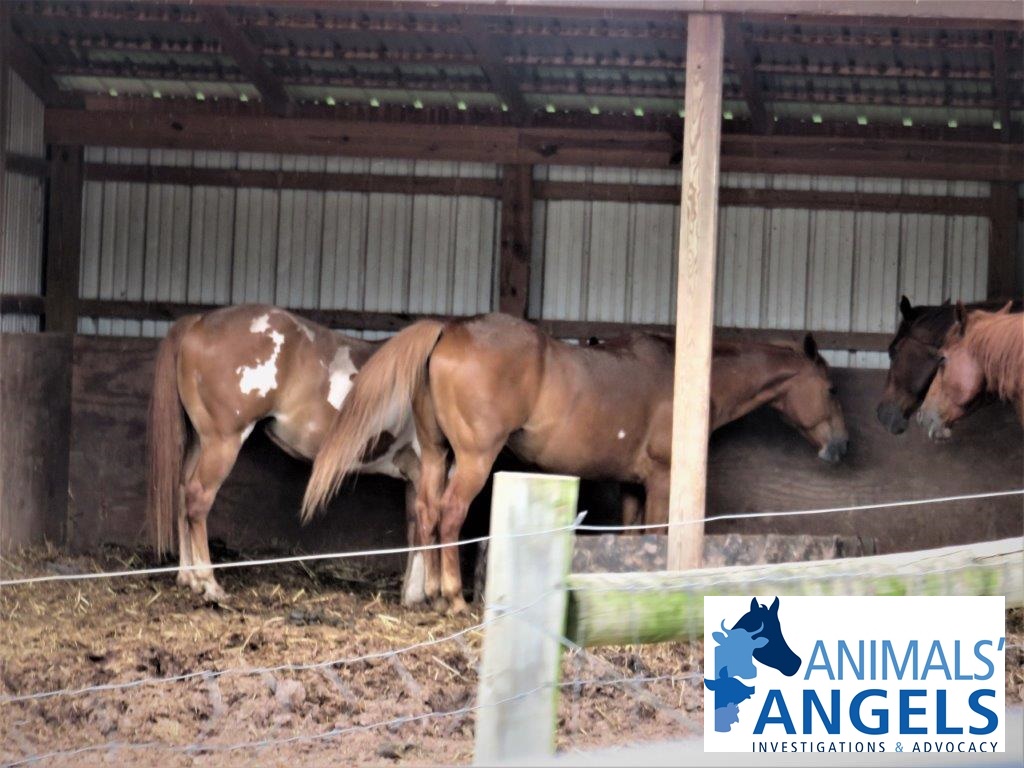 According to the citations filed in the subsequent animal cruelty case, the horses were unable to sustain their own weight during transport due to their “severely dilapidated condition.” One of the horses suffered nerve damage to its leg when it fell, and another suffered what the citation called “further stress and deterioration” during the journey. Tragically, both those horses had to be euthanized; only a 17-year-old chestnut mare survived the horrific ordeal.

Charlie Fisher was ultimately found guilty of animal cruelty, while the charges against his wife were dismissed. He was ordered to pay a fine, court costs and restitution. 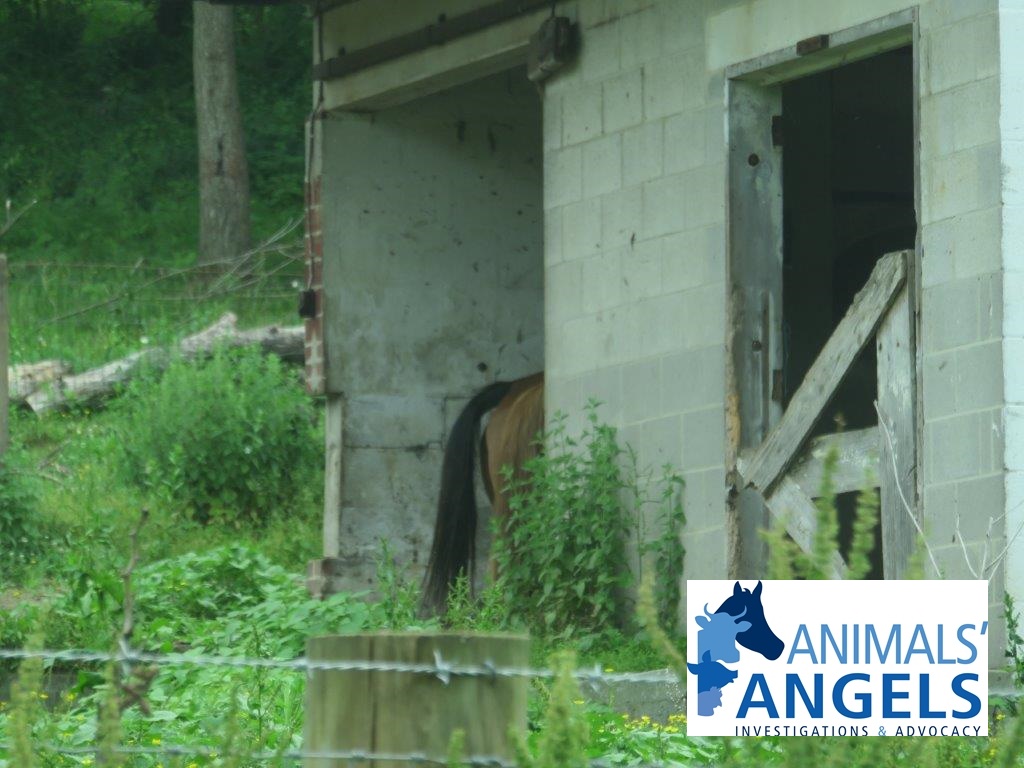 When Animals’ Angels investigators visited the Fisher family’s farms in Lewistown and McVeytown this summer, our team noted that the Lewistown property was extremely dilapidated, with overgrown pastures, a ramshackle barn with broken windows, and trash scattered throughout. Thinking the barn had been abandoned, the investigators were appalled to spot horses inside the derelict building, although they were unable to gain access to the barn or assess the condition of the poor animals trapped inside.

Moving on to the McVeytown property, our investigators observed a very different scene. The extensive farm included a well-maintained barn with tack shop, along with numerous pastures surrounding the farmhouse and various outbuildings. However, despite the vast pastures, a group of four horses had been confined in a small, muddy lot with manure/mud mix up to their ankles, and not a blade of grass in sight.

The lot contained only a run-in shed, and the horses, who appeared to be in average condition, gathered around an old tractor tire and some empty plastic bowls as our investigators observed the premises. Finally, after witnessing no human activity, the investigators left with fresh concerns about the horses in the Fishers’ care. Animal’s Angels will closely monitor the Fishers’ activities to ensure that there will be no repeat of the 2014 case.