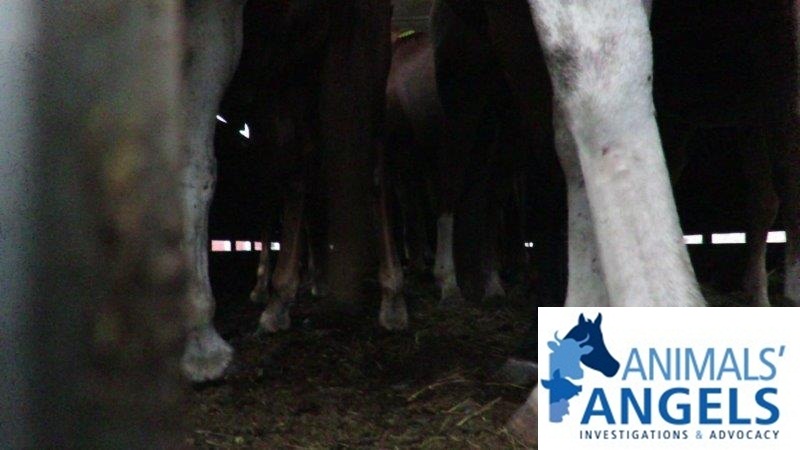 Investigators arrived at the Eagle Pass Export Pens at 7:15 a.m., on July 11, 2014. Upon arrival, they noted Tres Trucking from Morton, TX and Larry Anderton from Corsicana, TX waiting to unload outside the closed pens. A yellow Charritos Auto Express with a canvas top trailer and an orange Transportes Villareal truck with a “homemade” ex-refrigerator trailer were already parked next to the pens.

The horses inside the Tres Trucking trailer appeared extremely overcrowded and a lot of kicking, fighting and biting were observed. A paint horse in the front compartment of the trailer had a severely swollen eye, likely as a result from fighting in transit. While investigators observed the trailer, a grey horse in the middle compartment started kicking the horse next to him with both hind legs, hitting the other horses’ side several times with full force.

At 7:40 a.m., both trucks entered the export facility and the Larry Anderton truck backed up to the loading ramp and parked. At 8:26 a.m., a Stanley Brothers truck from Hamburg, AR arrived and entered the pen area.

The Larry Anderton truck started to unload at 8:30 a.m. The Mexican veterinarian arrived shortly thereafter at 8:35 a.m. All horses walked off the Anderton trailer with no problems.

When the unloading of the Larry Anderton truck was completed at 8:43 a.m., the Tres Trucking trailer backed up to the loading ramp. By this time it had started to rain and the horses inside the Tres Trucking trailer were trying to lick the rain from the trailer sides, obviously very thirsty. All of the horses were able to walk off the trailer though several appeared weak and walked extremely slowly. Many of the horses still had auction tags attached in addition to the green USDA slaughter tags, indicating that they had been purchased and likely shipped straight from the auction. 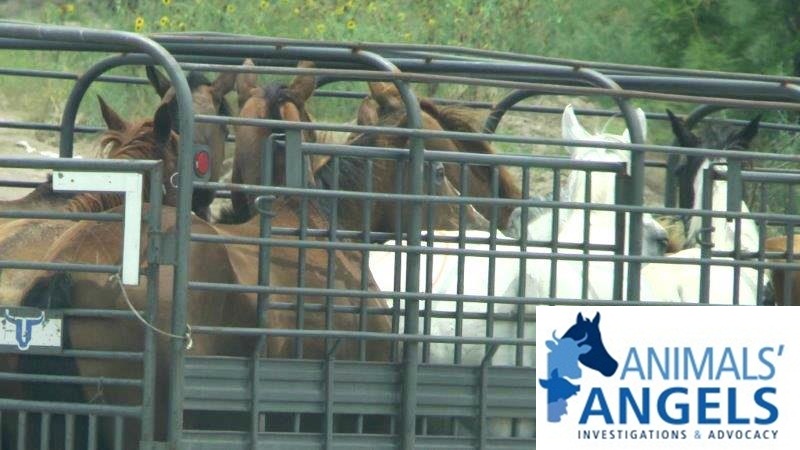 The Stanley Brothers truck was the last to unload. The trailer appeared very crowded. Investigators were unable to see the unloading, since another truck blocked their view. However, apparently some of the horses had been rejected by the Mexican veterinarian since not all horses were unloaded from the truck. The truck left the export pens heading towards the Chula Vista pens. The Chula Vista pens are owned by local kill buyer Raul Benavides and are used as a “storage facility” for rejects. The rejected horses stay there until they have either recovered or died, or are returned with the original shipper after multiple unsuccessful attempts to export them.

Investigators followed a silver 1-ton pick-up with a dilapidated, open stock trailer as it left the TDA pens with 10 horses. The truck had Arkansas plates and all the horse had a red “X” painted on them, indicating that they were rejects. There was no DOT # on the truck, but it is likely that the truck is linked to the Stanley Brothers, since they are the only ones from Arkansas delivering to the Eagle Pass Export Pens. The trailer appeared very overloaded and the horses were struggling to maintain their footing. Some of them started biting each other and were hitting their heads on the low overhead metal pipes of the stock trailer. Investigators reported the vehicle to the Texas Department of Public Safety and returned to the TDA pens to observe the export of the horses that had been delivered that morning. 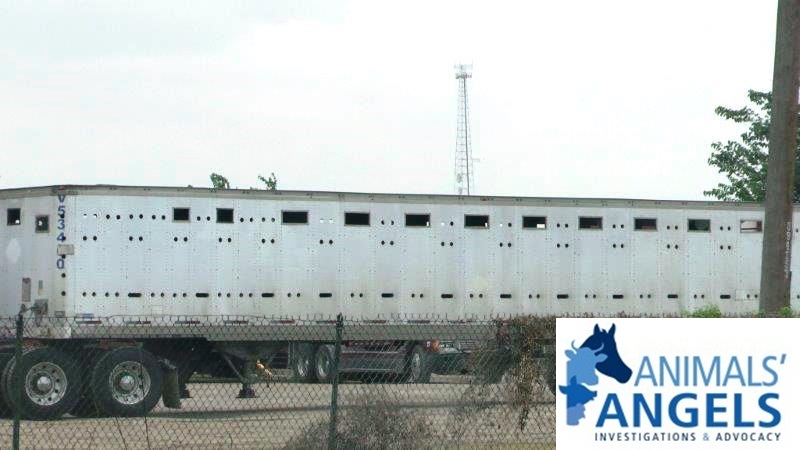 Upon arrival back at the TDA pens, investigators noted 4 Mexican transport trucks loaded with horses already parked and an additional truck still backed up to the loading ramp. One of the transport trucks was from the Jerez slaughter plant which is notable because this is the first time a truck from the Jerez slaughter plant has been observed at the Eagle Pass Export Pens. It should be further noted that this trucking company has already piled up 44 violations of US Federal Motor Carrier Safety Regulations due to the fact that their drivers were not able to understand the English language & highway signs.

Two of the trailers observed were not suitable to transport animals at all, since they did not provide adequate ventilation and airflow.

Investigators watched as another truck, Charritos Express, arrived at the pens already loaded with slaughter tagged horses. The trailer was very crowded and the horses were observed fighting. The horses were never unloaded, instead the truck joined the others heading to the border.

Investigators monitored the area until the six trucks left the TDA pens together and proceeded directly to border.