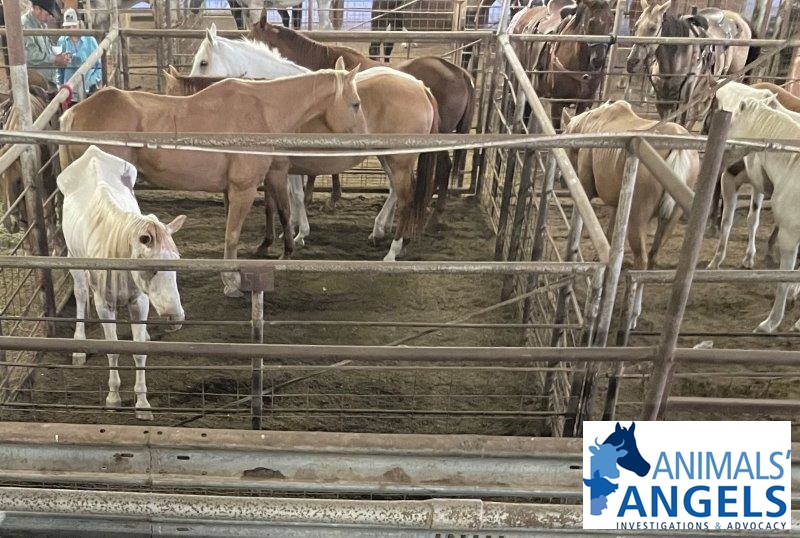 Animals’ Angels investigators arrived at the Cleburne Auction in Texas around eight o’clock on a humid September evening that was topping off at an uncomfortable 93 degrees. The auction, a longtime kill buyer favorite, was crowded with potential buyers of the approximately 100 horses, donkeys, ponies, and minis up for sale, and our investigators were distressed to see that there were no fans running in the stifling barn, and that few of the poor animals had access to water, despite the heat.

As the sale began, unmasked bidders filled the ring, apparently unconcerned about the spiking number of COVID cases in Texas. Kill buyer Mike McBarron was there, buying enough horses to fill up his trailer, along with several known horse traders from Texas and surrounding states.The vehicles observed in the parking lot included a semi canvas top trailer with an illegible Nevada license plate and no DOT number or company name on display, in clear violation of Federal Motor Carrier Safety Regulations.

It was immediately evident to our investigators that this auction is still operating as a dumping ground for irresponsible owners wanting to unload their unwanted, neglected animals. Many of the horses had been brought in from a large ranch dispersal, including unhandled broodmares, studs, and colts, and several of the mares were pregnant again.

Investigators were appalled by the deplorable conditions of many of the horses they witnessed, documenting that:

Many horses were very emaciated with ribs showing and long neglected hooves.

Several horses were covered in scars, both old and new.

A paint horse appeared to be sick with strangles, standing lethargically with his head down and coughing from time to time.

Two mares were in a pen together with their colts. They were quite thin and extremely nervous, hovering over their colts in an attempt to protect them, the whites of their eyes showing. One lethargic mare with a large “144” brand on her side and on the side of her face had likely been discarded after a life as an embryo transfer or blood farm mare. Several horses appeared to be exhausted, standing with their heads low and their eyes closed.

It was evident that the only winners at the auction were the kill buyers, who love sales such as the Cleburne Auction since they provide them with the opportunity to buy neglected, sick, and injured horses at rock bottom prices. Our team resolved to continue monitoring and reporting all potential violations at the Cleburne Auction and others like it.