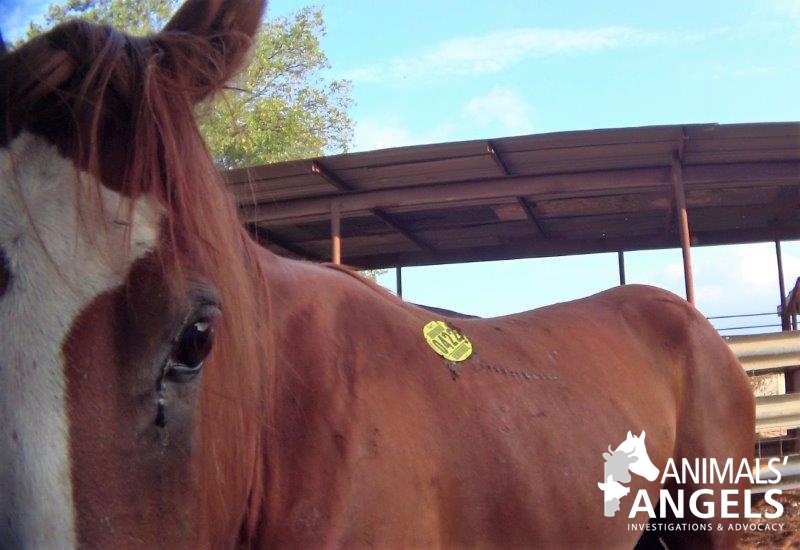 This weekly auction in the small town of Cleburne, TX, starts at 5:30 p.m. with tack, followed by riding horses, loose horses, donkeys, and stallions.  The Cleburne Horse Auction is operated by Trent Ward, who has been active in the slaughter horse business for a very long time.

At one time, Ward shipped horses to the slaughter plant in Kaufman, TX and later, continued to ship horses to the Intermeats plant in Aguascalientes, Mexico. Trent Ward has a long list of violations of the Commercial Transport of Equines to Slaughter Regulations and in fact, was fined $21,450 for shipping horses unable to bear weight on all four legs, shipping non- segregated stallions and shipping countless horses without the required paperwork. 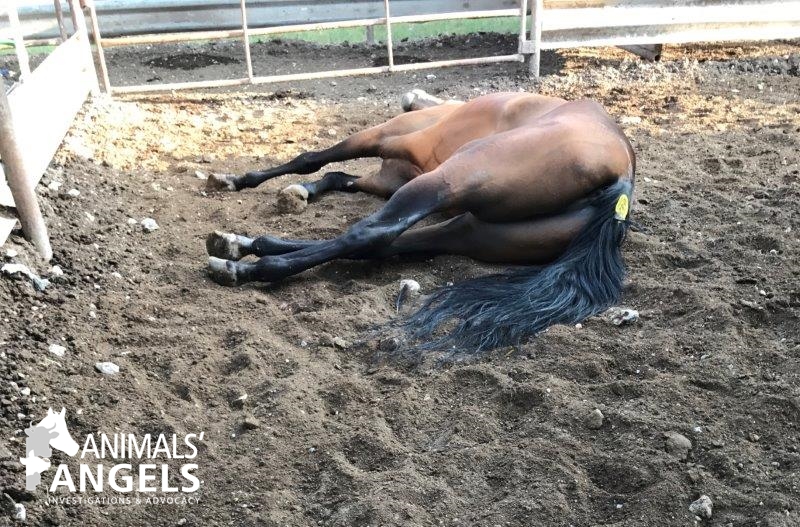 He also has a long-standing relationship with Texas’ largest kill buyer, Mike McBarron, with whom he operated the T & M Horse Company. The weekly horse sale in Cleburne held by his old friend allows McBarron to acquire a steady supply of horses for slaughter as well as his flourishing broker program.

On 8/2/17, when our investigators arrived at the auction, it was a rainy day with temperatures in the low 80s. The auction was very busy and the parking lot was packed with smaller horse trailers and large stock trailers. No tractor trailers were observed. A white pick-up truck from Texas Animal Health Commission was parked next to the barn. 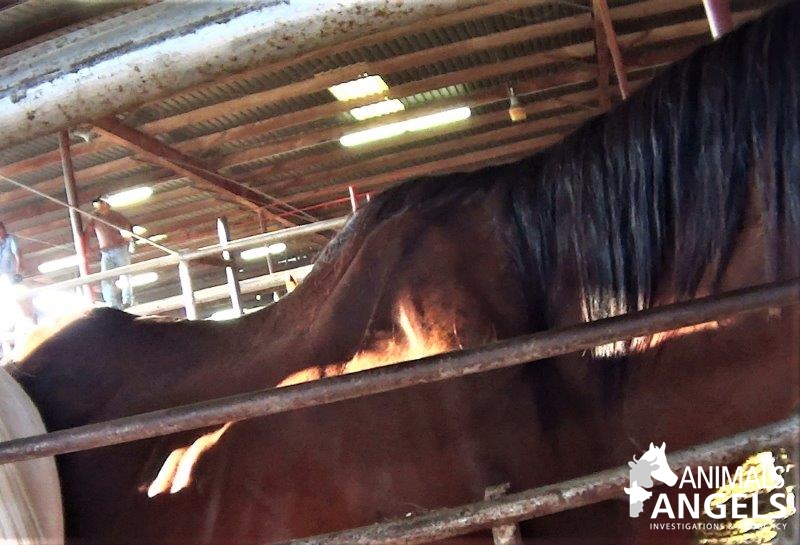 After walking the premises, investigators noted that there were approximately 125 horses for sale. The property has an older auction barn with a partially covered pen area that can be observed from a small catwalk.

When investigators entered the pen area, they immediately noticed that there were several horses in poor condition: 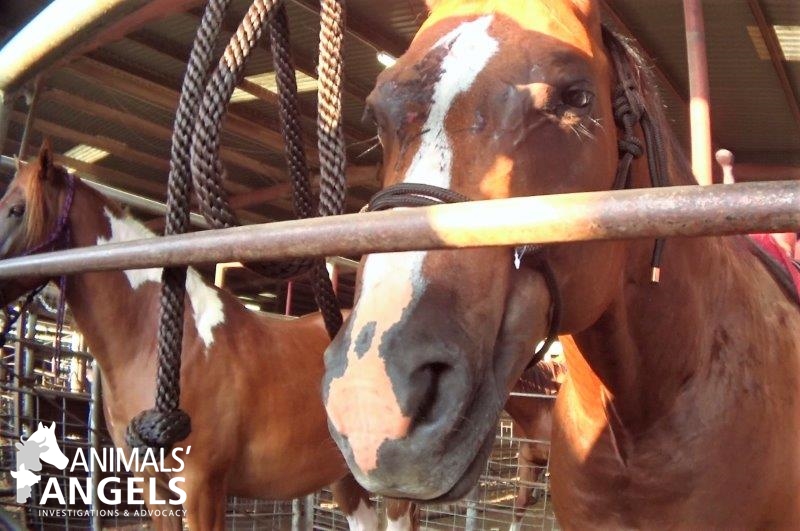 Most pens had no access to water. Investigators also noted that one of the pens held mixed gender donkeys and one of the jacks was terrorizing/mounting the females in the pen, which had no way to escape. The auction should have segregated them.

The horse sale started at 8:00pm, with Trent Ward acting as auctioneer. Mike McBarron maintained a prominent presence next to the auction ring, sitting on a little pedestal with an office type chair. Kill buyer Trent Saulters was also present, as was horse trader Blake Thompson. 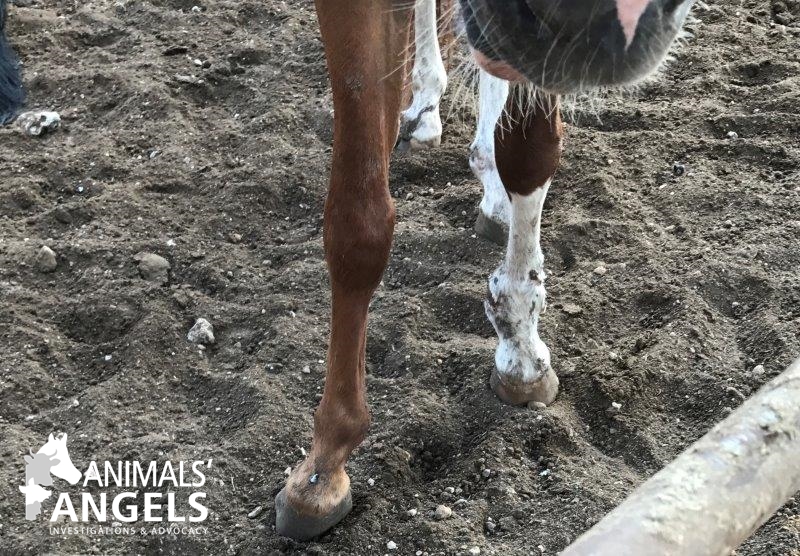 Riding horses sold first, with several horses fetching high-dollar prices. A group of horses was brought in by the well-known Pitchfork Ranch, a multi-faceted operation that includes horses, cattle, hunting, and oil. Many former camp/dude ranch horses had also been brought to the sale and were sold for very little money.

Mike McBarron was bidding with numbers 2, 3, 5 and “straight.” He did have some competition for the horses during this sale. Based on his bidding and the horses bought, bid card #2 seemed to be horses for his broker program, “straight” were slaughter horses, bid card #3 was donkeys, and bid card #5 was stallions. 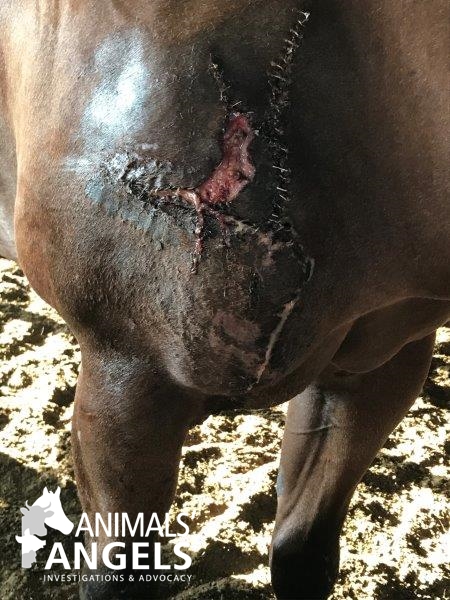 It was also very evident that he was anxious to secure a lot of horses as he was bidding fiercely against private individuals trying to purchase a horse. At one point, he was even bidding against a family wanting to purchase a horse for their young daughter, who was extremely disappointed that she didn’t get the horse she had chosen earlier in the pen area.

McBarron paid way above slaughter price for many of the horses acquired while bidding under #2, while he paid no more than $200-$300 for horses when bidding for “straight.” Also of note, the majority of animals purchased by him were bought with #2.

Animals’ Angels will continue to monitor this location and report all violations witnessed to authorities.