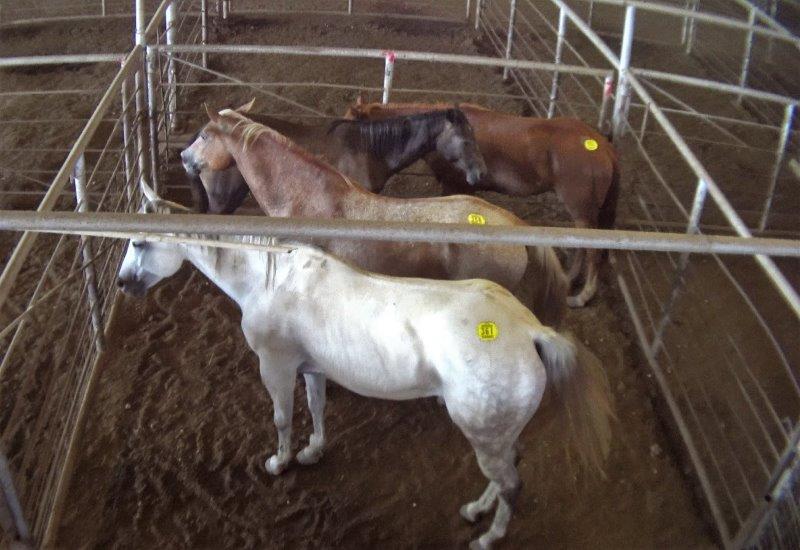 Temperatures hovered close to 100° degrees at the Cleburne Auction in Texas when Animals' Angels went onsite this summer for the third year running. Once again our investigators were outraged to observe the excruciating conditions suffered by the 100+ horses offered at Trent Ward's weekly kill sale during their undercover visits in July and August.

Our investigation found that Trent Ward and his management team failed to improve the appalling conditions observed in previous years. Instead of making desperately needed changes to relieve the suffering of the animals at the auction, Ward decided to post up several warning signs stating that the use of cameras is forbidden. This shameful attempt to hide the auction's poor conditions is similar to the tactics of the notorious New Holland auction in Pennsylvania, which unsuccessfully tried the same ploy. Undeterred by the new signs, our investigators entered the Cleburne auction determined to witness and report on the welfare and treatment of the helpless animals inside.

Our investigators reported that: Most horses had no access to water. Fans had not been installed to cool the pen area despite the excruciatingly high temperatures. Several horses were very thin or emaciated. Some horses had open wounds. 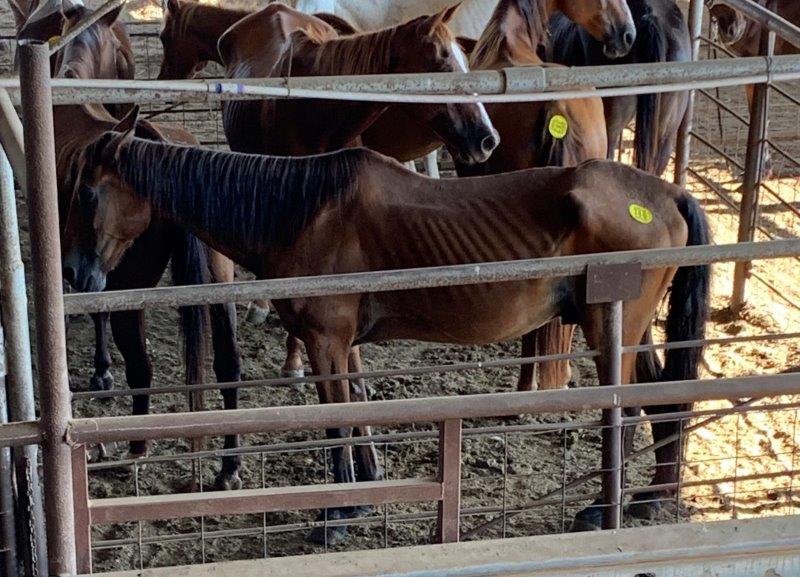 Despite the fact that many pens were empty, auction workers put "loose" horses together in larger pens, going so far as to put a stallion with mares and geldings in one of the pens. Several horses were kicked in their sides due to the auction's failure to properly separate horses in the pens. A gelding received a devastating blow to the face while trapped in the pen with the stallion. Only after the gelding was visibly bleeding did auction workers remove the aggressor. The poor conditions in Cleburne are heartbreaking, however they're not surprising considering Trent Ward's history. Ward, who has accumulated a long list of violations of the Commercial Transport of Equines to Slaughter Regulations throughout his extensive history in the slaughter horse business, has in past shipped horses to the slaughter plant in Kaufman, Texas and to the Intermeats slaughter plant in Aguascalientes, Mexico.

In fact, Ward previously incurred a $21,450 fine for shipping horses that were unable to bear weight on all four legs, shipping non-segregated stallions, and shipping countless horses without the required paperwork. And Ward's long-standing relationship with Texas' largest kill buyer, Mike McBarron, with whom he operated the T & M Horse Company, continues to allow McBarron to aquire a steady stream of horses for slaughter as well as his flourishing broker program. Along with Mike McBarron, longtime Texas kill buyer Terry Saulters is also a regular attendant at the Cleburne Auction, as are horse traders from surrounding states, such as Norman Franklin and Bob Manning from Florida.

Conditions at the auction, as witnessed and documented during multiple investigations, remain dreadfully inhumane, with several of the horses clearly qualifying as cruelty cases which should not be accepted for sale but instead reported to law enforcement. Going forward, Animals' Angels will make the Cleburne Auction a priority. We plan to increase our investigations to ensure that all observed violations are reported to the proper authorities in a full-out effort to stop the suffering at Trent Ward's kill sale.