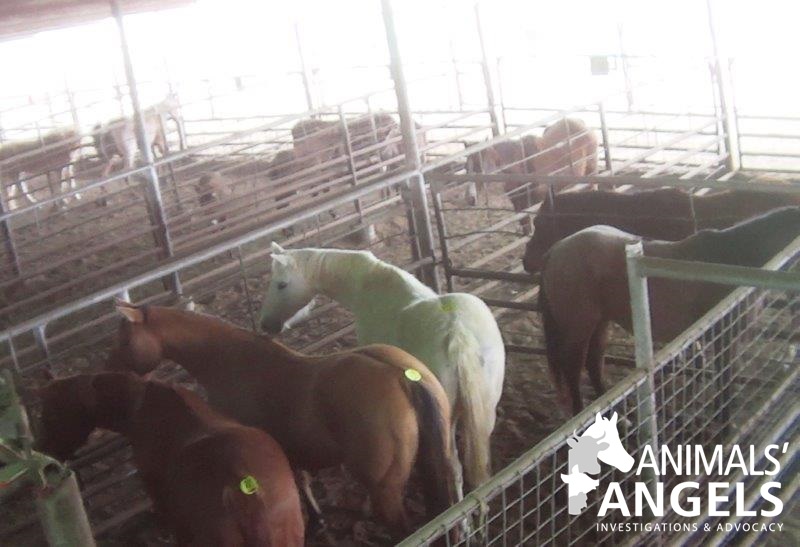 In June 2015, the O’Dwyer family purchased the Bowie facility and currently holds a monthly horse sale at the location.  This site has a large, modern auction building with a covered pen area and an additional open pen in the back as well as extensive pastures surrounding the perimeter. Additionally, the sale barn location doubles as a holding facility for O’Dwyer’s own slaughter bound horses.

The O’Dwyer family moved to the U.S. from Ireland in 2006 and bought a cattle ranch north of Nocona Texas. Michael O’Dwyer was raised on a horse and cattle ranch in Ireland as were his sons Paul and David O’Dwyer. Soon after arrival in the US, they started to get involved in the slaughter horse business and have been shipping horses to the Presidio and Eagle Pass export pens for years. O’Dwyer utilizes his own trucking company for these shipments (DOT #2019671), which further increases profits. 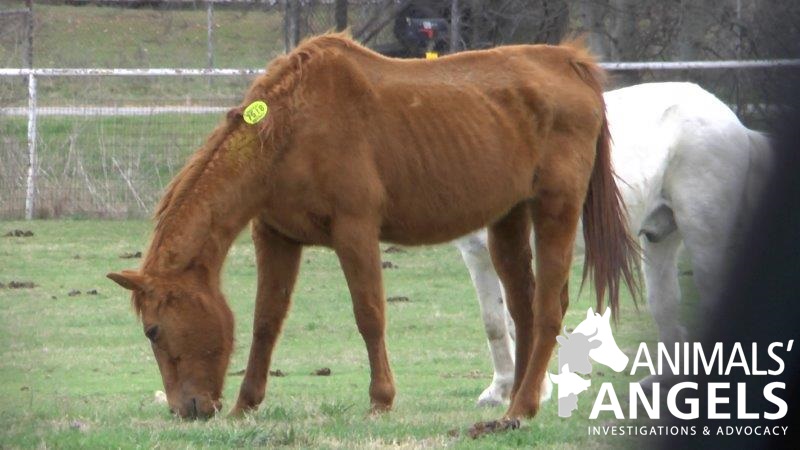 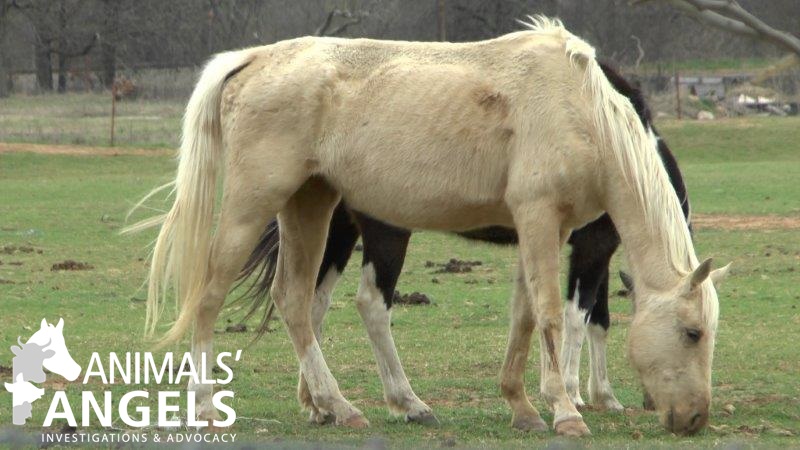 On March 6, 2016, AA investigators arrived at O’Dwyer’s sales barn at 3:35 pm. They immediately noticed large groups of slaughter horses, burros, and donkeys already tagged for slaughter with the USDA slaughter tag in the fields behind the barn and the open pen area. Several of these horses were very thin with hip bones clearly showing, others were covered in old scars. Some horses appeared to have been rejected at the border and returned, since they had spray paint on them highlighting scars or wounds and exhibited several slaughter tags. Sufficient hay and water was available to all horses observed. 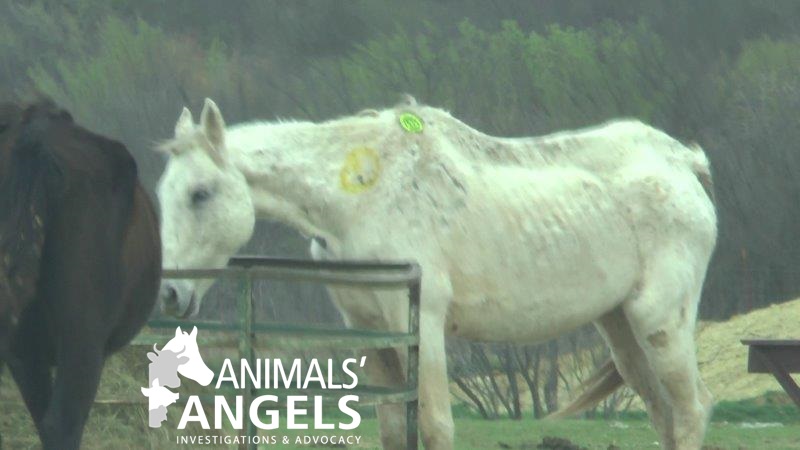 Inside the sale barn were approximately 75 horses for sale, several of them performance and ranch horses. The majority of these horses were in good condition, with only one pen holding a group of horses that were thin.  A vet was busy at the left side of the barn taking blood for Coggins testing from the incoming horses. All horses were moved with flags and the handling observed was just satisfactory. 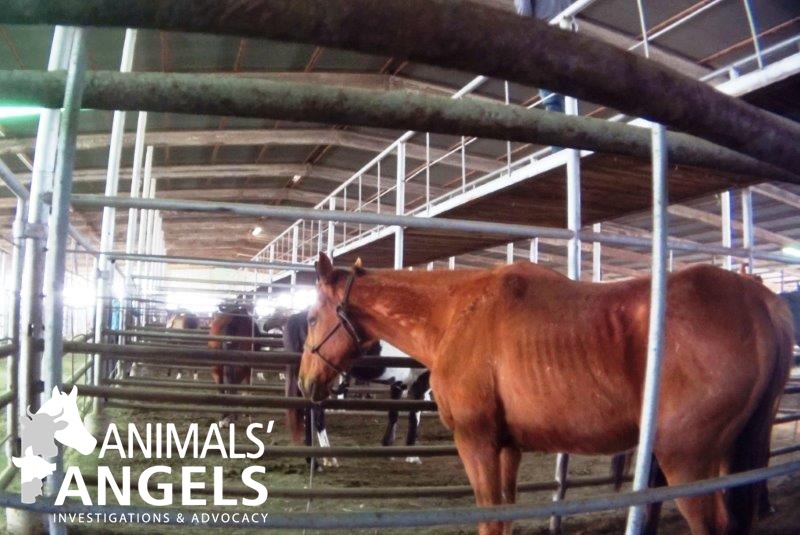 One of the performance horses was brought in by Kentucky slaughter horse buyer and horse trader Jodie Ramey.  Blake Thompson, a horse trader himself, was the auctioneer for the day. Kill buyers Mike McBarron and J & S Horse Company were also in attendance.

The horse sale started at 5:00 pm and while the auctioneer took a long time to sell the performance horses offered for sale, he significantly increased his speed as the “not so valuable” horses were sold.

We will continue to monitor this auction and feedlot operation. 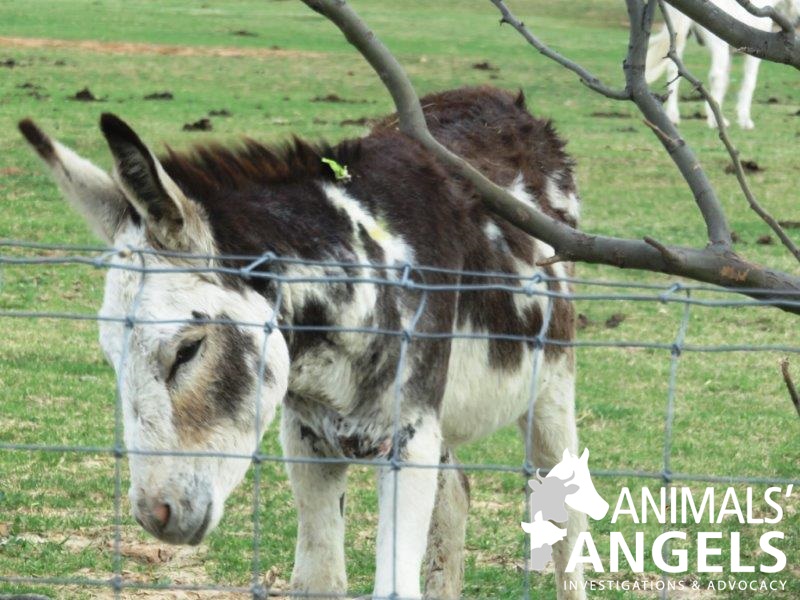