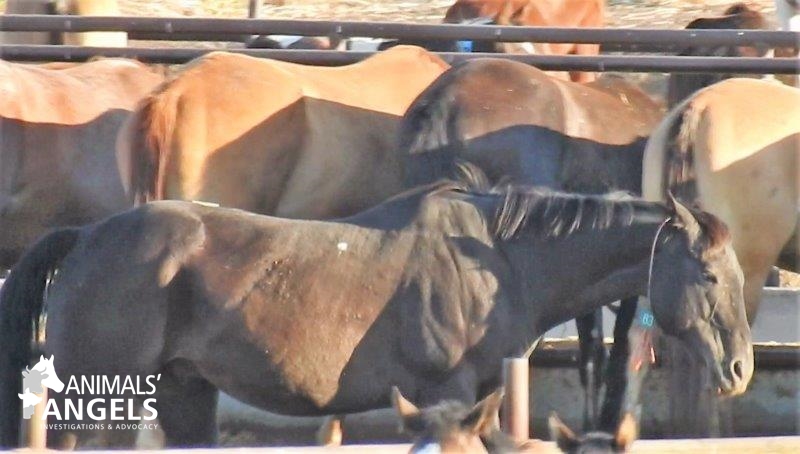 Animals’ Angels investigators returned to the Bar S Feedlot in Shelby, MT to check on the conditions for the 1500+ slaughter horses kept there at any given time for the Canadian Bouvry plant. The feedlot is currently the largest slaughter horse lot in the entire United States and serves as a holding facility for most of the horses Bouvry Exports acquires within the US from states such as Iowa, Nevada, Oregon, Washington, and Colorado. 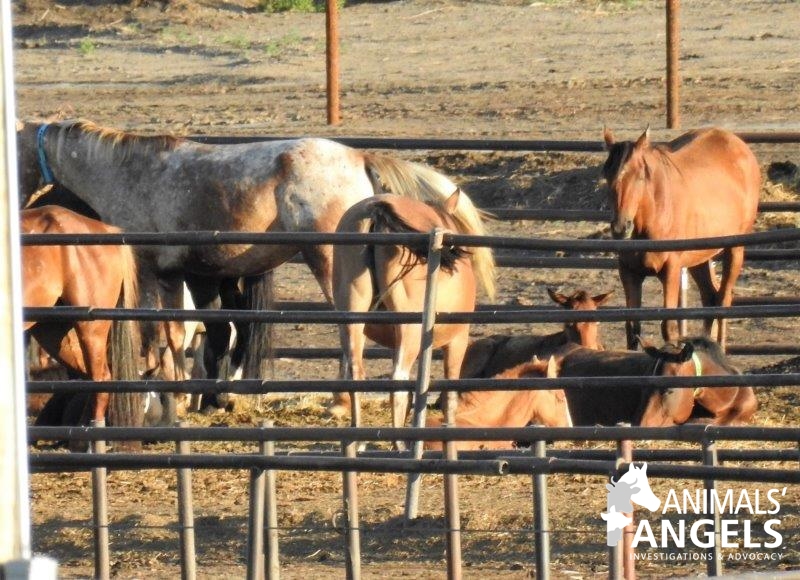 The feedlot, controlled by the Bouvry Plant, is considered a quarantine lot, since all animals inside the lot are bound for slaughter and therefore the state does not require them to be tested for EIA (Equine Infectious Anemia), a contagious and incurable disease. Arriving horses must be branded with a “S” brand within 48 hours of their arrival at the lot, indicating that their EIA status is unknown.

Most of the horses remain inside the feedlot for several weeks before being shipped to slaughter. During that time period, a sheer endless amount of food is provided to them to ensure a quick weight gain. 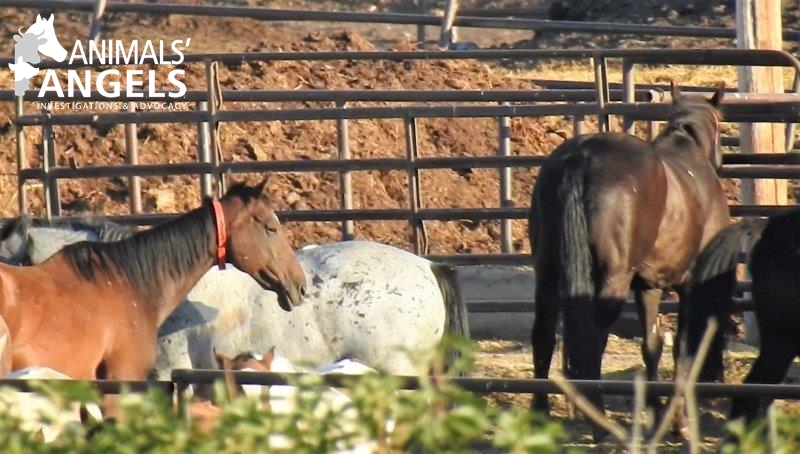 When the investigators arrived at the lot for this recent investigation, they immediately noticed that the feedlot was not at capacity and that there were less horses than during their last visit. However, the previous welfare concerns remain: there is no shelter in the entire feedlot, not even for the mares and foals, which is completely unacceptable given the harsh Montana winter weather. The feedlot is surrounded by bales of hay/straw which serve as a windbreak, but provides no protection from rain or snow. The adult horses and foals have no dry resting place anywhere on the premises. 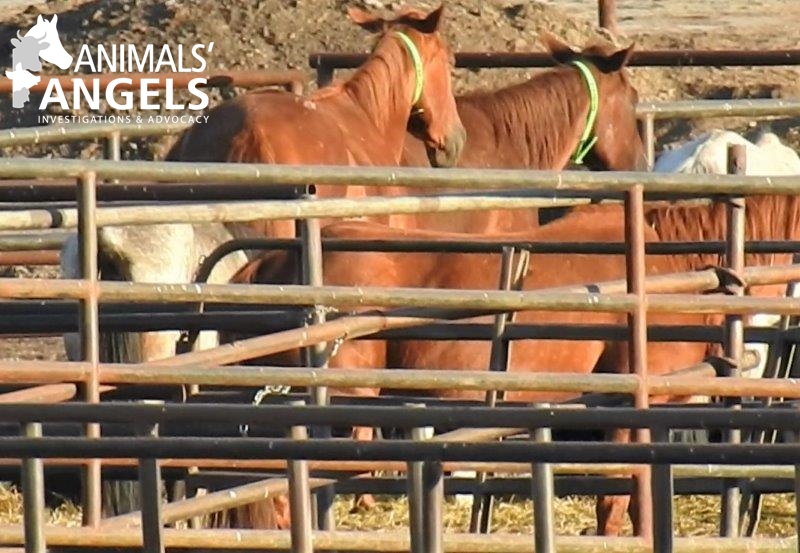 Investigators noted that the horses were wearing different color neck bands, likely a new tracking system put in place to identify how long the individual animal has been at the feedlot.

All mares and foals were together in one pen. Other pens held just pregnant mares. Several of the horses, most likely the newer arrivals, were thin and their ribs were clearly showing. Many horses were covered in old scars. One chestnut horse was seen limping. Several of the pens were crowded and fighting among the horses was observed. 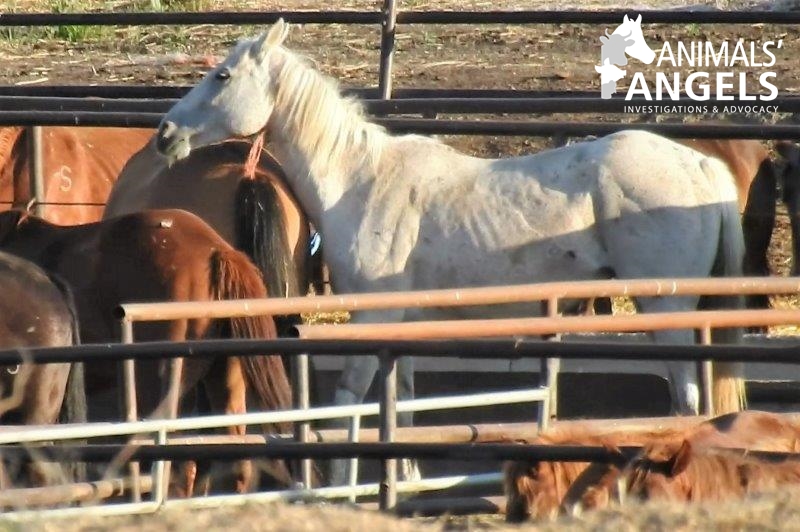 On 8/29/16 at 10:15am, two loads of horses were readied for shipment to the plant. The horses were moved to the front pens and the green USDA slaughter tags were applied. Benny’s Trucking was the first to back up to the ramp and to start loading. Approximately 25 minutes later the loading was finished and the truck pulled to the side. The horses appeared very agitated inside the trailer and could be heard kicking the trailer sides. A second truck from Vanee Livestock arrived and backed up to the ramp. 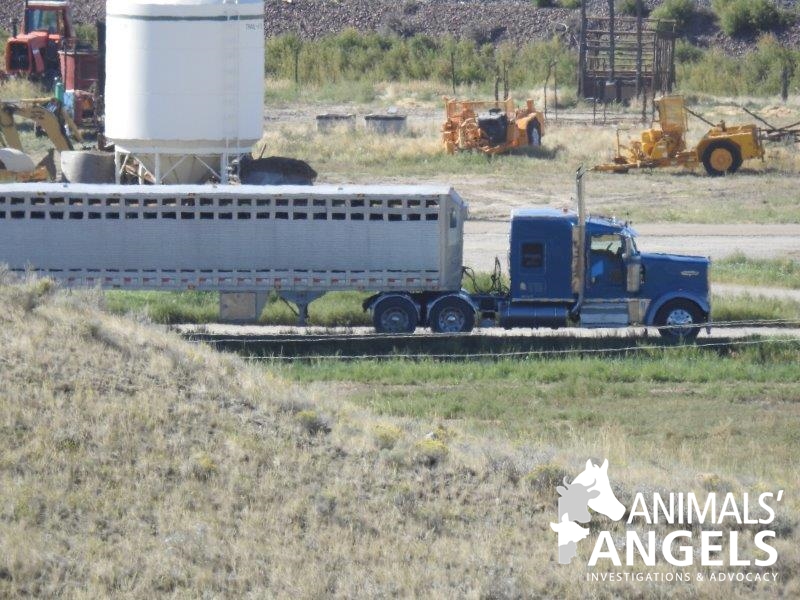 The truck belonging to Benny’s Trucking left the premises and started heading to the border at 11:05am. Animals’ Angels investigators followed the transport.

Investigators noted that the Vanee truck was not far behind and both trucks arrived at the Bouvry slaughter plant in Ft. Macleod close to 3:00pm. The horses were unloaded immediately. 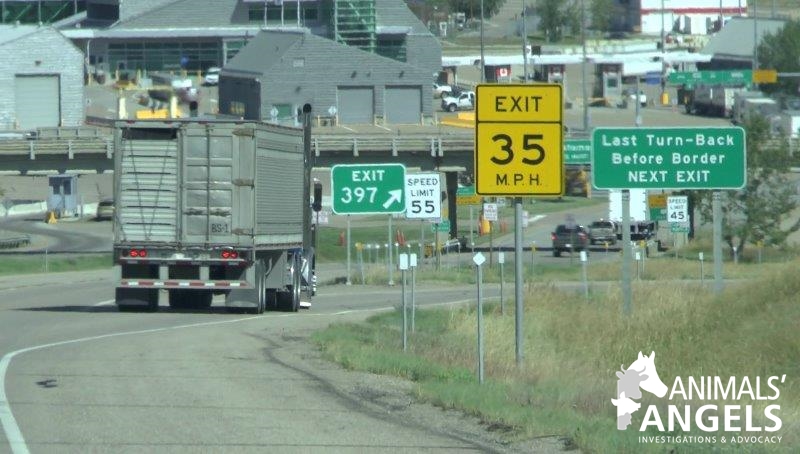 Animals’ Angels will continue to monitor conditions at this feedlot and provide all findings to the EU Commission as well as other relevant authorities.