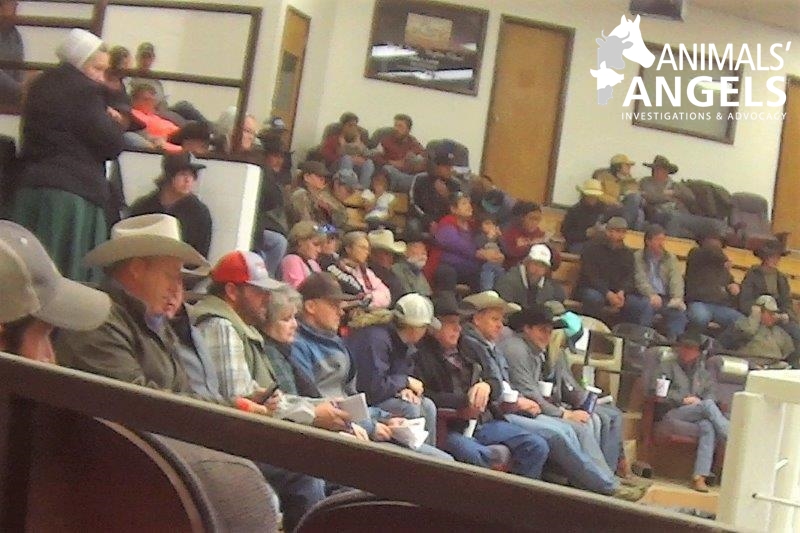 Animals’ Angels investigators returned to this monthly sale held by the Billings Livestock Commission. The sale, which is one of the largest horse sales in the country, sells approximately 700 horses each time and attracts hundreds of buyers from the surrounding states. Many of the horses offered sell as “loose” horses and are usually picked up by a small group of kill buyers. The competition for these animals is fierce and prices are comparatively high – sometimes as high as .60 cents per pound.

Investigators arrived at the sale on October 28th at 7:30 a.m. The pens were crowded, and many pens were occupied with cattle, presumably from the day before. One of these animals, a large Angus bull, immediately caught the investigator’s eye: He had been left in a pen by himself and was laying completely motionless in the middle of the pen. He was drooling from the mouth. 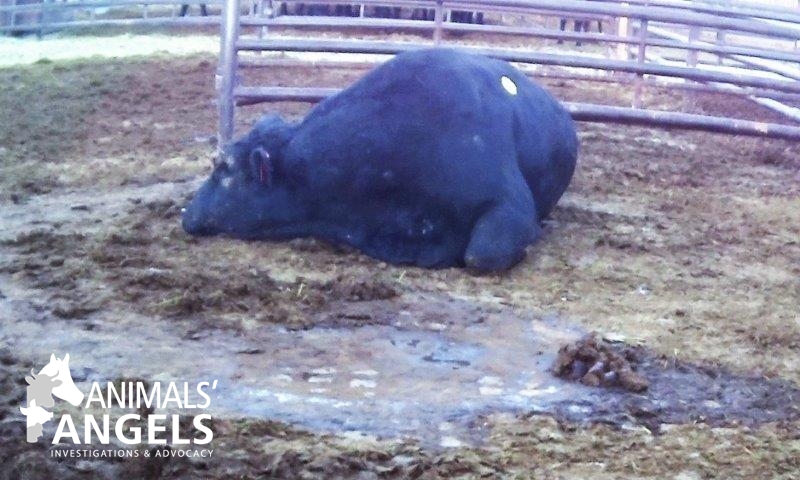 Although investigators observed him for some time, the bull never moved. Auction employees were seen walking by the pen several times, but not one ever paid any attention to the distressed animal.

Knowing that evidence would be required to file a complaint of animal cruelty, one investigator monitored the bull while another proceeded to check on the horses available for the sale and to observe the auction. The loose horses, easily identifiable by the small white tags on their hips (as compared to the big, blue letters of the riding horses, etc.), were kept in the larger pens at the back of the premises, as has been the case during previous sales. Our investigator noted that aggressive horses had been put in with others in the pens, and fighting and kicking was observed. 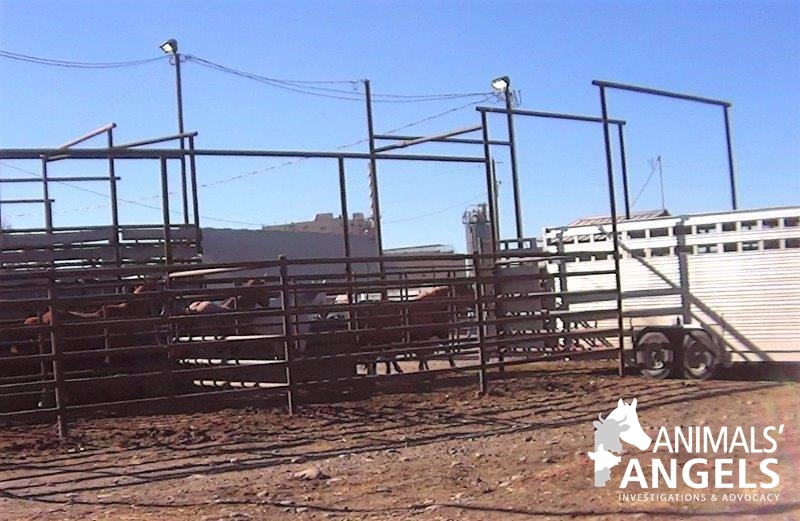 The loose horse sale started early at 8:00 a.m.  On horseback, auction employees moved large groups of horses closer to the ring using whips and moving paddles to push them through the ring entrance.  The majority of the horses seemed to be in condition and weight.

However, there were exceptions. One grey mare had a fresh eye injury that was bleeding profusely. Another group of horses, all kept in the same pen, had obvious eye infections, snotty noses, and were coughing. Their overall condition was poor and their heads were continually hanging low, a potential sign of an ongoing strangles infection. In a separate pen, a horse was lying flat on its side, completely motionless.  Auction visitors made the horse get up several times, but it continued to immediately lay back down. 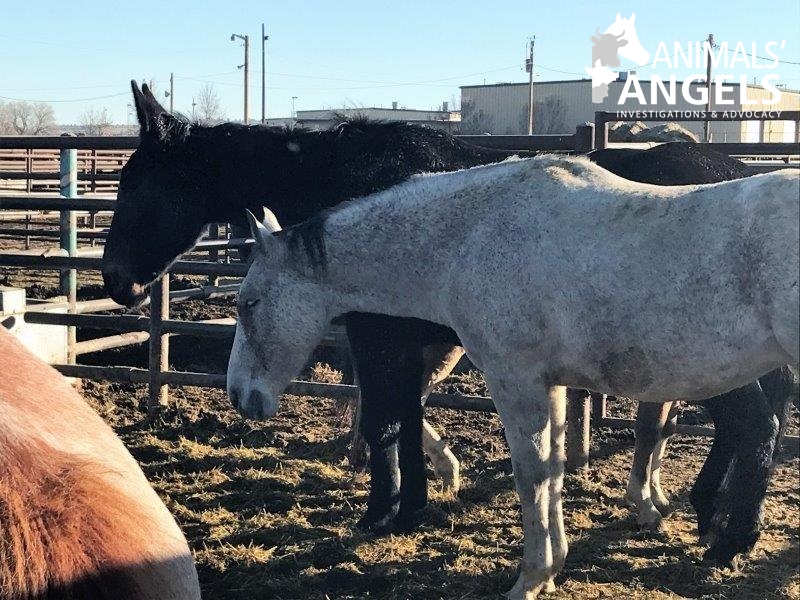 The bidding on the loose horses was fast, each animal spending only seconds in the auction ring. The kill buyers in attendance, among them Texas buyer Mike McBarron, Colorado buyer Jason Fabrizius, and Minnesota buyer Keith Tongen, were maintaining a prominent presence in the front row. A sign above the ring showed the weight and buyer number of each horse that went through the ring. Most horses were between 1200-1350 lbs.

Jason Fabrizius, known for his already previously documented rough handling of animals, purchased the mare with the bleeding eye injury for $175. He also purchased a sorrel gelding with a crippled left front leg for $250. 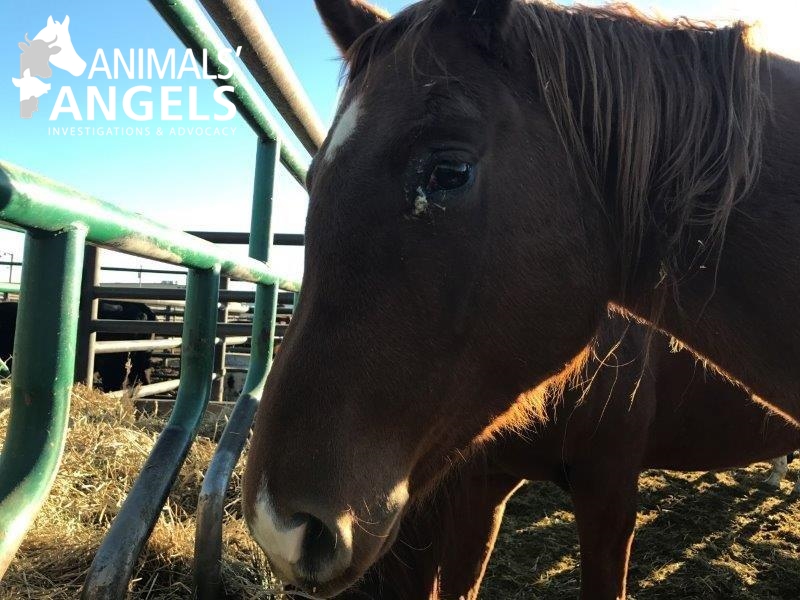 After the horses were moved through the ring, they were immediately divided up into the different kill buyer’s pens. Fabrizius, who was the first one to load, had brought his smaller black truck pulling a stock trailer as well as his semi pulling a single deck trailer. Once again, as has been noted during prior investigations, there was no DOT number displayed on the side of the smaller truck, which is a violation of Federal Motor Carrier Regulations.

The small truck was loaded first – true to his aforementioned behavior, Fabrizius used his whip extensively to move the horses into his trailer. Yelling and screaming at times, he hit the horses across the face as hard as he could. The frightened horses were extremely agitated and were clearly heard kicking and hitting the trailer sides. His large truck loaded next in an equally chaotic manner. Both transport vehicles left the property together immediately after the loading was finished. 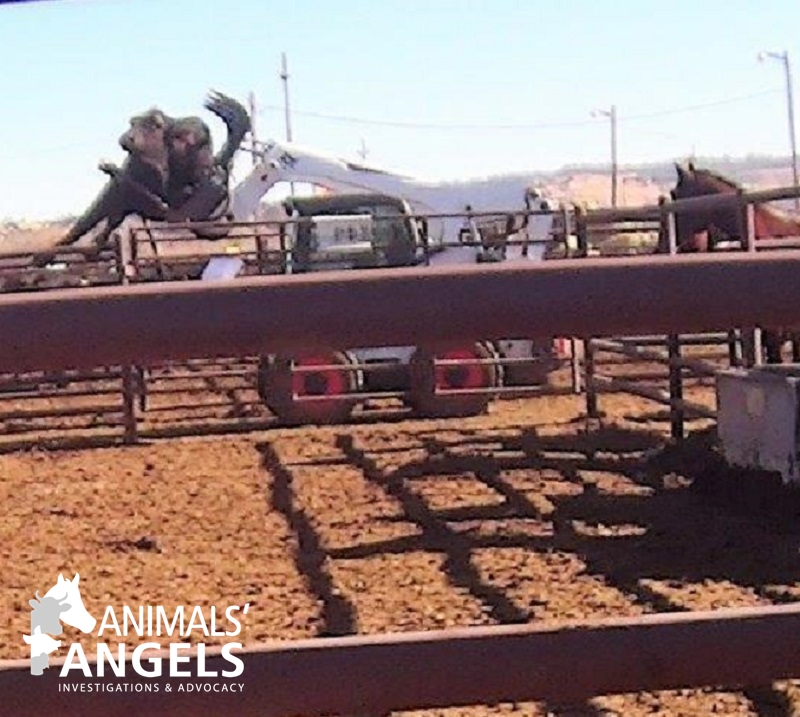 Keith Tongen’s tractor trailer and Perkins Livestock from Perkins, OK were parked at the back of the premises and did not load until later that day.

Anticipating that the bull would be shot to end his suffering, investigators observed from a safe distance. At this time, a white truck carrying a tank with liquid on its truck bed, was seen pulling up next to the bull. Shortly thereafter, the employees along with the truck and bobcat left the scene. 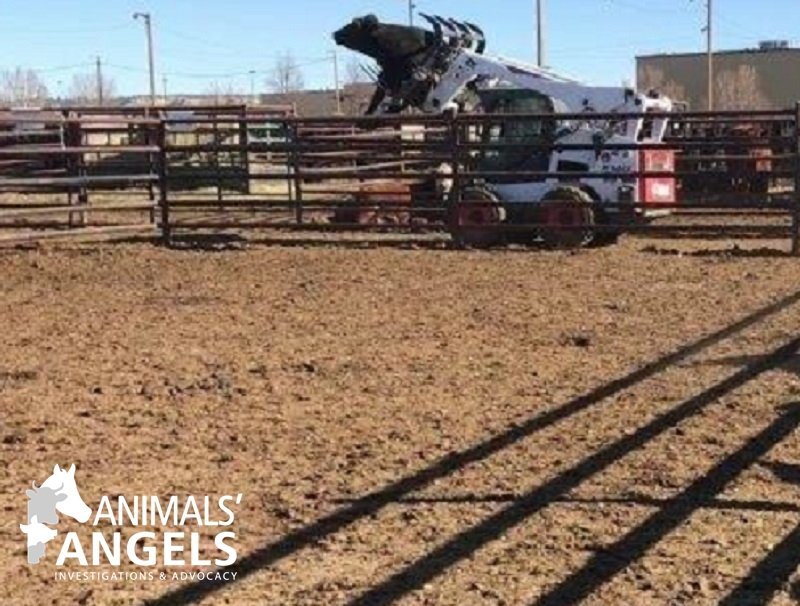 Shocked that no gunshot was heard, investigators approached the location where the bull was dumped to check on him. The bull was lying flat on his side and his face and the area around his face was wet. He appeared dramatically different than he looked just a few minutes prior.

No longer alert, his eyes were bloodshot and were rolled backwards into his head. His breathing was labored and he was in obvious severe distress.

Investigators checked his head for a potential gunshot wound, but there was none. Instead, the area around his mouth and the ground underneath his head were soaking wet. After documenting the situation along with the tag numbers on the animal and preparing to call law enforcement, investigators noticed that the bobcat was returning to the area. 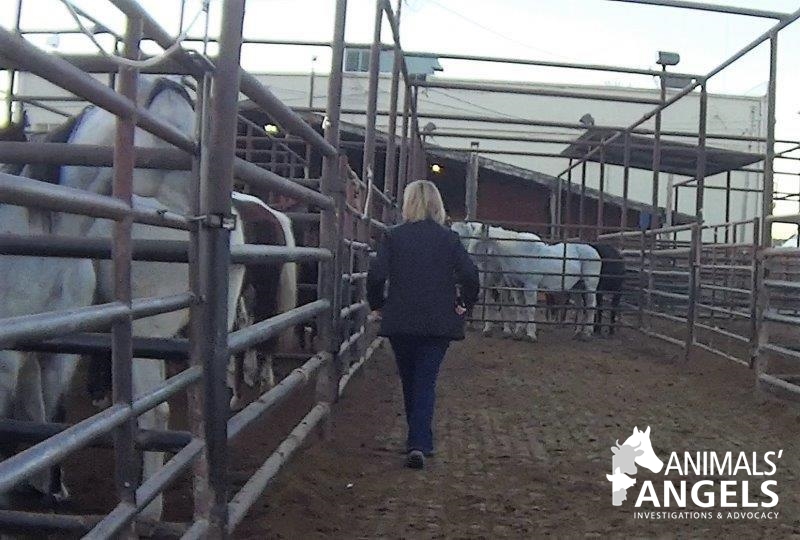 Planning to check on the bull once the bobcat and driver had left, investigators briefly pulled back from the area. However, the bobcat driver did not stop at the struggling animal, he just picked up several bales of hay that were piled up next to the bull, presumably to feed some other animals in the pen area.

Once the bobcat left the area, investigators immediately returned to the bull to check on him. He was still struggling and in obvious agony. Investigators called the police to request help in ending the horrific suffering of this animal.

A female police officer from the Yellowstone County Sheriff’s Department arrived at the sale at 2:15 p.m. She immediately approached one of the workers – whom she apparently knew. Investigators overheard him telling her “It was a very busy day, they probably just didn’t get to it, let me know if you need help with this cow.”

Investigators then walked with the officer to the manure pile, where the bull was still clearly struggling and in pain. In fact, by then, he appeared to be in even more distress, as his legs were jerking sporadically and he was rearing up.

Our investigators spoke with the officer, adamantly requesting that the bull be euthanized immediately. They also detailed the strange events that had led to this bull’s rapid decline, namely the maneuver with the bobcat and the tanker truck with an unknown liquid that appeared to have been administered to the bull.

Completely unimpressed, the police officer was in no rush to put the animal out of his suffering. Instead, mentioning that she had grown up on a cattle farm, she stated that she was not “unfamiliar” with this kind of situation.  Although she promised to “go talk to someone” after taking down our investigator’s personal information, her lackadaisical attitude was very concerning. 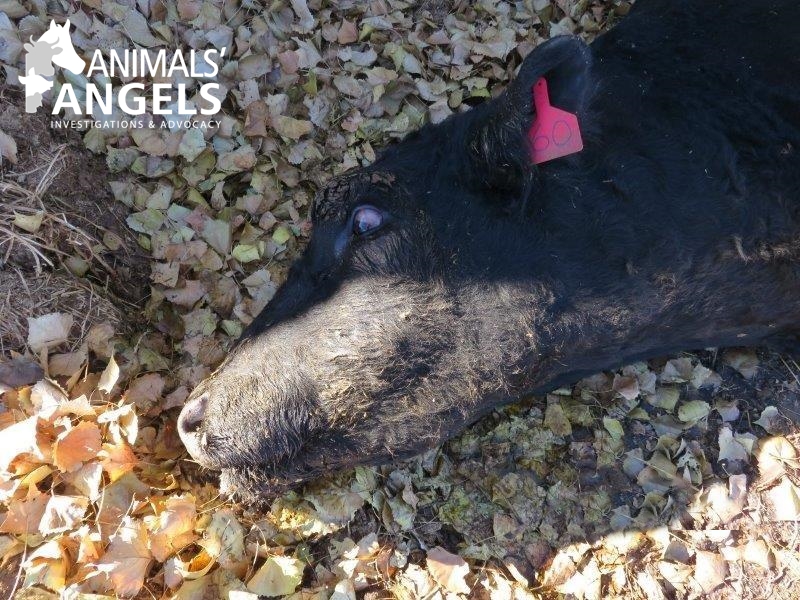 The investigator again strongly pointed out that this should be a clear case of animal cruelty since the animal had been left struggling for such a long time. The police officer did not react to these statements and instead left the location and drove to the front of the auction to presumably speak to someone from the auction.

Auction employees had evidently been alerted to the situation and due to the large number of individuals on guard in the area, our investigators were unable to return to check on the bull’s condition. We can only hope that either the police officer or the auction humanely euthanized the bull shortly thereafter. 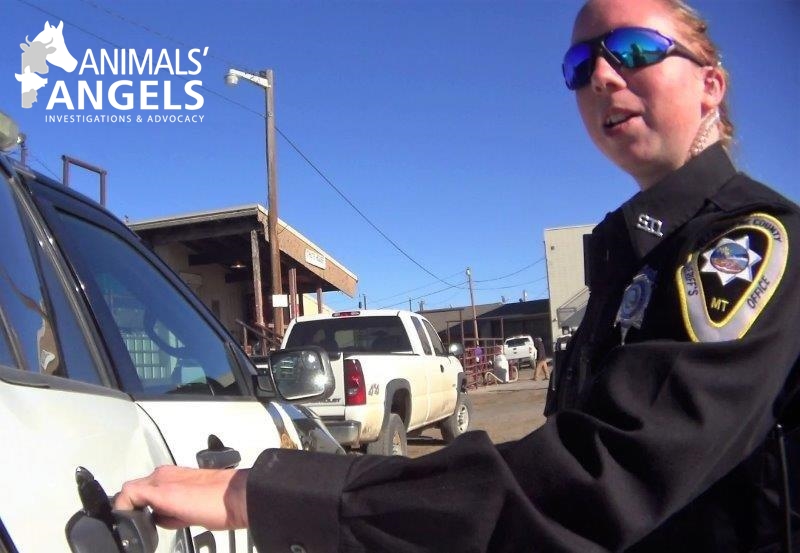 Even after the fact, pertinent information as to the bull's demise and enforcement action was not forthcoming from the responding officer or the Yellowstone County Sheriff's Office. The incident report provided upon our request was completed redacted, including the circumstances of the complaint itself. Further, AA was denied any and all information as to the incident, action taken, and follow-up, if any was even taken.

The Billings Livestock and Horse Sale continues to be one of the major kill sales in the country. Despite a sign prominently posted at the auction entrance that no injured or sick animals are accepted for sale, our investigators have observed the contrary every single time we have attended this sale.

Needless to say, Animals’ Angels will report all observed violations to the relevant authorities. Furthermore, we will present a detailed report and video footage to the Billings District Attorney’s Office, asking for cruelty charges to be filed.

It remains unclear what was done to the bull that caused the dramatic change in his condition, but whatever it was caused tremendous suffering and should never have been used. Animals’ Angels will work to get to the bottom of this matter so that the responsible parties can be held accountable, and more important, ensure it does not happen again.