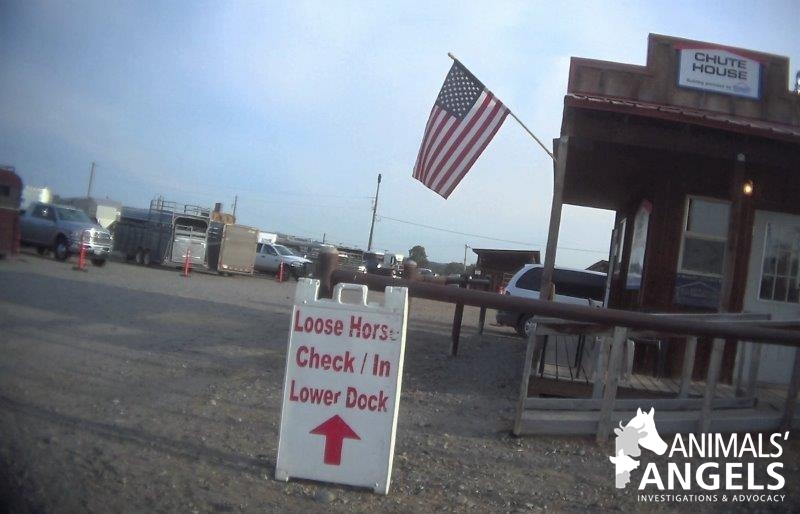 Animals’ Angels investigators arrived at the sale on August 27th at 7:00 a.m. The sale was extremely busy with 905 horses for sale -- 415 of which were selling as “loose”/slaughter prospects.

Investigators observed that all the pens had access to hay and water, but there was no shelter available. Several of the pens were extremely filthy and covered in a mix of manure, urine, and mud. 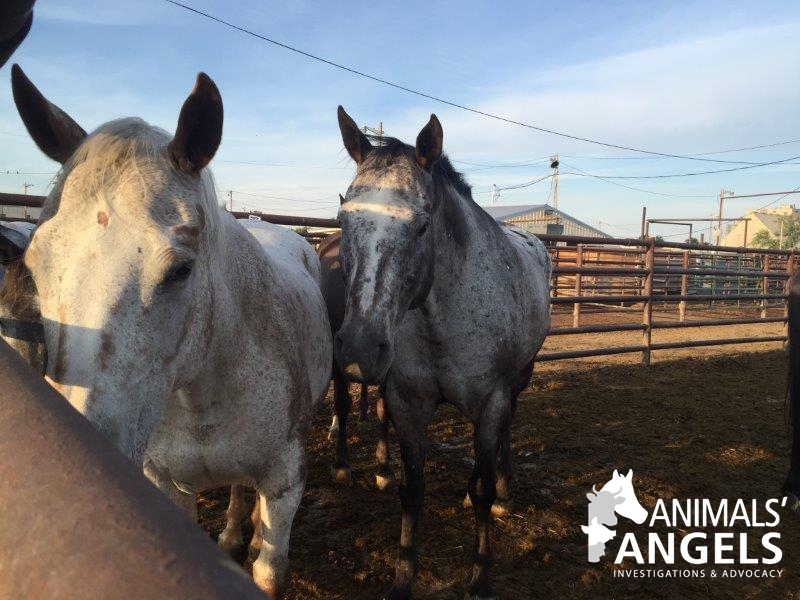 Investigators noted that the overall condition of the loose horses had changed compared to our last visit to the auction with almost no thin horses being present. On the contrary, many of the horses appeared to be overfed.

Per the seller information attached to each pen, the majority of the sellers each brought in multiple horses and many of them were from out of state. Investigators couldn’t help but think that many of the animals present at the sale had been fattened on purpose to attract kill buyers. 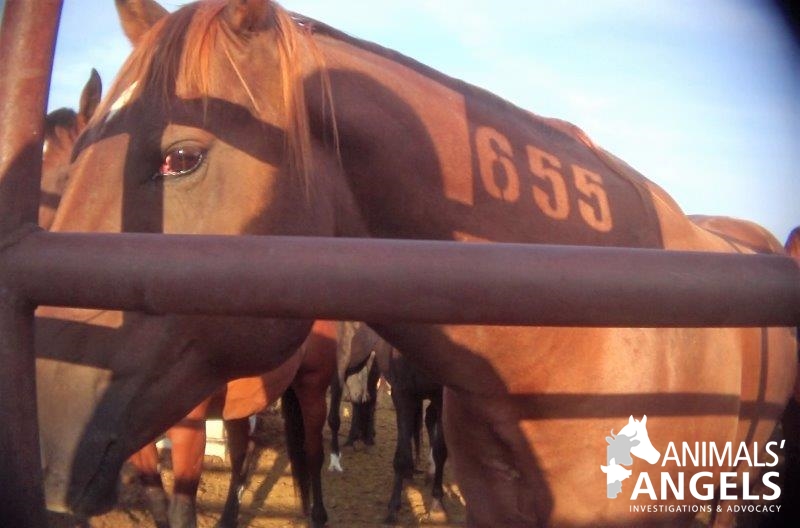 Walking through the extensive pen area, investigators noted that several mares with their colts as well as small ponies had been put together in the pens with other adult horses of a different gender. This caused unnecessary fighting and agitation in the pen area, which could have easily been avoided by segregating these animals. Also of note was a Palomino gelding (Tag # 1100) who was thin and had obvious trouble walking. He was observed slowly limping from one side of the pen to the other and he tried to stay away from the other horses. 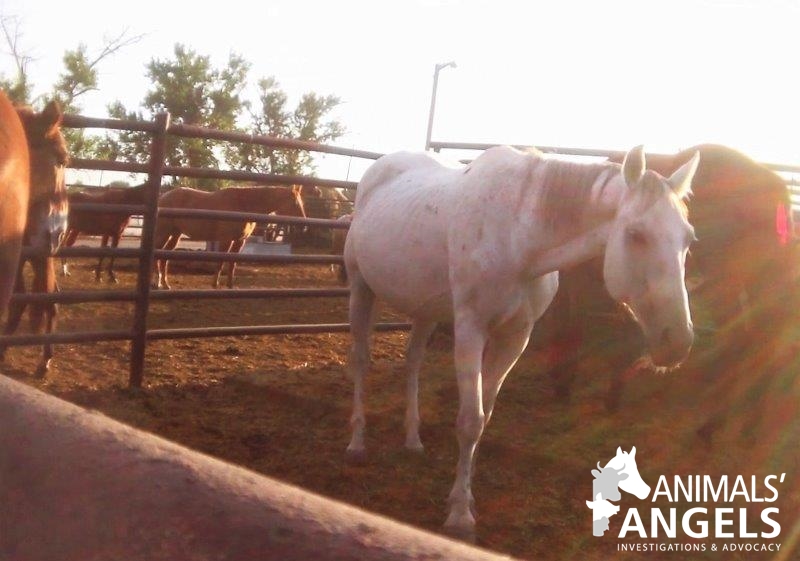 The loose horse sale started at 8:07 a.m. Large scale kill buyer Mike McBarron from Texas and Jason Fabrizius, a kill buyer from Colorado, were in attendance as well as an unknown buyer purchasing for the Canadian Bouvry plant. Fabrizius and McBarron were sitting next to each other and acted very friendly, apparently bidding together under Number 463. The buyer for Bouvry sat across the room from them and was bidding under Number 398. The Bouvry buyer battled fiercely with McBarron/Fabrizius over each horse rushed through the ring. 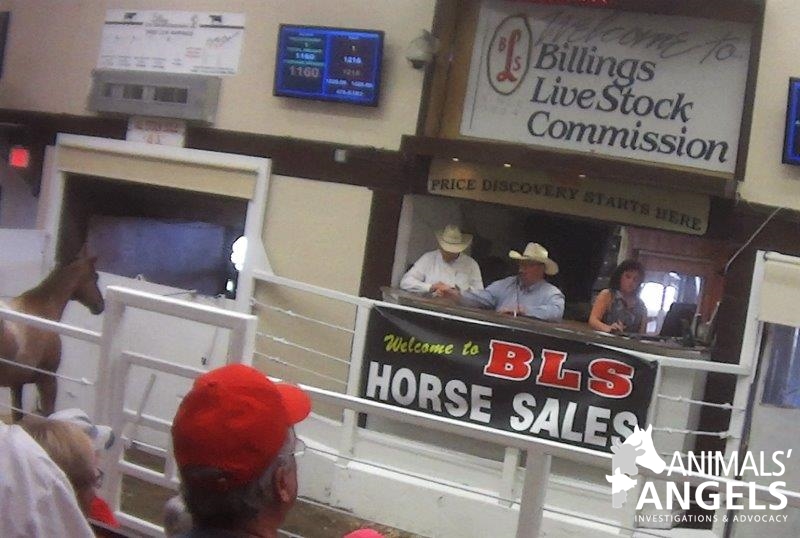 The sale ended at 10:05 a.m. In two hours, 415 horses were sold, giving each individual horse merely seconds of exposure in the auction ring and any private buyer just a very short window of time to compete against the seasoned kill buyers.

The heaviest “loose” horse sold at the sale this day weighed 2400 lbs. The most expensive “loose” horse fetched a price of well over $1500.00. 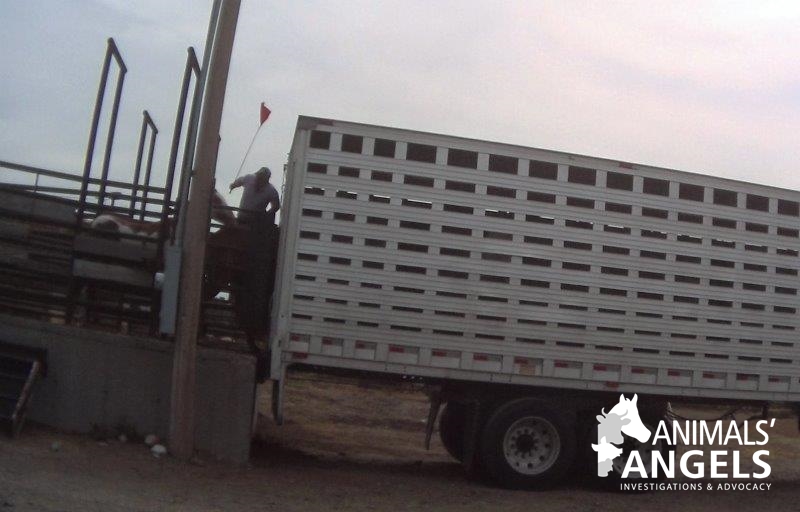 At 11:22 a.m., Fabrizius’ blue semi with single deck trailer pulled up to the loading ramp and started loading horses. The loading was complete mayhem, as Fabrizius and his driver showed absolutely no patience or concern for the horses whatsoever.

Investigators witnessed the two hitting the horses over the face, head and body as hard as they could. Several horses panicked and reared up, trying to escape the chute but to no avail. Others slipped and fell in the chaos. 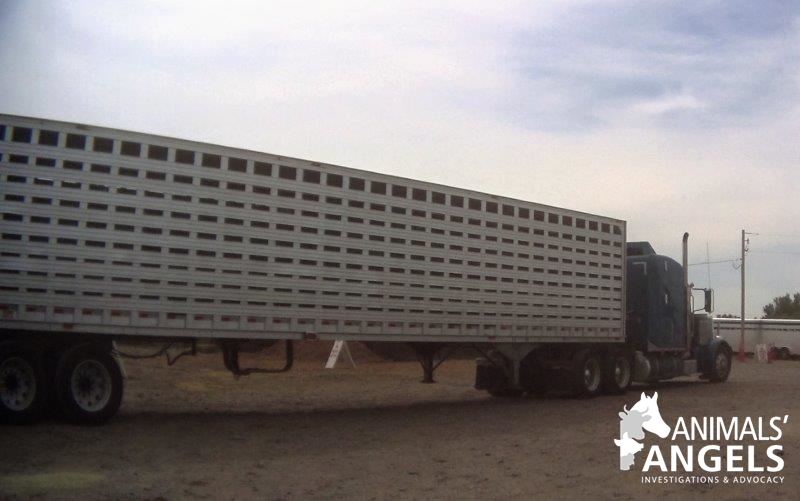 The loading was finished in 15 minutes and the truck left the premises immediately thereafter. Fabrizius himself stayed behind with his second truck and trailer, which did not have any DOT number or company information displayed, a clear violation of FMCSA regulations.

Fabrizius was the only one who loaded right after the loose horse sale. The other horses that had been sold to kill buyers were put in large pens at the back of the premises. 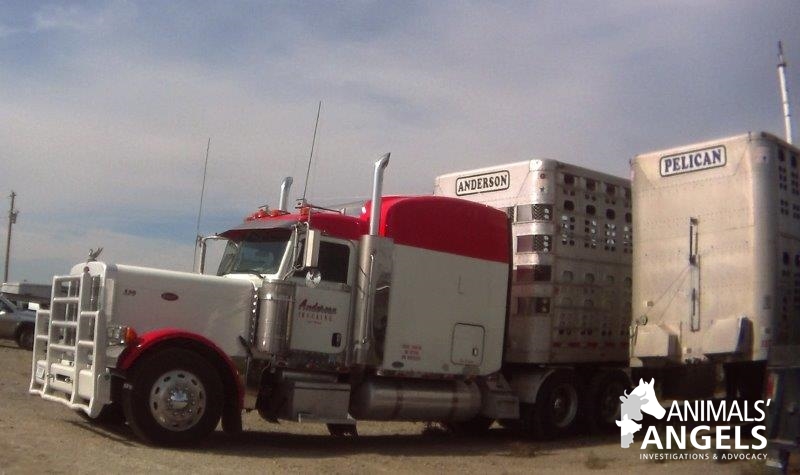 Anderson Trucking from Laurel, MT was parked in the lot with his single deck trailer, waiting to transport a load of horses to the Bouvry’s feedlot in Shelby, MT. Investigators noted that the driver did not load until later in the day and subsequently arrived in Shelby during the night.

AA will continue to monitor this large sale due to its importance for the slaughter horse industry. All violations witnessed have been reported to the appropriate enforcement agencies.