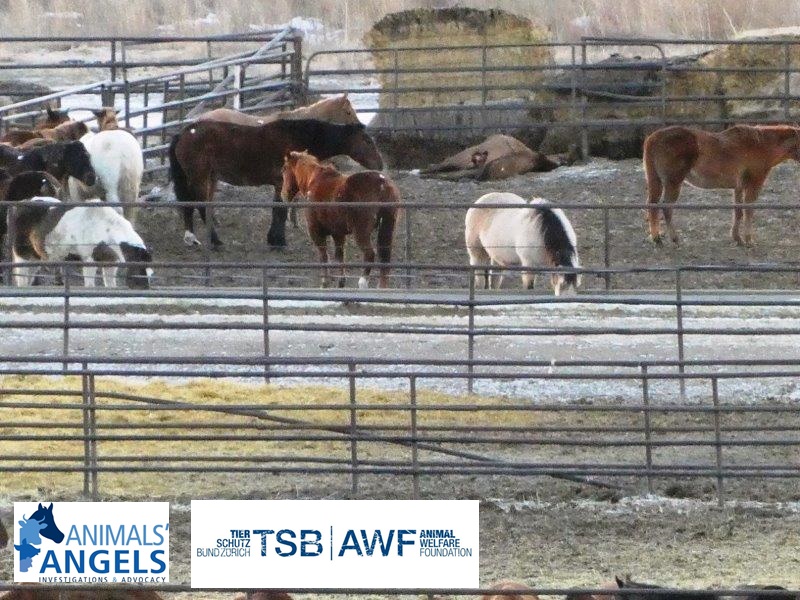 Animals’ Angels has been monitoring the Bar S Slaughter Horse Feedlot for many years. The feedlot serves as the US collection station for Bouvry Exports, a major Canadian horse slaughter company. Previous investigations have uncovered tremendous abuse and neglect, ranging from untreated injuries to overcrowded pens to failure to remove dead animals from the premises. Public records also indicate that multiple loads of Bar S horses have been rejected at the international border because the horses’ health and wellbeing did not meet Canadian standards.

1/28/19: Our investigators arrived at Bar S on the frigid morning of January 28. Overnight temperatures had dropped to 2°F and had only climbed to 13°F by 7:00 am. We observed approximately 700 horses at the facility, mostly contained in the front pens with no shelter from the winter conditions. Hay bales placed along the front and side of the pen areas did nothing to stop the wind, as no guard had been constructed along the portion of the pens where the wind was whipping down from the mountains. 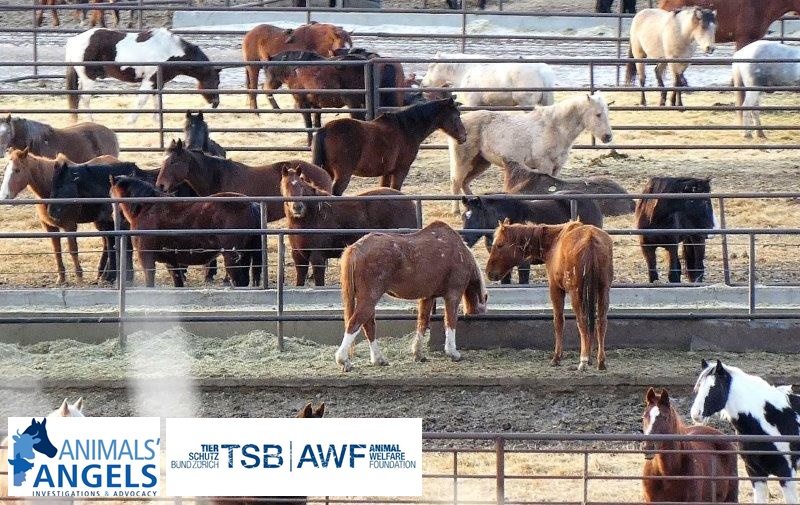 Investigators noted a lot of activity and perhaps an increase in the number of staff at the feedlot. Unfortunately, animal welfare concerns were also plentiful. Mares with young foals were in the same pens as other horses, not separated to reduce stress and risk of injury for the vulnerable animals. Several underweight horses were observed as well as several limping horses. Some horses were covered in old scars or showed imprints from tight halters. In addition, the carcass of a dead horse lay in one of the pens. The state of the body and the damage caused by scavengers suggested the animal had been deceased and laying in the pen for some time.

Most of the horses present had an “S” branded on their neck, designating that they were destined for the slaughter house, but several also wore different colored neckbands. 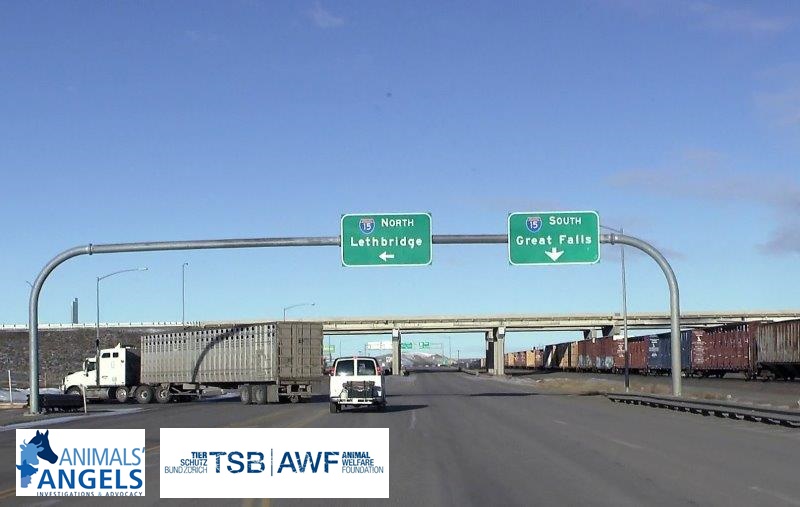 At 8:00 am, a JT Ryan Truck arrived at the lot and pulled into the pen area. JT Ryan has a history of several federal motor carrier safety violations, most severely for driving with tire belt material exposed. Workers began to unload bales of hay, while others transferred a group of 30 horses from the pens to weigh and attach slaughter tags. The workers used flags to move the horses, but many animals began to panic and seemed extremely agitated.

Horses were loaded onto the trailer by 9:00 am, and the truck started heading towards the Canadian border via I-15N.

1/29/19: Investigators returned to Bar S at 7:00 am, again noting subfreezing daytime conditions and overnight temperatures in the negative digits. Snow was falling when our staff arrived at the facilities. 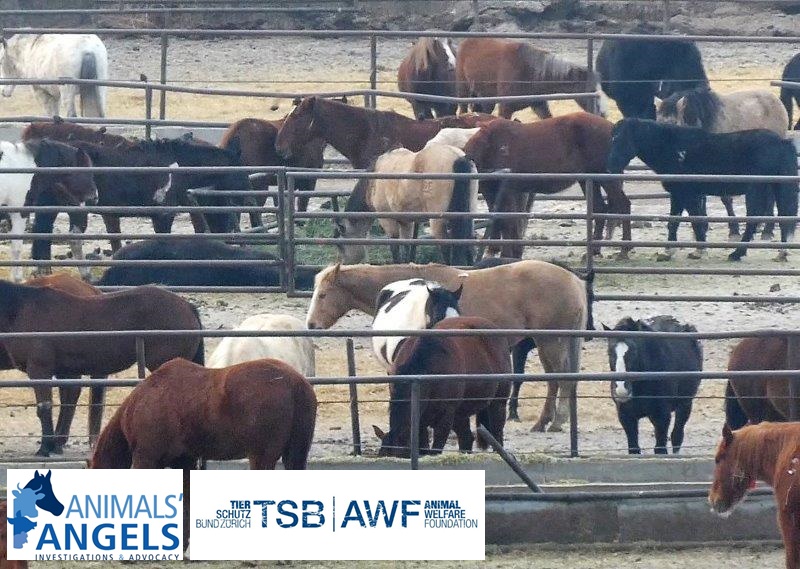 As noted on the first day of the investigation, despite the harsh weather, horses were in open pens, completely exposed to the elements. The previously observed horse carcass had been removed from the pen, but investigators spotted another dead horse next to a feed trough in the middle of the pen area. Several horses were standing directly next to the deceased animal.

The JT Ryan truck arrived on the same schedule. Hay was unloaded and another group of 30 horses were prepared for transport. Again, horses became agitated and anxious when moved. One worker was seen hitting terrified horses across the face and body with flags. The transport truck left the facility at 9:40 am and drove in the direction of the border crossing.

1/30/19: Our investigators arrived as the feedlot at 8:10 am, under similar weather conditions as previous days. The JT Ryan truck arrived at the facility and the same procedure ensued, although the front pens appeared more crowded that earlier in the week and horses were seen fighting. Some of the horses were still wearing auction tags. Another group of 30 horses were loaded on the truck, and the truck departed the feedlot.

Through our investigations, Animals’ Angels has determined that a shipment of horses leaves Bar S Slaughter Horse Feedlot every morning, destined for slaughter in Canada. We have also confirmed that Bouvry Exports has not improved conditions at the Montana feedlot, despite our previous investigations and negative feedback from the European importers. Again, there was no shelter from extreme winter conditions, mares with foals were not separated from the other horses, the handling was rough, and the pen conditions were poor. Several horses were in emaciated condition. Most disturbingly, dead horses were left to rot in the pens, in the middle of all the other horses.

Animals’ Angels will report these new observations to authorities in the United States—and the European Union, where the horse meat is destined for import—and we will continue to monitor conditions at this feedlot.