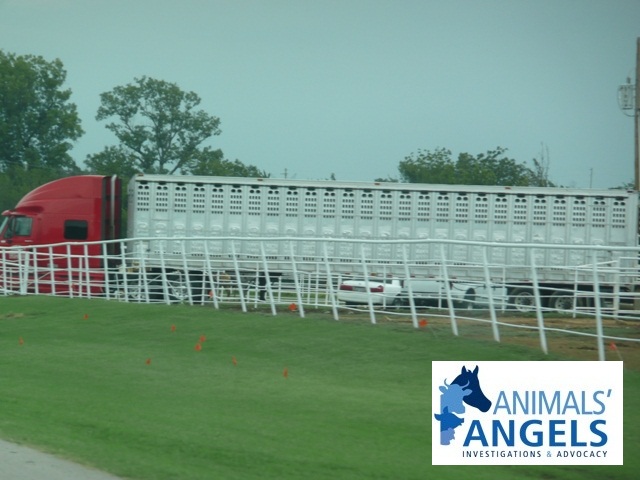 Animals’ Angels visited the feedlot of known kill-buyer, George Baker, on 8/8/2013. Investigators arrived at 09:00, and found approximately 200 horses on the property. The majority of the horses were in the back pens. Approximately 50-60 horses were in the front pens. Baker’s red semi without a trailer was parked on the side of the house, and his white semi with a single deck trailer hooked up was parked around back.

At 09:50, investigators found that approximately 30 horses in one of the front pens was in a single pen and now had the green USDA slaughter tags attached. At 10:17, the slaughter horses were moved around back. At this time there was no other activity and all the trucks were still parked where we found them earlier. 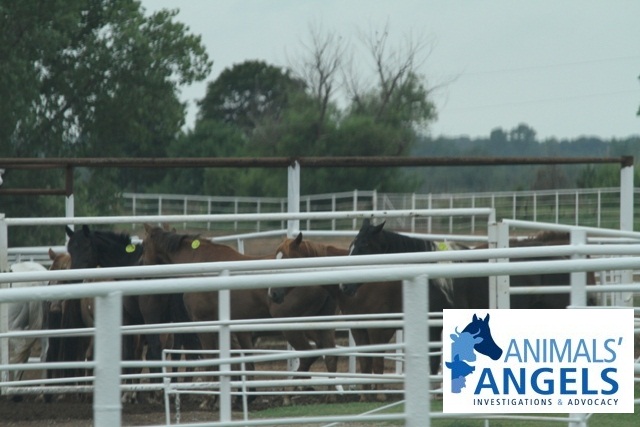 At 11:14, a one ton pickup with OK tags and a gooseneck livestock trailer arrived and proceeded to unload 8 horses. At 11:30, a white semi (no sleeper cab) with single deck trailer arrived and unloaded an unknown number of horses. It appears that Baker acquires horses privately as well as at auctions.

At 12:24, Baker’s white semi pulled around to the front and parked, but at 12:49, the white semi moves back around to the rear of the building and the red semi now with a single deck is empty and backed up to the loading ramp.

There was no further activity until 15:17, when horses began to load. At 15:32, with the horses loaded, the truck pulled out of the feedlot and began the 14 hour journey to the export pens in Presidio, TX. Baker’s truck drove south and west through Oklahoma, traveling 10-15 miles below the speed limit. 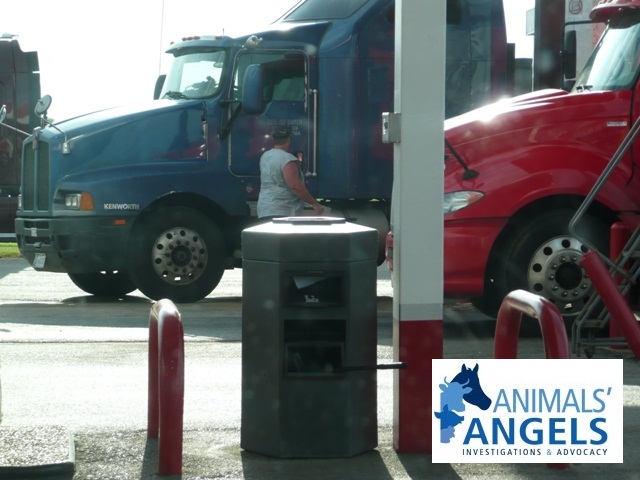 At 18:39, the truck pulled into the Oklahoma Welcome Center near the Texas border and began fueling. Two men exited the truck, one went inside the McDonald’s and the second remained with the truck. A second, empty Baker truck arrived from the north bound direction and pulled up beside the red semi. A young driver got out of the second truck and entered the red semi, while the two drivers originally with the red semi, got into the second semi .

At 19:00, the second Baker truck left the welcome center and headed north, presumably back to Baker’s feedlot. The red semi left and continued southwest toward the Texas line. 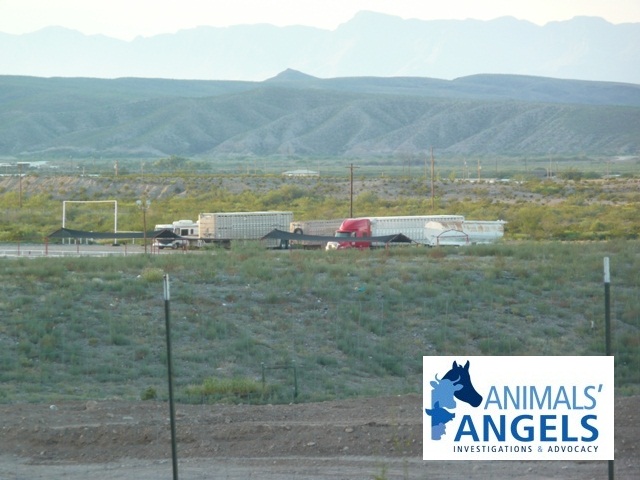 At 23:08, the driver stopped again at a rest area. Investigators continued to the next gas station to refuel and waited there for the truck to catch up with them. However, due to the darkness, they were not able to locate the truck and therefore continued driving towards Presidio in order to catch up with him. At 3:00am, they noticed a red truck of Jimmy Willis Farms loaded with horses and decided to follow it down to the pens.

The driver exited the highway at Monahans, TX and stopped to purchase food. 15 minutes later, the truck continued towards Presidio.

At 05:30am, the driver reached Alpine, TX and he pulled off to the side of the road. During this stretch, investigators noted that the truck was swerving side to side, most likely due to the driver being over tired.  At 06:15, the truck arrived in Marfa and turned left heading to Presidio. As investigators followed towards Presidio, the truck again began swerving from side to side drastically and driving at a high rate of speed. On multiple occasions, the truck ran off onto the right shoulder throwing up a shower of rocks, then swerved back across the road and the centerline into the opposite heading lane.

Finally, at 07:22, the truck arrived at the Presidio Export Pens. The Baker truck investigators had followed earlier was already parked in the dry lot next to the C4 pens. The Willis truck also parked and waited for unloading. Public documents indicate that Baker delivers multiple loads each week to the export pens and is one of the largest shippers to Presidio.