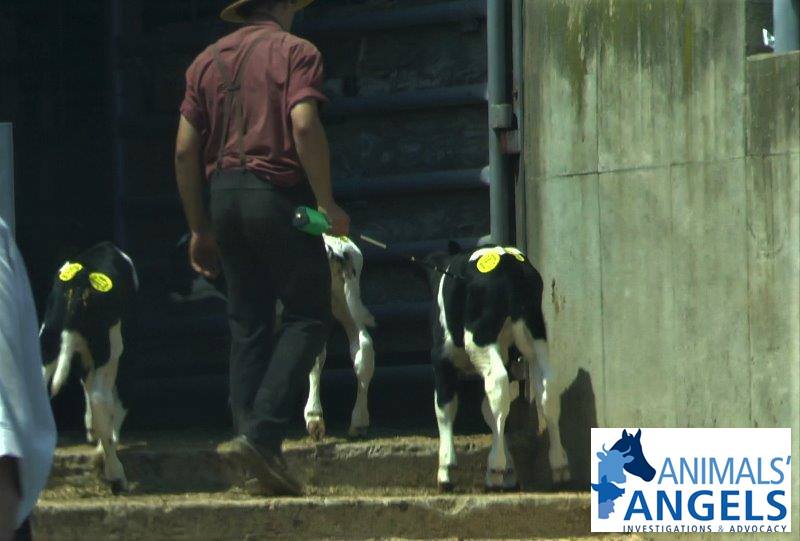 Animals’ Angels investigators arrived at the sale at 9:00am. The parking lot was already completely full. Pickup trucks with horse/stock trailers from New York, New Jersey, Virginia, Colorado, Maryland, Illinois, North Carolina, Massachusetts, Tennessee, West Virginia, Montana and Alabama were observed, many without a DOT number. Despite the fact that it was already very hot and humid, investigators saw several horses tied up outside in full sun without access to water.

At the main loading dock, trucks were unloading baby calves. The calves struggled to get up the steps and stumbled multiple times. One of the individuals unloading them was observed using an electric prod, which is completely unacceptable even by industry standards and considered a violation of animal protection regulations in several states. 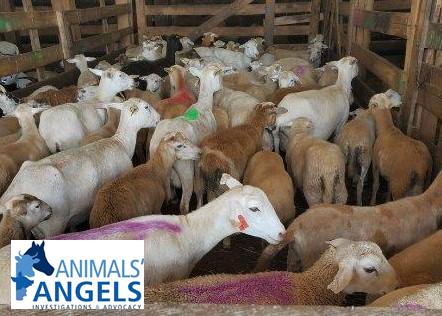 Inside the horse barn, the tack sale was already ongoing. According to an announcement made by the auction, there were 200 horses for sale. The stands were crowded with spectators and despite the ongoing coronavirus pandemic only very few people wore masks. Even the auction veterinarian, Dr. Holt, was observed with a mask dangling around his neck below his chin while walking around the barn and chatting with countless individuals.

The sale began at 9:45am with loose horses, followed by riding horses with ponies and minis mixed in. Several horses were in overall poor condition, a few appeared lethargic and had apparent trouble walking as they moved through the auction ring. Known horse traders and kill buyers in attendance included Rotz Livestock, Carl Fisher, Cranbury Auction, Brian Moore, and Cedar Ridge Farms.

The horse sale ended at 2:15pm and the loading dock became a flurry of activity as buyers began loading. Carl Fisher was among the first ones to load, followed by Brian Moore and Cedar Ridge. 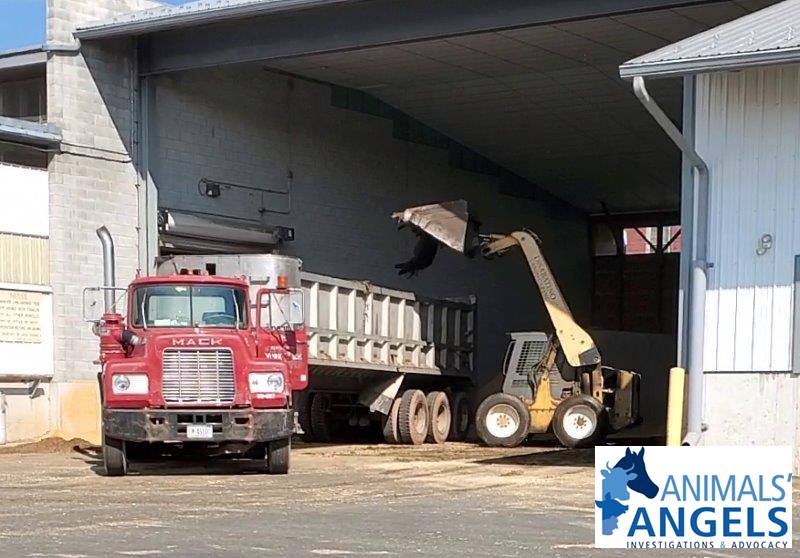 The temperature had risen to 90 degrees Fahrenheit and many of the animals were clearly in distress. As usual, a lot of the pens inside the sheep & goat stable and the pig barn did not have access to water and several pens were very crowded. The excruciating heat claimed its toll: When investigators went to check the dead pile, they observed a truck picking up dead animals. The auction skid loader was used to dump the carcasses into the trailer and it took five trips to get all of them loaded.

Animals’ Angels will continue to monitor this sale and report any violations observed to the relevant authorities.