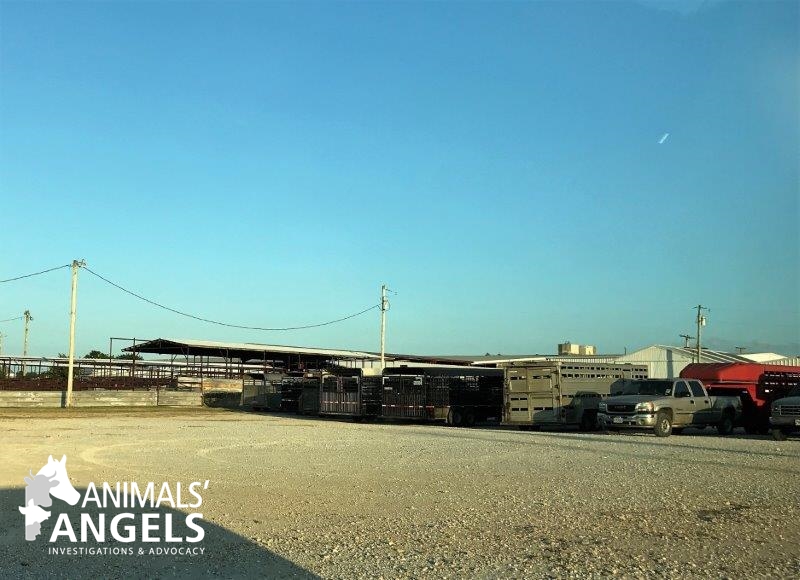 TS Whites LLC in Diamond, MO holds a monthly horse, pig, and small animal sale on the 2nd Tuesday of every month.  This sale is frequented by multiple kill buyers from Kansas and Missouri as well as horse traders representing broker programs from both Kansas and Missouri, likely due to its central location.

While ostensibly owned by Tim White, our research during this investigation uncovered public records indicating that the auction property was sold to him, under the name of TS Whites, LLC, for exactly $1.00, by Oklahoma kill buyer Cecil White, who has also been linked to the Welch Livestock Auction. 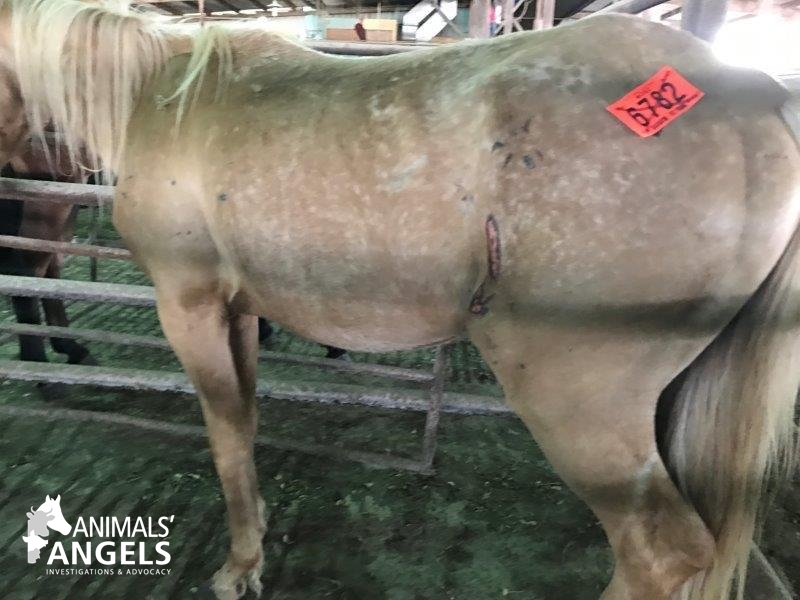 Within 24 hours of the property ownership transfer, the property was then apparently used by Tim White as collateral to secure a loan in the amount of approximately $760,000 - the reason for which is unclear.

In addition, AA connected Cecil White with White's Equine Sales in the past, and the website, Missouri Horses, touting itself as Missouri's #1 Equine Website Directory, still lists Cecil White as the current owner/manager of Whites Equine Sales - which just so happens to share the same address, phone number, and other contact information as TS Whites, LLC. 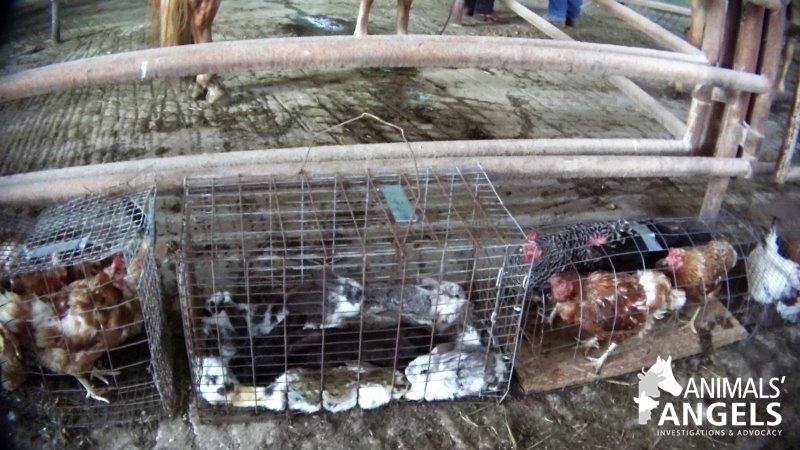 Another link connecting these two businessmen is an ad from June of this year, found in "The Big Nickel," an advertising publication out of Joplin, Missouri that clearly shows Cecil and Tim soliciting horses from an unsuspecting public.

The TS Whites LLC property is a large auction arena with covered pen areas that can be observed from a catwalk. There are also a number of barns, outside pens, and multiple loading ramps. 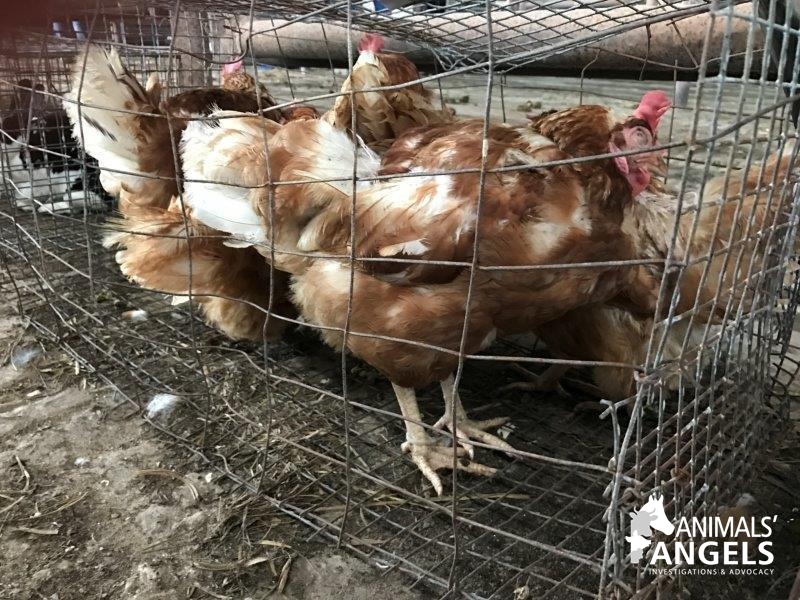 Upon arrival, inside the covered pen area, investigators found countless cages and cardboard boxes filled with animals placed in one of the dusty alleys. Many of the cages were broken and in disrepair. Nonetheless they were stuffed with animals and then subsequently stacked on top of each other.

Investigators observed many cardboard boxes containing ducklings – none of these boxes had airholes. There were also plastic boxes, meant only as temporary moving containers, holding guinea pigs; these boxes had tiny airholes which were by no means close to adequate to allow for minimal ventilation let alone fresh air flow for the many animals inside. 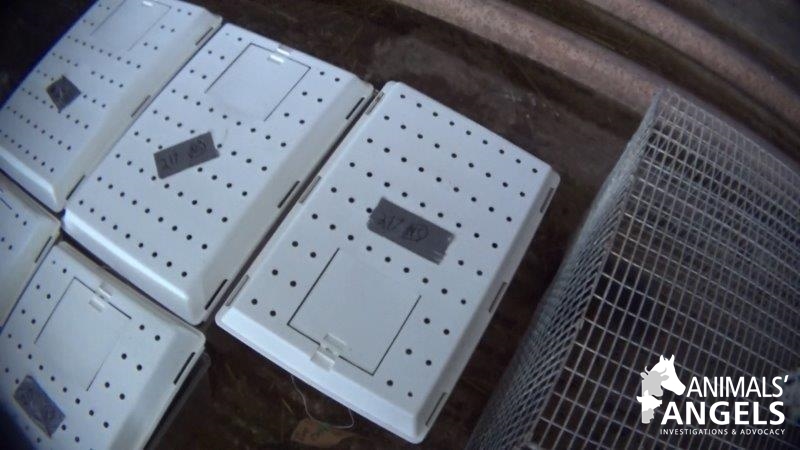 All animals seen were obviously struggling, no doubt due to the heat. It was a minimum of 92 F throughout the day.  No water was available to most of the animals and none had been provided by the auction. Several chickens were observed in very poor condition, many with entirely bare behinds due to a complete loss of feathers.

In the pens investigators counted 54 loose horses/slaughter prospects, 18 riding horses, and 7 ponies. No food or water was available. Many horses were in a neglected condition with ribs clearly showing. 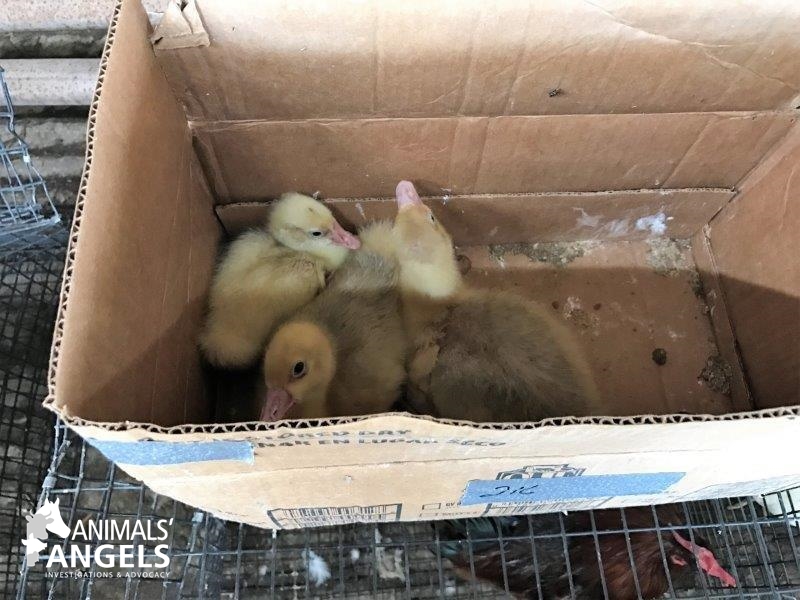 Several were covered in scars and/or small bleeding injuries.  Most seemed very scared of human touch though it was unknown whether this was due to abuse or simply not being previously handled.

In one of the pens, a chestnut horse had two serious leg injuries that were bleeding profusely, an injured left front knee and a swollen right hind leg with a bleeding fetlock.  He was also covered in red sores and scars on his hips, neck, and face.

He was in obvious distress, continuously licking his wounds and desperately trying to rest the injured legs. There was no sale tag attached, but he had been placed in the middle of the pen among all the other horses who were clearly destined for sale. 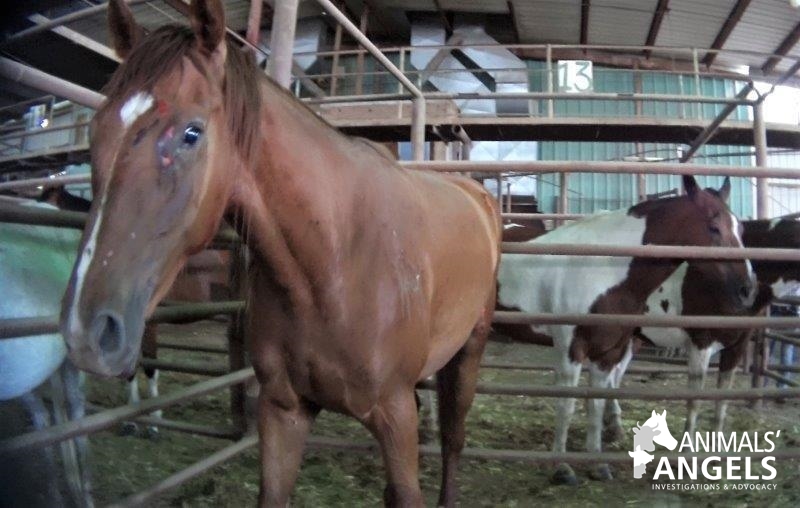 Investigators watched as several people stopped at the pen and looked at the chestnut, even interacted with him, but no one seemed to be overly surprised or dismayed

to find a horse in this condition at the sale. One was overheard saying: “Well, this one isn’t going to a good home for sure.”

Since this was our first visit to this particular auction, in addition to looking into the condition and treatment of the animals, it was important for us to assess the behavior and attitude of auction employees and management. Therefore, after documenting the condition of the injured horse, an AA investigator approached the auction’s office to discuss the chestnut horse with the grievous injuries and to urge them to provide immediate vet care. 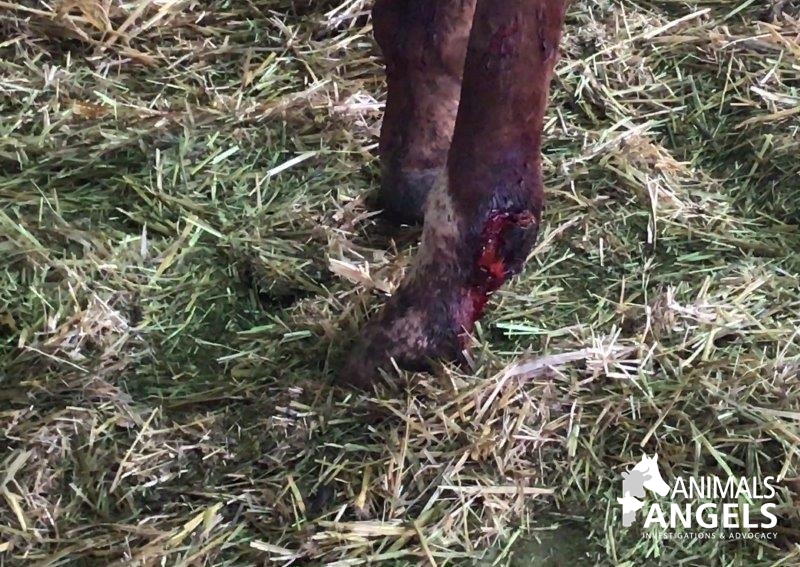 We were met with complete indifference by auction management. No-one seemed concerned or in any way inclined to take action on behalf of the animal who was in their care and therefore their responsibility.

When our investigators inquired if there was an auction vet on the premises to administer vet care to the horse (or any animal in need), they were informed that the vet would be in the pen area, drawing blood for Coggins.

Disappointed in the office’s lack of interest in the suffering horse, investigators returned to the pen area to locate the vet, hopeful he or she would take an interest and more important, take action. 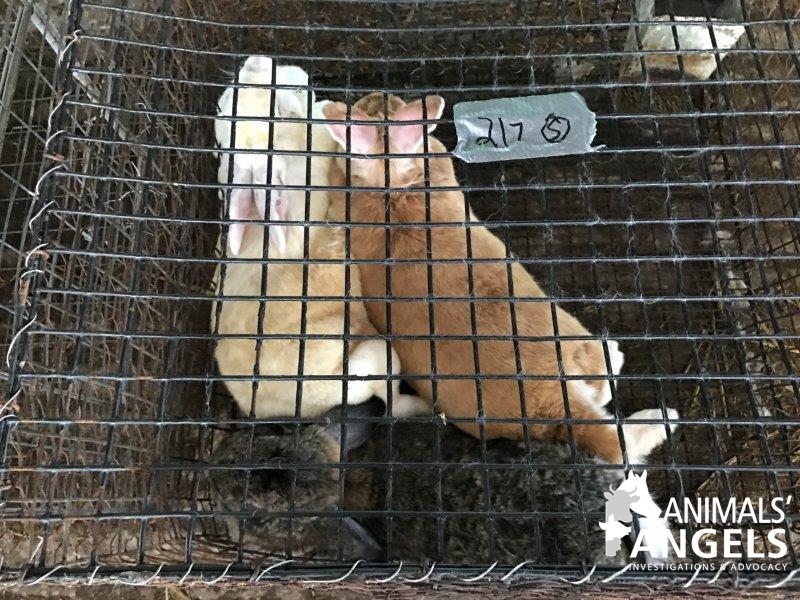 After searching the entire pen area with no success, investigators were finally able to locate the vet, who was in fact not in the pen area but rather, he was in a small trailer all the way to the back of the premises. When confronted about the horse, he admitted to accepting the horse for sale, knowing full well about the injuries. He stated that the horse in question was “crazy and dangerous,” and had injured himself. He was not willing to provide any vet care or offer any help for the suffering animal.

Investigators found the vet’s statement about the horse being “crazy and dangerous” questionable as they had clearly witnessed several auction goers approach this horse, speak to it, and even touch it, and the horse did not back away, flatten its ears, flinch, toss its head, or show any fear or agitation in any way. Neither did he appear to have any issue being in a pen, surrounded by other horses. For liability reasons alone, one would think the auction would take at least basic precautions if the auction vet truly thought the horse was “crazy and dangerous.”  And yet, the horse was in a heavily trafficked area, easily accessible by the public, including children.  There were no signs posted cautioning the public of a dangerous animal. 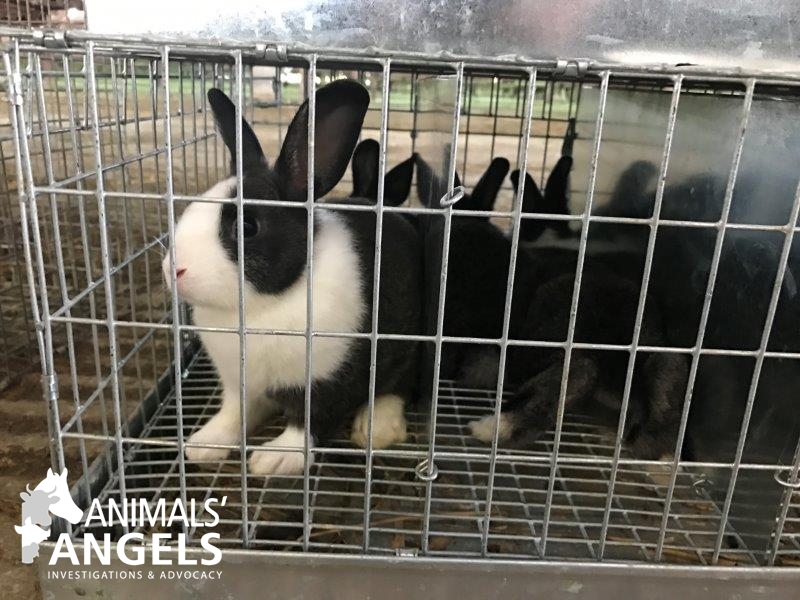 After being advised the vet would not assist the injured horse, AA investigators immediately returned to the pen to check on the horse and to call law enforcement.  Shockingly, the horse had disappeared. An immediate and complete search of the auction premises was unsuccessful in locating the animal, the horse apparently having been removed completely from the premises or to a closed area out of sight.

Inquiries to auction workers was met with “What horse?”  Obviously without the horse, there was no way to hold anyone accountable. While nothing could be done at this moment, investigators were in no way going to let this issue rest. 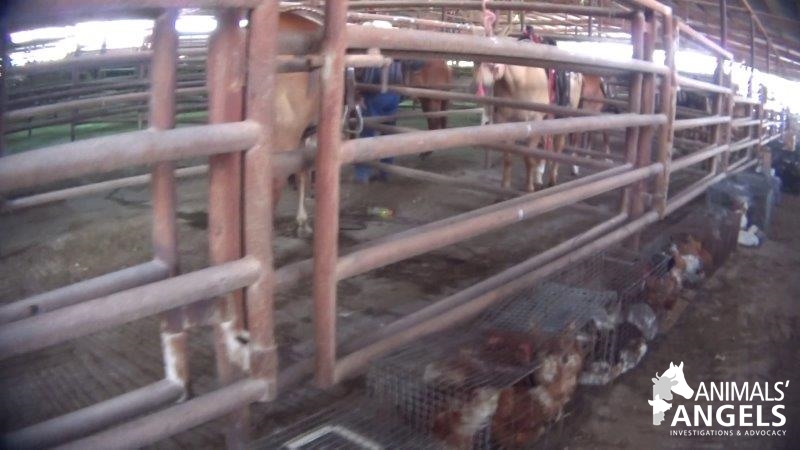 As for the sale itself, circumstances were no better and neither was the attitude of the auction workers. The tack sale started at 5:00 p.m., followed by the horse sale. Handling by auction employees was completely chaotic and impatient, with a great deal of hitting and poking of the animals. Loose horses were moved to the ring at very fast pace, each one spending just moments inside the ring. Most of the horses were bought by buyer 331 and buyer 316, and were immediately moved from the ring to large pens, divided by buyer.

There was absolutely no regard for aggressive horses or stallions; all were put into pens together, resulting in immediate fighting, kicking, and biting. Rather than show concern or separate the animals, auction staff watched and laughed, apparently finding the fierce fighting and chaos amusing. 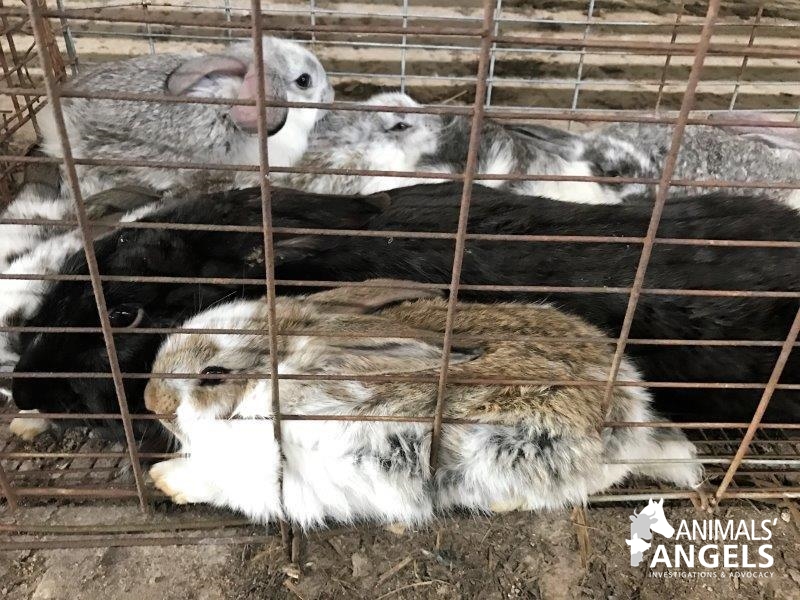 Needless to say, Animals’ Angels will return to this sale as this is definitely an auction that needs increased monitoring and attention. The attitude of the vet along with that of auction management, combined with the terrible conditions for the animals is completely unacceptable.

While we may not be able to get justice for the injured chestnut horse who simply disappeared, we can certainly make a difference for the hundreds of other animals who have the misfortune to find themselves at this sale. At a bare minimum, the following changes need to be implemented immediately:

Although complaints will be filed based on our observations, and we will strongly urge the auction to improve, we need the help of our supporters to raise more awareness and promote the positive changes the animals going through this sale need and deserve.

We will be encouraging our supporters to voice their complaints against the cruelty and neglect at this auction by reaching out to TS Whites, LLC and the City of Diamond, MO, as well as the Newton County Commissioners.